ROME — Protesters turned out in force on Saturday for rival demonstrations on a bill that would make anti-L.G.B.T. violence a hate crime carrying harsher penalties than under current law, coming out by the hundreds in Rome despite a resurgence of coronavirus cases in the country.

Demonstrations were planned throughout the country ahead of a parliamentary vote planned for this coming week, with supporters framing the measure as a long-overdue means to provide basic human rights and protection from attack, and opponents depicting it as an overreaching step that would also suppress opinion and religious beliefs.

“We have been through centuries of discrimination,” said Marlon Landolfo, 21, who recounted a vicious homophobic attack on him and another man in northern Italy last month. “Now it’s 2020 and we are still discussing a law that protects us for what we are.”

The bill under debate would explicitly recognize anti-L.G.B.T. and anti-women hate crimes and hate speech by including those offenses under an existing law that makes discrimination, violence or incitement to violence based on someone’s race or religion a crime punishable by up to four years in prison.

Current law does not have a specific designation for such offenses against L.G.B.T. people, and as a result, homophobic or transphobic assaults are tried on lesser charges than racially motivated or anti-Semitic ones. 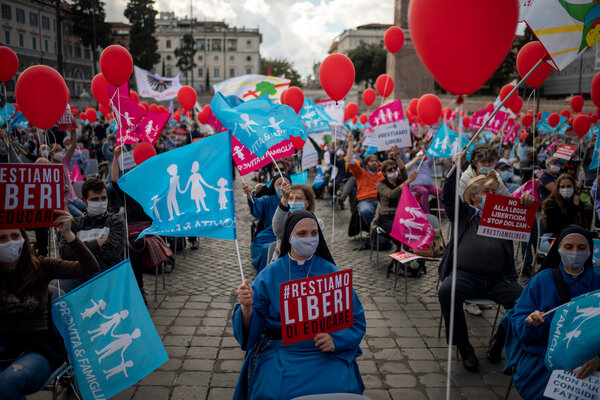 The bill, which appears to have the support of a parliamentary majority, makes discrimination based on sex, gender, sexual orientation or gender identity an aggravating circumstance, which could mean added time to sentences.

Decades of efforts and multiple attempts to extend protections to L.G.B.T people have failed in Italy, making the country an outlier among Western European democracies such as Britain, France and Spain. Italy approved same-sex civil unions in 2016 but does not allow same-sex marriage.

Within the European Union, it is joined by Poland, the Czech Republic and Bulgaria in not responding to European Parliament appeals for member states to prosecute hate crimes and hate speech motivated by homophobia and transphobia.

Supporters of the bill face resistance from traditional opponents such as conservatives and the Roman Catholic Church, but also from some less expected corners, such as one group of feminists.

Proponents say a change would allow the authorities to keep statistics on homophobic and transphobic attacks, provide a deterrent and send a clear message that these are hate crimes.

Mr. Landolfo, his ankle still sore after a beating last month in the city of Padua, said he felt disheartened by the debate around the new bill. He and another young man, Mattias Fascina, had held hands and exchanged a quick kiss during a date on a September night when a gang mocked them, then punched and kicked them while shouting homophobic slurs. Under Italian law, the pair cannot be considered victims of a hate crime.

The attack on Mr. Landolfo is not an isolated case. Arcigay, Italy’s leading L.G.B.T. association, records more than 100 episodes of violence, hate and discrimination every year. In September, in the northern city of Novara, a man kicked his lesbian neighbor and broke her nose. In the city of Bergamo, residents of an apartment complex insulted and threatened two homosexual neighbors, prompting them to temporarily move out of their apartment.

“These episodes rarely turn into official complaints,” said Francesca Rupalti, a lawyer with Rete Lenford, a network of lawyers for L.G.B.T. rights. “Without a specific law, it is hard to prove homophobic acts.”

Alessandro Zan, a member of Parliament with the center-left Democratic Party who proposed the bill, said its ratification would denote a significant cultural shift in a society with deep patriarchal and conservative roots.

Unlike the United States, where speech is largely protected by the First Amendment, Italy and many other European countries scarred by fascism and Nazism have stricter laws against preaching racial or ethnic superiority. They have also outlawed blatantly discriminatory associations or groups.

“Laws need to balance freedom of expression and hatred,” Mr. Zan said. “This law says clearly that discriminating against L.G.B.T. people and inciting violence against them is not an opinion.”

Some opponents of the bill say it will cross the line into censorship. They have presented hundreds of amendments — including one that mockingly asked to extend protection to bald or white-haired people — in order to slow down the legislative process.

One objection is that the bill, which opponents have dubbed a “gag law,” could be used to suppress dissenting opinions about same-sex marriage or adoption by homosexual couples. A prominent opponent, Matteo Salvini, the leader of the nationalist League party, said the bill “puts ideas on trial” and has insisted that Italy does not discriminate anyway.

Supporters say the bill would not infringe on free speech or religious liberty. Groups or individuals, they say, will still be able to promote and discuss their values as long as they do not engage in violent behavior or incite violence and hatred.

The nationalist and conservative political opposition has been joined by Italy’s Catholic bishops. That has unnerved advocates for the bill who had been encouraged by tolerant remarks from Pope Francis. The pope told a gay man in 2018 that God had made him that way, and in 2013 famously said “Who am I to judge?” when asked about a priest said to be gay — a dramatic change of tone in Vatican comments on homosexuality.

But the Italian bishops conference, which is influential in domestic politics, has argued that the measure could criminalize expression of the church’s belief that marriage should be between a woman and a man, if it were interpreted as incitement to discrimination.

The bishops said in a statement that Italian law already has tools available to punish violent and discriminatory behavior, and that adding more “incriminatory norms” would threaten liberty.

Some opponents from the left have also joined the fight against the proposed law. Although many leading feminist groups in the Western world have expressed support for L.G.B.T. protections, a group of well-known Italian feminists has criticized the pending bill for embracing a broader definition of women by using the term “gender identity,” which would include transgender women.

In an open letter published on a notable feminist website, the 13 signatories argued that the progress made against sexual discrimination against women in Italy would be undercut if the broader concept of gender identity is applied.

Francesca Izzo, a former member of Parliament with the Democratic Party who signed the letter, said that while it was important to fight homophobia and transphobia, it was a separate issue from the overall rights of women.

Proponents of the law reject that argument.

Mr. Zan, the lawmaker, said that feminists and L.G.B.T. people were fighting the same battle. “Violence against L.G.B.T. people is just another consequence of sexism,” he said. “Anatomy is not a person’s destiny.”