Petrol bombs, bottles and bricks were thrown during scenes of disorder in the city this week. Children as young as 13 were said to have been encouraged to join in by adults, who “stood by clapping”. Some 55 police officers have been injured in the ongoing unrest. So far, 10 people have been arrested.

He said several hundred people on each side of a barrier separating the loyalist Shankill Road and the nationalist Springfield Road in west Belfast were involved, saying petrol bombs were thrown in both directions.

He said: “The fact that it was sectarian violence and large groups on both sides is not something we have seen in recent years. We believe there was a level of pre-planning. 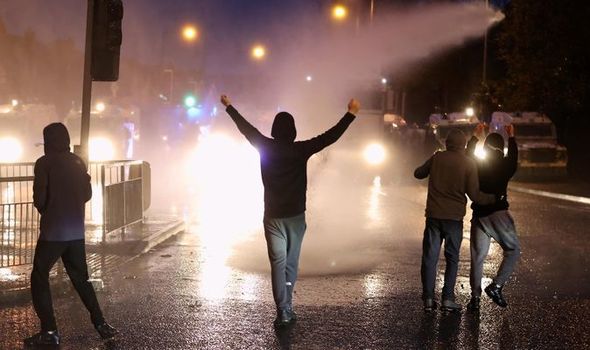 “You don’t come by such volumes of petrol bombs and missiles and fireworks without pre-planning, so there was a scale of planning and ­orchestration to it.

“The crowds grew in numbers and attacked each other with multiple petrol bombs and multiple missiles, including masonry and fireworks, and attacked police. We are very lucky no one was seriously injured or killed last night given in particular the large number of petrol bombs thrown.”

Mr Roberts also claimed children as young as 13 were involved, and were being encouraged and supported by adults.

He said the behaviour from both sides needs to stop and will “achieve nothing other than the potential to seriously injure or kill”. 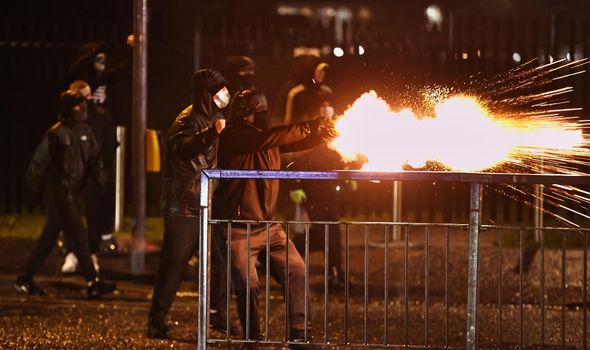 Northern Ireland Secretary Brandon Lewis travelled to Belfast yesterday to meet political parties. He said he was aware of unionist concerns in recent months over the Brexit protocol.

He said: “The right way to express concerns or frustrations is through dialogue, engagement and the democratic process, not through violence or disorder.”

In Washington, President Joe Biden’s press secretary Jen Psaki said: “We are concerned by the violence in Northern Ireland and we join the British, Irish and Northern Irish leaders in their calls for calm.”