In an otherwise difficult year for the Firm, Eugenie and Beatrice both became new mothers. Beatrice, who was already a stepmother to her husband Edoardo Mapelli Mozzi’s son Wolfie, gave birth to Sienna in September. In February, Eugenie and her husband Jack Brooksbank also welcomed their firstborn, August, who was then baptised in the presence of the Queen last month.

Growing up the York sisters had a very close relationship with their grandmother and would often visit the Queen and Prince Philip for tea.

Despite their bond, according to royal expert Ms Seward, Beatrice and Eugenie would adopt a special set of manners when in the presence of the monarch.

Ms Seward was speaking on Channel 5 documentary ‘Beatrice and Eugenie: Pampered Princesses?’ which first aired in 2020.

During the programme, the narrator explained: “Beatrice and Eugenie were also doted on by their grandparents.

“The Yorks lived a short drive away from Windsor Castle and visited often.”

Ms Seward added: “They would often go and have tea with the Queen and Prince Philip.

The documentary also explores the monarch’s relationship with Beatrice and Eugenie, and posits a number of reasons why the bond between the family members is so strong.

Royal expert Angela Levin claimed that the Queen is “maternal” of the two princesses as they are children of divorce.

“And I think perhaps the Queen even felt more maternal towards them.

“They’d had a very hard time.”

Prince Andrew and Sarah Ferguson announced their separation in 1992 when Beatrice was three and Eugenie was days away from celebrating her second birthday.

The couple’s relationship is believed to have begun unravelling shortly after their 1986 marriage, due to Andrew’s long period away with the Royal Navy.

Andrew and Sarah finalised their divorce in 1996.

However, royal commentator Tom Quinn suggested Beatrice and Eugenie’s close relationship reminded the Queen of her own bond with her late sister Princess Margaret.

Mr Queen claimed that Her Majesty “adores” Beatrice and Eugenie as she sees “something of her own relationship as a child with Princess Margaret.”

Despite clear differences in personality, the Queen and her younger sister were always close.

Margaret died from a stroke in 2002 at the age of 71 after years of illness.

Devastatingly for Her Majesty, the Queen Mother died peacefully in her sleep just weeks later at the age of 101.

The York sisters are also incredibly close, with Eugenie and Beatrice having once lived together in a four-bedroom apartment at St James’ Palace.

Like the Queen’s loving relationship with Margaret, Beatrice and Eugenie’s differences in personality brought the pair closer together.

She told the Telegraph in 2008: “We get on fantastically well, perhaps because we do and think different things.

“I am definitely not as polite as Beatrice, I have to say. I tell it as it is.

“I am shyer at first like at a party I will say to Beatrice as we go in ‘Oh, you go first’. But then when we’re actually in, I am much louder and she is far more polite and solicitous.”

Catch up with ‘Beatrice and Eugenie: Pampered Princesses?’ on My5. 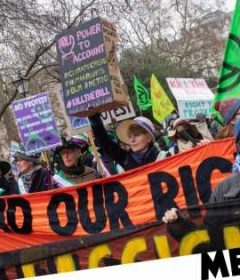