Laura Kuenssberg has predicted the leadership of Theresa May will be coming to an end soon as Cabinet ministers began “parading their leadership ambition” without fearing retaliation. International development Secretary Rory Stewart declared last week he wants the Prime Minister’s job while Chief Secretary to the Treasury Liz Truss launched her leadership bid on Sunday. Speaking on Monday, the BBC political editor said: “She’s in a very, very difficult situation. Outside Number 10 there’s a gruesome carnival of Tory leadership wannabes on full display every time you open the newspaper.

“What does that mean? It means there are plenty of people around the place, including in the Government, who think now we are genuinely in the end days of Theresa May’s premiership.”

The Prime Minister has been facing increasing pressure to resign due to her decision to request an extension to the Brexit deadline until October 31.

Grassroots Conservatives are to haul the Prime Minister in front of an emergency meeting of the National Conservative Convention (NCC) on June 15 to demand Mrs May quit and allow someone else to take over negotiations for a deal with Brussels.

Ms Kuenssberg continued: “This has been an unpredictable time in politics so we should not bake in the fact that suddenly she’s going to be packing her bags. 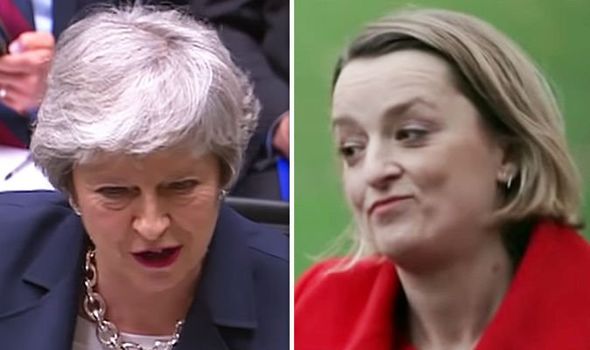 “But the fact that Tory Cabinet ministers see almost no downside to them parading their leadership ambition, tells us there are many people who think this is nearly over.”

Sir Graham Brady, chairman of the backbench 1922 Committee, told Radio 4 on Saturday Mrs May had been asked to give “clarity” at next Wednesday’s meeting after failing to get her Brexit deal through parliament, leaving the government in a state of limbo.

Mr Brady said: “It would be strange for that not to result in a clear understanding of when she will leave at the end of the meeting.”

A Tory Westminster source told Express.co.uk the mood within the party was “hardening” against the Prime Minister, adding: “Either she gets a deal through in the next seven days or she has to resign.”

Meanwhile, Daniel Hewitt, ITV’s political correspondent, tweeted: “Members of the Tory 1922 executive tell me Thursday is D-Day for Theresa May – they’ll demand a departure date when she addresses them, and if she doesn’t, they will vote on a change to party rules.

“‘This is her last chance’ one tells me.”

An Opinium poll of 2,004 UK adults over 18 years old between May 8 and 10 published yesterday on voting intentions for the European Parliamentary elections put the newly-founded Brexit Party on 34 percent, with Labour 21 percent and the Tories in fourth place with 11 percent.

A ComRes survey of 2,034 GB adults carried out online on May 9 of voting intentions for the general election put the Brexit Party on 21 percent to the Conservatives’ 20, which would see Farage’s team win 49 seats, becoming the UK’s second biggest party after Labour, with 137.

In response to the news, Belgian MEP Guy Verhofstadt tweeted: “Farage is a long sitting, career MEP in Brussels, with one of the lowest attendance rates.

“He would rather sign in & go to the pub than fight for British interests in Europe.

“Sending him back would be insane!”