The BBC News host, already famous for his hilarious blunders during his live news updates, found himself in the coastal town of Great Yarmouth this afternoon and interviewed an amusement park owner whilst riding with him on a children’s rollercoaster. Mr McCoy could be seen trying to desperately hold in his laughter as he asked the man how much the coastal town and its economy had changed during the last 70 years.

But when it came to a deep drop on the rollercoaster, the BBC News host could not hold it anymore and burst out laughing causing the man he was interviewing to ask: “You’re enjoying this, aren’t you?”

Mr McCoy replied: “I thought I would!”

The BBC host is famous for his hilarious outbursts on TV. Last month, he amused viewers with the onslaught of puns the presenter had to read while reporting on the Holyrood Dog of the year competition held at the Scottish Parliament.

The event sees MSPs and their pets join together with rescue dogs to promote responsible ownership. 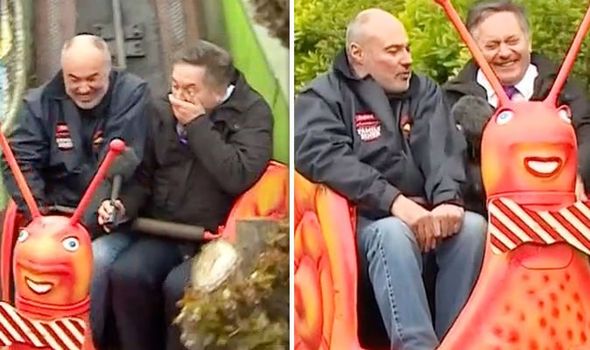 Mr McCoy began by saying: “Fur one day only, I’m going to keep this up so you have to see what I have to put up with.

“Fur one day only, Holyrood has gone to the dogs.

“For the Scottish Parliament’s Dog of the year contest.

“Wait for this, here are the competitors, battling it out to become top dog, that is a familiar phrase.

“Or leave with their tail between their legs.

“Can we just show this autocue, in a pawsitively tough field, the Scotty dogs had to take on a number of obstacles outside the Scottish Parliament.

“Some of them fairing better than others, the competitive field was whittled down to the top three and her owner Jeremy Balfour claiming the prize.

“A ruff day for everyone else.”

At this point the BBC host hung his head in his hands and while laughing says “I trained for this”.