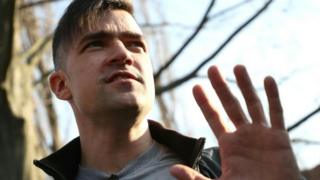 Austria’s chancellor has described as “disgusting” revelations that a far-right activist linked to the New Zealand mosque attacks suspect put a swastika on a synagogue when he was 17.

Chancellor Sebastian Kurz said he would not tolerate “neo-Nazi activities”.

Martin Sellner of the Identitarian Movement Austria said the incident had been long ago and he had since changed.

Last month investigators raided his home after he said he had been given money by the Christchurch suspect.

But Mr Sellner, 30, denied any involvement in the New Zealand attacks.

Fifty people died and dozens more wounded in the 15 March shootings. Australian Brenton Tarrant, a 28-year-old self-proclaimed white supremacist, has been charged over the attacks.

Mr Kurz – who campaigned on a harsh anti-immigrant message and is governing in coalition with the far-right Freedom Party – said that as chancellor it was his duty to “fight all forms of extremism to preserve free and liberal law-based state”.

It follows a report in Austria’s Kleine Zeitung that Mr Sellner had admitted to police in 2006 that he and a companion stuck a swastika poster on a synagogue in the town of Baden bei Wien, to the south-west of the capital Vienna.

The newspaper quoted Mr Sellner’s companion as saying the pair had decided to carry out the act after British Holocaust denier David Irving was arrested in Austria in 2005 and jailed. Denying the Holocaust is illegal in Austria.

Mr Sellner had also provided a badge saying “aryan youth” and an anti-Turkish poster, his companion said at the time.

Mr Sellner appeared regretful and was told to carry out 100 hours of community service in a Jewish cemetery, the newspaper report said.

Responding to the report on Twitter, Mr Sellner said it was no secret that he had been active in the neo-Nazi scene when he was younger but had “left that behind a long time ago”. He had never taken part in acts of violence, he added.

Mr Sellner has become one of the most prominent young activists of the far right in Europe.

Austrian media say the far-right Freedom Party has come under pressure to distance itself from the Identitarian Movement Austria (IBÖ) following the revelations that Brenton Tarrant donated about €1,500 (£1,290; $1,700) to the IBÖ.

In March last year Mr Sellner and his girlfriend Brittany Pettibone – an alt-right vlogger and conspiracy theorist – were refused entry to the UK.

The authorities said their presence in the UK would not have been “conducive to the public good”.