Andrew’s Law: Widow demands life for anyone who kills an emergency worker after PC’s death 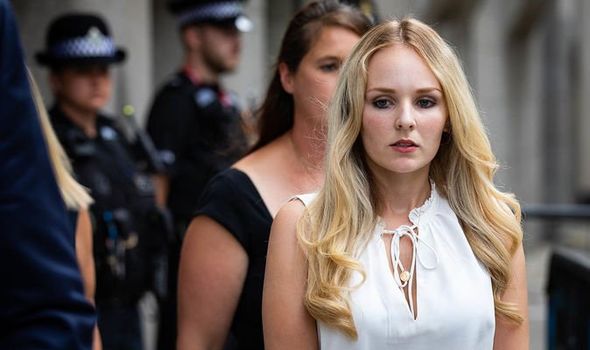 She proposes an “Andrew’s Law” which will stop bereaved family members from facing fresh heartache when judges impose “lenient and insufficient” sentences on killers. PC Harper’s mother, Debbie Adlam, is also calling for anyone who kills an officer to face a minimum term of 20 years behind bars. Mrs Harper said that criminals responsible for “wreaking utter despair and grief in all of our lives will spend an inadequate amount of time behind bars”. She declared: “I begin this journey for you, Andrew. For all of the blue family and the emergency workers who put themselves at risk on a daily basis.

“I pledge to my late husband to never stop until I have made the difference that this country clearly needs.

“I vow to stand strong and firm with so many other honourable people in our country to make the changes that we clearly know to be justified.

“I hope that by creating a new Andrew’s Law that sees any person who commits a crime that results in the death of an emergency worker being jailed for life, those that have to go through what I have been through get the justice that they rightly deserve.”

PC Harper, 28, died when he was dragged for more than a mile along a road by a getaway car in August 2019 as he tried to stop three thieves fleeing after they stole a quad bike.

Driver Henry Long was jailed for just 16 years, while his accomplices Albert Bowers and Jessie Cole were sentenced to only 13 years each for manslaughter.

Mrs Harper said her husband’s killers will be free to “commit more crimes and continue to put more people in danger when they are released in a very small number of years”.

Launching the campaign yesterday, she added: “I urge you all to see the dangers that our protectors face on every shift that they begin, the risks that they are forced to take in order to keep our people safe.

“Far too often one of our own is taken from us, far too common is it that one of our care givers is injured. No one should have to give their life for their job.

“I wish to ensure that anyone who finds themselves in my position, any widows of the future, will not have to experience the same miscarriages of justice.

Let us finally put in place laws we can actually be proud of, let us do something about the injustices of our systems that cause so much heartache and utter outrage from us all.”

Mrs Harper said she knows “so many of the general public” share her views on the sentences her husband’s killers received.

PC Harper’s Thames Valley Police Federation colleague Sgt Andy Fiddler, who has been helping Mrs Harper since his death in August last year, said: “We want a new Andrew’s Law that protects all our emergency services workers that are killed on duty as a result of someone committing a crime.

“Those in society who hurt those there to protect us should be dealt the full force of the law and judicial system.”

John Apter, the national chairman of the Police Federation, said: “We fully support Lissie and her campaign to seek a change in the law.

“Andrew was brutally killed, leaving his wife, loved ones, colleagues and the nation devastated.

“The killing of a police officer should see those responsible face the rest of their lives in prison.

“This campaign would be Andrew’s legacy and we will continue to support Lissie in her efforts to seek justice and change the law for the greater good.”

A Home Office source said last night: “We will look at the details of the proposals.”

Home Secretary Priti Patel told the Daily Express: “PC Andrew Harper was a hero who epitomised the bravery and sacrifice that make our police the best in the world.

“I have met Debbie and know the extent of the pain and anguish this terrible crime inflicted on her and the rest of PC Harper’s family, friends and colleagues.

“His life was cruelly cut short and his incredible bravery and extraordinary sacrifice will not be forgotten.

“The sentences of those convicted of killing PC Harper have been referred to the Attorney General for consideration under the Unduly Lenient Sentencing Scheme.”

A Ministry of Justice source said that the Justice Secretary will set out his proposals for sentencing reform later this year, adding: “No stone will be left unturned and we will look at everything from community orders up to sentences for serious violent crime.”

It could include increased sentences for assaults on emergency workers.

Mrs Harper is due to meet the Prime Minister Boris Johnson and Home Secretary within weeks. The maximum sentence a judge can impose for manslaughter is life imprisonment but they must specify a minimum term to be served.

Mrs Adlam is calling for a minimum term of 20 years for anyone who takes a policeman’s life, with no chance of parole during that time.

She said: “I don’t think there’s any sentence that will help us.”