Despite efforts by President Trump and congressional Republicans to hobble the Affordable Care Act, the health insurance marketplace it created is still standing.

Open enrollment started Thursday — in most places it runs through Dec. 15 — and people in at least a dozen states who want to buy or renew policies have more choices than they did last year.

After skyrocketing last year, premium prices in many places have stabilized, as insurers adjust overpriced policies and more competitors enter, or return, to the market.

But what you pay will still vary greatly based on your income, location and plan level. Premiums for a benchmark “silver” plan are expected to dip 1.5 percent on average after rising sharply for two years. The variation is so wide, though, that people in Tennessee could see double-digit declines while those in North Dakota may see steep increases.

That’s why simply renewing an existing policy could cost you plenty, and spending time comparison-shopping and digging into plan details will most likely yield more savings.

“The biggest trend this year is that there are major differences state by state and even county by county when it comes to plans and prices,” said Noah Lang, chief executive of Stride Health, an online broker that helps consumers pick and buy plans compliant with the law and available on HealthCare.gov and state health exchanges.

Those differences and a series of moves by the Trump administration have made what was already a complicated process even trickier to navigate. Here are some tips to help guide you.

Changes to the playing field

Monthly premium costs would have been even lower — 16 percent lower for the most popular federal plan, according to a Kaiser Family Foundation analysis — if the Trump administration and Congress had not made several policy changes.

Among the most notable changes was the elimination of the individual mandate penalty, a tax on those who did not carry insurance. With no penalty to sway them, some otherwise healthy people may forgo insurance, driving prices higher for everyone. (Massachusetts, New Jersey and Washington, D.C., adopted their own requirements for buying insurance for 2019.)

The Trump administration also stopped reimbursing insurers that reduced out-of-pocket costs for lower-income consumers; slashed financing for nonprofits that help people enroll in exchange plans; and encouraged an expansion of so-called short-term plans. Although cheaper, such plans often provide skimpy coverage and can deny it altogether based on pre-existing conditions (including pregnancy, as my colleague Robert Pear recently reported).

The plans available on HealthCare.gov and state exchanges come in four distinct metal levels — bronze, silver, gold and platinum — that vary in how costs are split with an insurer. The more precious the metal, the less you pay out of pocket for deductibles and the like.

But there are many exceptions: Benchmark silver plans — the second-lowest-priced silver plan — will be more expensive than gold plans in at least 1,195 counties, according to an analysis by David Anderson, a health policy research associate at Duke University. This will probably be more common in the Midwest and Southeast, he said, and in the Mountain States. 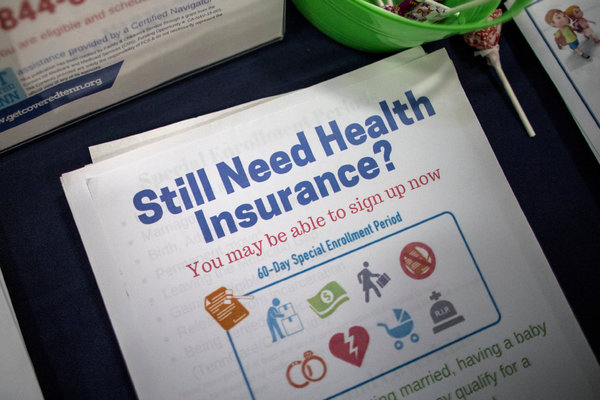 Consumers who earn 100 percent to 400 percent of the poverty level (up to $100,400 for a family of four) may be eligible for subsidies, in the form of tax credits, on premiums. Those who earn 100 to 250 percent of the poverty level who enroll in a silver plan may also qualify for reductions in out-of-pocket spending. That’s why lower-income consumers are almost always better off with silver plans.

People who still qualify for subsidies but earn a bit more have other factors to consider. Some may see their subsidies shrink a bit this year — that’s because prices on silver plans, which are used to calculate subsidies, have declined slightly. In some places, those subsidies may still be large enough to offset most of the monthly premium costs of, say, a bronze plan or to make a gold plan more reasonable.

If you’re not eligible for a subsidy, it could be worthwhile to consider plans that comply with the law but are offered off the exchange directly through an insurer or a broker. Given the inflated prices of certain silver plans, buying the same metal plan outside the exchange could save you roughly 10 percent on average, according to Cynthia Cox, a health insurance policy expert at the Kaiser Family Foundation.

A 40-year-old single person would pay about $480 a month on average for a full-price, benchmark silver plan on the state and federal exchanges, Ms. Cox said. Costs can jump quickly from there. “If you need to cover other family members,” Ms. Cox said, “it starts looking more like another mortgage payment.”

When analyzing plans, start with what you know. Are your doctors and preferred hospitals in the network? It can change year to year. (Few plans offer out-of-network coverage; when they do, it’s limited.) Which cost-sharing tiers do your prescriptions fall into, and how much of the costs are covered? How will the costs of treating continuing health conditions be split?

“It’s harder than shopping on Amazon and looking at a list of prices and finding the cheapest one,” said Chris Sloan, a director at Avalere Health, a health care research and consulting firm.

The examples here illustrate some options with premium costs for a family of four: two 30-year-old adults and two children.

When it comes to deductibles, size is not all that matters. Some plans may cover certain medical services with some sharing of costs, like a co-payment, before a deductible is met, said Katherine Hempstead, a policy expert at the Robert Wood Johnson Foundation. Silver plans are more likely than bronze, for example, to cover certain services before a deductible is met. Even after that, you are likely to be subject to some cost sharing until you reach the out-of-pocket maximum.

People who are less healthy or who have conditions that require costly treatment or medication should add up their premiums and estimate out-of-pocket costs to determine their potential total liability for the year.

These plans do not comply with the Affordable Care Act’s consumer protections and are not available on government-run health care exchanges.

But they will be more heavily marketed outside the exchanges this year because of the administration’s move, which means they can now be offered for longer periods — just under a year, up from about three months — and renewed for an additional two years.

But they come with big risks and little financial protection. (Some states, including California, have banned them.)

“One way to make insurance cheap is to not cover things — and some of them don’t cover drugs or things like physical therapy or they may have a cap on benefits,” said Mr. Sloan of Avalere Health. “They can deny you coverage if you have pre-existing conditions, but they are very cheap if you are healthy and young.”

Short-term plans are also likely to cause confusion. They may be available on sites with names that resemble those of government-run exchanges, warned Dania Palanker, an assistant research professor at the Center on Health Insurance Reforms at Georgetown’s Health Policy Institute. And the brokers selling short-term plans are often paid more for doing so, she said, or need to put less work into selling them than they would exchange-based plans, which require consumers to submit detailed information about income and other things.

Because the administration cut financing for nonprofits that help consumers enroll in exchange-based plans, there will be fewer places for consumers to turn for unbiased advice. It’s worth checking your state exchange’s website to see if any of these so-called navigators are in your area.

Other services can provide more hand-holding, experts said. Those include online brokers like HealthSherpa and Stride Health. Stride applies algorithms to your specific circumstances — demographic information, income, doctors, drugs and any conditions you are managing — and then makes recommendations based on what it thinks is the most responsible choice.

Both Stride and HealthSherpa sell only plans that comply with the health law, though Stride also recommends those available off the exchange. (Both receive commissions from insurers, but say the commissions do not affect recommendations.)

Whether you decide to seek outside help or compare what’s available on your own, taking time to shop around is likely to pay dividends, even if your first instinct is to simply renew an existing policy.

Tara Siegel Bernard covers personal finance. Before joining The Times in 2008, she was deputy managing editor at FiLife, a personal finance website, and an editor at CNBC. She also worked at Dow Jones and contributed regularly to The Wall Street Journal. @tarasbernard