Home » Australasia » Why would someone hide a needle in fruit?

Why would someone hide a needle in fruit? 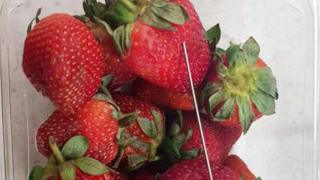 Australia is currently searching for a saboteur (or saboteurs) amid a national scare involving the hiding of sewing needles within strawberries.

In one case, a consumer who swallowed a needle had to be treated in hospital. Children and others have reported narrow escapes.

Since the first cases were reported last week, authorities have also stepped up warnings of copycat, prank and hoax incidents. There has even been a case in New Zealand.

What could compel such actions? The BBC asked criminologists and psychologists for their views.

A food crime of this kind is rare in Australia and even its concept feels very unfamiliar, experts say.

“I think that’s why there is such a sense of public outrage over this,” says forensic psychologist Anita McGregor, from the University of New South Wales.

“You pick up a punnet of strawberries – something so benign and anticipated to be safe – and this is a step outside that.”

Police have not speculated publicly about how the scare began, saying they are working through complex industry supply chains.

Who could be the target?

Criminologists say different motives are possible. Perpetrators may not even intend to hurt the public, according to Prof Murray Lee from the University of Sydney.

“You want to think about how someone’s justifying these actions to themselves,” he says. “Perhaps they’ve been upset by a particular grower or business and wanted to take some kind of revenge.”

But it could also be a deliberate act of malice towards the public that is intended to spread fear, he says.

“You could equate [that possibility] with forms of terror that use cars and planes as weapons – it’s obviously not the same thing – but it’s sort of a small-scale version of that,” he says.

Ms McGregor said it could be an act of “madness or badness”, or both.

“They could just be acting out against something in their personal lives, or acting on some delusion where they feel compelled to do something, but not out of a sense of criminality,” she says.

Regardless of the motivations, criminologists say acts of sabotage are done with intent.

“What we’re seeing here is not an accident,” said criminologist Dr Danielle Harris from Griffith University.

“We can try and understand why people break into houses or commit assault, but this here is not an act of passion. Whether it’s the original crime or copycat offences, hoaxes and false alarms, these are acts of free will.”

Prof Lee agrees, and says the “novelty” of the act – targeting something that is ordinarily mundane – would appeal to copycat offenders.

“With each case reported, it’s generating its own excitement,” he says. “So you can imagine someone slightly unhinged also wanting to join in on the notoriety and create their own news.”

The government has introduced stricter penalties for contaminating food as part of its response to the scare.

“People do things anonymously they wouldn’t otherwise do, especially in this circumstance where there is a significant disconnection between the behaviour and the harm,” she says.

“It’s not an act of sadism. It’s not someone who wants to see the pain of another person biting into the strawberry. There is a disconnect here.”

Reporting by the BBC’s Frances Mao