India’s Modi Faces Chance of Another Electoral Setback, This Time in Bihar

NEW DELHI — India’s governing party and its allies face a tough fight in the state of Bihar, where the first major election to take place in the country since the coronavirus struck has become a referendum on the government’s performance.

The Bharatiya Janata Party and its coalition partners were behind as of Tuesday, exit polls showed, in a vote to elect Bihar’s 243-member legislative assembly. Election results were expected by noon local time on Tuesday.

Prime Minister Narendra Modi, the leader of the B.J.P., remains popular nationally. But a loss would be the 10th for his party in the last 12 major state elections, potentially creating a roadblock down the line for his government’s aggressive Hindu nationalist agenda.

In Bihar, a poor state where most people eke out a living in agriculture, forestry and fishing, Mr. Modi’s party had formed a coalition with the incumbent chief minister, Nitish Kumar of the Janata Dal, or People’s Party. 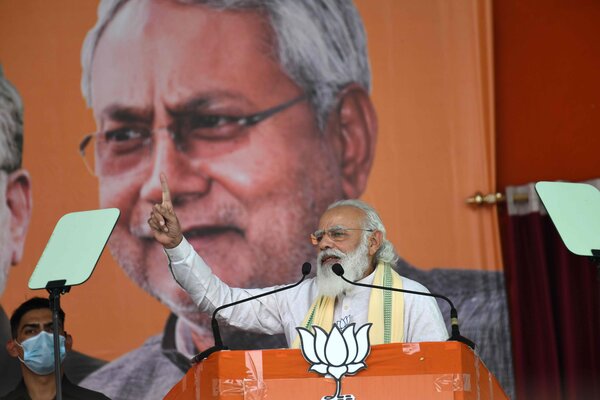 The coalition made hay out of national B.J.P. achievements, such as a recent Supreme Court decision that gives Hindus the right to build a temple on the site of a mosque that was destroyed by Hindu rioters decades ago. Mr. Modi set the ceremonial cornerstone for the temple, at Ayodhya, in August.

Mr. Kumar’s challenger, 31-year-old Tejashwi Prasad Yadav of the Rashtriya Janata Dal, or National People’s Party, focused on an issue of particular importance to Biharis: the lack of jobs for young people. The youth unemployment rate in 2018 and 2019 in Bihar was nearly 31 percent, compared to 17 percent nationwide.

The B.J.P.-led coalition had a difficult time countering Mr. Yadav’s appeal, despite Mr. Modi himself campaigning in the state four times. The prime minister has cast Mr. Yadav as “jungle raj ke yuvraj,” or the prince of an era of lawlessness, in a reference to his parents’ rule of Bihar.

Mr. Yadav’s father, Lalu Prasad, who served one and a half terms, beginning in 1990, has been in and out of prison for years on corruption charges. He is currently incarcerated at a hospital in Ranchi, a city in neighboring Jharkhand state. While under investigation for embezzling public funds in 1997, he appointed his wife, Rabri Devi, as chief minister. She remained in power until 2005.

The election stands as a barometer of public views on the state government’s handling of the pandemic, Mr. Verniers said. Experts have estimated that the economic collapse caused by the pandemic and a lockdown earlier this year, which led to the return of millions of migrants, could have sent youth unemployment above 40 percent in the state.

“There is a widespread perception that the Bihar government’s effort to mitigate the impact of the pandemic on precarious workers has been less than adequate,” he said.

Bihar, where health care is limited, has particularly suffered in the pandemic as the lockdown ordered by Mr. Modi in March sent migrant workers back to their ancestral villages in droves.

Many of those who had migrated to big Indian cities were forced to return home, often on foot, since public transportation was suspended. Others who had planned to set out for seasonal work also missed out on the opportunity to earn income, said Varun Aggarwal, founder of the Mumbai-based advocacy group India Migration Now.

“There is a longer-term silent disaster for people who couldn’t migrate” in Bihar, Mr. Aggarwal said.

India’s new virus infections have dropped dramatically in recent weeks from September highs of nearly 98,000 new cases a day. But experts warn that cold weather, toxic air pollution caused by the burning of paddy fields to clear them of stubble, and the Hindu festival of Diwali this month could fan a resurgence in cases.