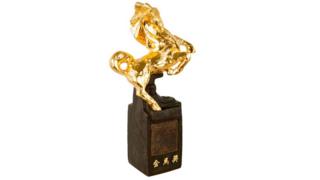 The Oscar statuette is Hollywood’s biggest trophy. In the world of Chinese cinema, its equivalent is a galloping Golden Horse.

With increasing investment in Chinese cinema it’s likely that in just a few years time, some of those walking the red carpet on Saturday will become household names around the world.

Big names from the Chinese-speaking world made their screen debut at the Golden Horse Awards.

But ever since films from mainland China became eligible for entry in 1996, the Golden Horse Awards has reflected the growing might of China’s film industry.

This year, most nominees for the major award categories hail from China.

This is your guide to the big ticket award show from one of the world’s most dynamic film industries.

It’s worth starting with the big names first.

The 68-year-old screen legend is perhaps the best-known mainland Chinese director outside of China.

Even though he’s been Oscar-nominated for films such as Raise the Red Lantern, he’s never won a Golden Horse award. But that could change this year.

Mr Zhang’s movie Shadow is in the running for Best Feature Film. He’s also been nominated for Best Director.

But one of the things that makes the Golden Horse Awards so interesting is that it favours dark horses as much as its golden ones. And wins could go to someone lesser known.

He’s known as the bad boy of mainland Chinese cinema.

Director Lou Ye’s, whose films include Suzhou River and Weekend Lover, has had his run in with Beijing censors for his creative decisions in covering controversial themes such as sexuality and gender.

It’s no surprise that his latest offering The Shadow Play happens to touch on the very sensitive Chinese C word: “corruption.”

It’s rare to shortlist a movie set in Tibet at any film festival, even at the Golden Horse Awards.

What’s even more unusual is having a Tibetan director in the running for best director.

Pema Tseden will be competing against better known directors like Zhang Yimou for the acclaimed prize.

His film Jinpa tells of a truck driver who picks up a hitchhiker on an isolated road in the barren plains of Tibet. He later learns of the young man’s intentions: to kill the man who murdered his father.

Somehow the films manage to reflect the political temperature of the Chinese-speaking world.

In Lou Ye’s The Shadow Play, a local government official in charge of approving “urban renewal” projects and an ambitious land developer collude to make their fortunes.

He later falls from a rooftop during a riot against demolition and a young police officer investigating the mysterious death uncovers a complex web of extramarital affairs, betrayal and murder; and later becomes entangled himself.

It’s a story that could only have come about after years of headlines of Chinese President Xi Jinping’s crackdown on corruption, Chinese officials taking their own life not to mention the recent disappearance of Interpol chief Meng Hongwei.

Many foreigners may not know about the pace of China’s economic reform, but this is inevitably the subject of hushed dinner table conversations in China.

One cannot help but think Zhang Yimou’s Shadow, the story of a powerful king and his people displaced from their homeland and longing to win it back, feels like an allegory.

The cinematography is breathtaking but also two of the biggest celebrities in China currently – husband and wife Deng Chao and Sun Li – play the leading characters.

And an entry from Taiwan shows it living up to its reputation as the most open place in Asia on homosexuality.

Nominated for Best Feature Film Dear Ex, played by Best Actress nominee Hsieh Ying-xuan, is about a woman who discovers her late gay husband had named his male partner as the beneficiary of his insurance policy.

She takes her son to confront him and demand the money. But her son ends up staying on to learn more about his late father.

The Golden Horse Awards isn’t one to shy away from sensitive issues. Big political events have influenced some of this year’s nominated films.

Best Documentary nominees include Our Youth in Taiwan (about the country’s Sunflower Movement) and Umbrella Diaries: The First Umbrella (charting the birth of the Occupy protests through Hong Kong activists).

At the age of 29, Chinese novelist (turned director) Hu Bo took his life.

His first full-length feature film An Elephant Sitting Still landed him a coveted nomination for the Best Director award.

In the northern Chinese city of Manzhouli, there is said to be an elephant that simply sits and ignores the world.

The place becomes an obsession for the film’s four protagonists, who run away from their troubles and set their hopes on finding it.

It reflects the characters’ and perhaps the director Hu Bo’s sense of alienation from society. Following his death, his masterpiece was finished off by a production team.

A prostitute with a superhuman libido, plies her trade while living on a boat in Hong Kong.

Three Husbands follows the story of a woman named Baby Girl. With three husbands, she doggedly devotes herself to her work – not exactly in keeping with traditional Chinese values.

Chloe Maayan’s bold performance has landed her a Golden Horse nomation for Best Leading Actress. The film is the third in a “prostitute trilogy” from director Fruit Chan in which he uses sex to satirise modern day Hong Kong.

She’s already won the Taipei Film Festival Best Actress Award. If she takes home the Best Leading Actress in the Golden Horse Awards, that would be the biggest prize in the Chinese starlet’s acting career.

Like the Academy Awards, the Golden Horse ceremony will keep viewers glued to their screens late into the night.

And keep audiences talking about it the very next day.

Morning Briefing: Top stories from The Straits Times on Oct 27

Ex-Malaysian PM Najib says he suggested working with Anwar, but not DAP