SEOUL — In his last year in office, President Moon Jae-in of South Korea has seen his approval ratings in a tailspin. His trademark North Korea diplomacy remains in tatters. Citizens are fuming over his ​repeatedly ​botched attempts to arrest soaring housing prices.

And on Wednesday, voters in South Korea’s two biggest cities dealt another crushing blow to the beleaguered leader.

Mr. Moon’s Democratic Party lost the mayoral elections in Seoul and Busan to the conservative opposition, the People Power Party. Critics are calling the results of the two by-elections a referendum on Mr. Moon and his government.

“The people vented their anger at the Moon government through these elections,” said Kim Chong-in, head of the People Power Party, referring to large margins by which its candidates won.​

South Korea’s Constitution limits Mr. Moon to a single five-year term. But he had hoped that a candidate backed by his party would succeed him in the presidential election next March and continue his progressive legacy, including a policy of engagement toward North Korea.

Wednesday’s mayoral elections showed that the Democratic Party faces steep challenges as voters once loyal to Mr. Moon — especially those in their 20s and 30s — abandon it in droves.

Oh Se-hoon, the People Power Party candidate, won the race in Seoul, the capital city ​of 10 million people. He routed Park Young-sun, the Democratic Party candidate and a former member of Mr. Moon’s cabinet, by more than 18 percentage points, according to voting results announced by the National Election Commission.

In Busan, on the southeastern tip of the ​Korean Peninsula, Park Heong-joon, another candidate affiliated with the opposition party, ​​beat his Democratic Party rival by another large margin, according to the commission. 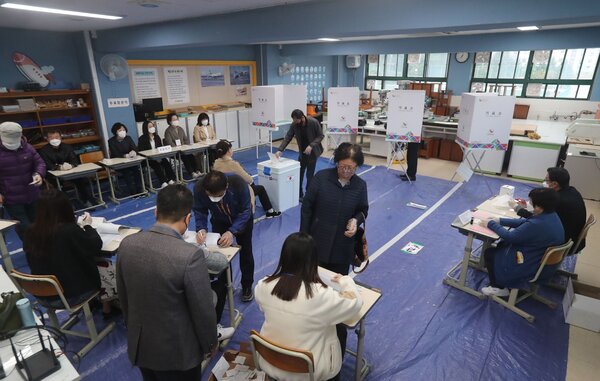 The former mayors were both members of ​Mr. Moon’s Democratic Party and the president’s close allies. Their downfall ​weakened the moral standing of Mr. Moon’s progressive camp, which ​has cast itself as a ​clean, ​transparent​ and equality-minded alternative to ​its conservative opponents. Mr. Moon’s two immediate predecessors — Park Geun-hye and Lee Myung-bak — were both conservatives and are now in prison following convictions on corruption charges.

Mr. Moon was elected ​in 2017, ​filling the power vacuum created by Ms. Park’s impeachment. As a former human rights lawyer, he enthralled the nation by promising a “fair and just” society. He ​vehemently criticized an entrenched ​culture of privilege and corruption ​that he said had taken root while conservatives were in power, ​and vowed to create a level playing field for young voters who have grown weary of dwindling job opportunities and an ever-expanding income gap.

Mr. Moon spent much of his first two years in power struggling to quell escalating tension between North Korea and the United States, successfully mediating diplomacy between the two countries. He shifted more of his attention to domestic issues after the two summit meetings between North Korea’s leader, Kim Jong-un, and President Donald J. Trump failed to produce a deal on nuclear disarmament or the easing of tensions on the Korean Peninsula.

But things quickly turned sour on the home front ​as well.

In 2019, huge outdoor rallies erupted ​over accusations of forgery and preferential treatment in college and internship applications​ surrounding the daughter of Cho Kuk, Mr. Moon’s former justice minister and one of his closest allies.

The scandal flew in the face of Mr. Moon’s election promise of creating “a world without privilege,” and prompted outrage against the “gold-spoon” children of the elite, who ​glided into top-flight universities and cushy jobs while their “dirt-spoon” peers struggled to make ends meet in South Korea’s hobbled economy.

​South Koreans expressed their growing cynicism over what they considered the hypocritical practices of Mr. Moon’s progressive allies with a popular saying: naeronambul. It roughly translates to, “If they do it, it’s a romance; if others do it, they call it an extramarital affair.”​

Nonetheless, the Democratic Party won by a landslide in parliamentary elections last year as Mr. Moon leveraged his surging popularity around South Korea’s largely successful battle against the coronavirus. But Mr. Moon’s virus campaign has lost its luster.

Mr. Moon’s most devastating setback came last month when officials at the Korea Land and Housing Corporation — the state developer — were accused of using privileged insider information to cash in on government housing development programs. Kim Sang-jo, Mr. Moon’s chief economic policy adviser, stepped down last month when it was revealed that his family had significantly raised the rent on an apartment in Seoul just days before the government imposed a cap on rent increases.

“People had hoped that even if they were incompetent, the Moon government would at least be ethically superior to their conservative rivals,” said Ahn Byong-jin, a political scientist at Kyung Hee University in Seoul. “What we see in the election results is the people’s long-accumulated discontent over the ‘naeronambul’ behavior of the Moon government exploding. Moon has now become a lame duck president.”

Mr. Oh resigned as Seoul mayor in 2011 after his campaign to end free lunches for all schoolchildren failed to win enough support.

Pre-election surveys this month showed that voters who planned to vote for Mr. Oh would do so not because they considered him morally superior to his Democratic Party rival. Instead, it was because they wanted to “pass judgment on the Moon Jae-in government.”