TOKYO — The Australian softball players who arrived in Japan this week for the last stage of their training before the Tokyo Olympics have spent most of their lives trying to reach the world’s pre-eminent sporting event.

Now they will experience much of their Olympic moment confined to small hotel rooms.

The Australian women are the first team to touch down in the host country before the Games, which open in seven weeks. Their constricted arrival offers a preview of an Olympics like no other, held as much of the globe remains in the clutches of a deadly pandemic.

There are daily PCR tests. The players are confined to three floors of their hotel in Ota City, about two and a half hours from Tokyo in Gunma Prefecture, and use one elevator separated from other guests. They eat in their own dining room. Only six people are allowed in the gym at a time, so the 23 athletes have a rotating schedule. They are not allowed to visit local bars, restaurants or shrines, but they can gather in a hotel meeting room outfitted with a Nintendo Switch.

As the Olympic organizers struggle to persuade a skeptical public that the Games won’t become a superspreader event, the Australian softball players are a test case for an elaborate system of safety protocols intended to protect both the athletes and the Japanese public. 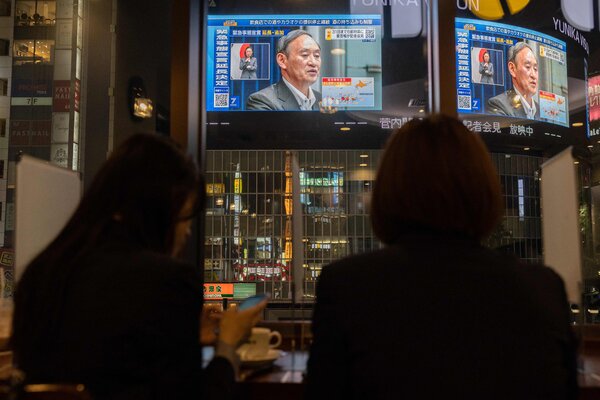 Even as the first of thousands of athletes arrive, nine prefectures in Japan are under a state of emergency in which restaurants and bars are asked to restrict hours and suspend alcohol service. Although deaths in Japan have remained lower than in other hard-hit countries, nearly three times as many people died from the coronavirus in the first five months of this year than did in all of 2020. The chief medical adviser to the government, Shigeru Omi, told a parliamentary committee this week that it was “not normal” to hold the Games under pandemic conditions. And about 10,000 Olympic volunteers have quit.

In Ota, where the Australian players are training at a local field — the only place they are allowed to go outside the hotel — many residents said they had learned that the athletes were coming only after seeing television news reports about their arrival at Narita Airport near Tokyo.

“I didn’t even know that Ota City was hosting the team until then,” said Takao Sekine, 68, owner of La Terrasse Creole, a Western-style restaurant that has had fewer customers in the last year than at any point in its 30-year history. If it wasn’t for the coronavirus, he said, “the Olympics and the Australian players coming here would have been great for business.”

Now, he said, he was concerned about a potential public health risk. Comparing the pandemic to World War II, he said: “If American planes came flying over us, we could run away. But we can’t run away from a virus you can’t see. So people are very scared.” As a result, he said, “my honest feeling when thinking about the world is that the Olympics should stop.”

Olympic organizers and Japanese government officials say they are confident that the Games can be held safely. Thomas Bach, president of the International Olympic Committee, has said that at least 80 percent of athletes will be vaccinated by the time they arrive in Tokyo, and the president of the Japanese Olympic Committee told reporters this week that 95 percent of Japan’s athletes would be vaccinated. (Among the general public, just 3 percent of Japanese have been fully inoculated.)

Even without vaccinations, Japan has managed to keep infections from spiraling out of control. Schools have remained open and many people continue to use public transit, shop and attend sports and other cultural events. Masks are ubiquitous.

“We have been able to keep movie theaters open and still reduce infection cases,” said Makoto Shimoaraiso, an official in the government’s Cabinet Secretariat. “So we can definitely hold the Olympics while keeping infections under control.”

Despite the assurances, close to a quarter of the 528 communities that had initially signed up to host Olympic teams from abroad will no longer do so. Some towns have withdrawn their invitations. But in many cases — about 100 — international teams have decided not to come to Japan in advance of the Games because of coronavirus concerns, said Yasuhiro Omori, an official with the Cabinet Secretariat division that is overseeing the host town initiative.

Some of the towns are disappointed about the canceled visits.

Kamo, a city of about 25,000 residents in Niigata Prefecture in western Japan, had spent about 70 million yen — or close to $635,000 — building gymnastics training facilities for their scheduled guests from Russia. Hirokazu Suzuki, a sports promotion official in the town, said the gymnasts had canceled their plans to train there. “We were shocked,” Mr. Suzuki said, “but we also understood that there are people abroad who are scared.”

In Higashimatsuyama, a city of more than 90,000 people in the Tokyo suburbs, Yukio Ohtani, a city official, said it had agreed to host a delegation from Cuba. The city started serving Latin American foods like picadillo, ajiaco and flan during lunch in local public elementary and middle schools.

But the city withdrew its offer because officials at the local university where the Olympians were scheduled to stay and train said they felt uncomfortable allowing the athletes on campus when students were still restricted to attending classes online. “We had prepared so much,” Mr. Ohtani said. “But due to the coronavirus, it’s understandable.”

For cities that do host athletes, the Japanese government has budgeted just over $115 million for extra protections against infection, said Mr. Omori of the Cabinet Secretariat. He said the host towns had agreed to test athletes for the virus daily, assign them to segregated floors of hotels, charter buses to ferry them to training facilities, and install plastic dividers between tables in dining halls.

Mr. Omori said the visiting teams must sign a form in which they promise not to make contact with the general public. With Japan currently barring most international travelers, Mr. Omori said, the athletes “are being given a very special exception on the understanding that they follow the rules.”

In Ota, a city of 250,000 people, the Australian softball players and five staff members — all of whom are vaccinated — are finishing a four-day quarantine confined to their hotel. But the players said they had not noticed any surveillance of their movements. Other than guards outside the hotel, there does not appear to be any police presence to keep them locked down.

Chelsea Forkin, 31, a member of the national team since 2008, said the athletes were playing a lot of Mario Kart on the Nintendo console and eating mostly Western fare like eggs and bacon for breakfast and steak and pasta for dinner. Given polls that show the Japanese population largely opposes holding the Olympics, she said the team wanted to set a strong example and obey all safety protocols.

“We can’t go outside and go for a walk, but that’s OK,” Ms. Forkin said. “We understand the rules and want to be respectful.”

David Pryles, the chief executive of Softball Australia, said the team entourage included a well-being counselor to assist with mental health, along with a team doctor — resources it would not necessarily include for international competitions before the pandemic.

He said the restrictions on movement, which will continue into the Olympic Village — where food halls will have staggered schedules and drinking and partying will be discouraged — would be an enormous disappointment for many athletes.

Ms. Moore, the Australian second baseman, said the team’s arrival in Japan was strikingly muted. There was no welcome party, and there will be no interaction with family or fans. The team plans to train, play, then leave.

Even the staff members at their hotel, she said, seem to be struggling with a mix of disappointment and resolve, as if they keep saying to themselves: Stay focused, stay safe, make the most of an imperfect event.

“They keep telling us to find our happiness,” she said, “which we’re taking on board.”

Dickson Yeo had approached various people in Singapore, applied for government jobs to get info: ISD