Home » Asia » A short guide to Indonesia’s battle for votes

A short guide to Indonesia’s battle for votes 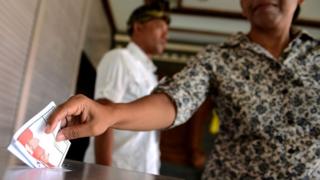 Some 192 million people in Indonesia will be eligible to cast their votes on 17 April, in what has been called one of the most complicated single-day elections in history.

The election will see two familiar faces square up: the incumbent Joko Widodo, known as Jokowi, and his long-time rival Prabowo Subianto.

What’s going to happen on 17 April?

Indonesia’s presidential, parliamentary and regional elections will all be taking place simultaneously.

Some 245,000 candidates will be running for more than 20,000 national and local legislative seats across Indonesia.

India – with a population of five times as many people – votes in rolling elections that take place over two months.

Indonesian voters will have one day, making it “one of the most complicated single-day elections in global history,” according to the Lowy Institute.

Who is running for the presidency?

It’s a battle between current President Joko Widodo, and Prabowo Subianto, a former military general. They’ve come face-to-face before in the 2014 elections.

Mr Subianto is closely associated with the traditional elite. He was previously married to the daughter of former dictator General Suharto, who ruled Indonesia with an iron fist.

Mr Subianto has been dogged by allegations of human rights abuses committed under Gen Suharto, though he has maintained his innocence.

After spending many years overseas, Mr Subianto made his political comeback in 2009.

He campaigned on a pro-poor platform in the 2014 presidential election, saying he wanted to reduce unemployment and create new jobs on farms.

Mr Widodo comes from humble beginnings, and first came to international prominence as the governor of Jakarta, winning the position in 2012.

In the 2014 presidential election he campaigned on a platform of “mind-set revolution” – a strategy to build national character, stamping out corruption, nepotism and intolerance, all of which he says flourished under Gen Suharto’s regime.

He went on to win, but five years on has disappointed some supporters by abandoning campaign promises to resolve human rights violations, according to one analyst.

Who are the key voters?

It’s all about the millennials.

According to the General Elections Commission of Indonesia, around 40% of eligible voters will be aged 17 to 35 – that’s around 80 million people.

And it’s clear parties have been trying their best to attract the youth vote – sometimes in innovative ways.

Mr Prabowo has been building up relationships with vloggers, YouTubers and influencers, according to a report by the Institute of Southeast Asian Studies.

Supporters of both candidates have also created their own music videos, complete with catchy tunes.

Social media is king in Indonesia, and can make or break a candidate.

Research by the University of Melbourne found Indonesia has the fourth-highest number of Facebook users in the world, with WhatsApp and Instagram not too far behind.

Earlier this year, three Indonesian housewives were arrested over an online video that claimed President Widodo would ban prayer and make gay marriage legal if he was re-elected.

Mafindo, an Indonesian organisation fighting fake news, said political fake news and disinformation shot up by 61% between December 2018 and January 2019.

The group’s co-founder told Reuters that a large proportion of the misinformation targets Mr Widodo, making him out to be a Christian, of Chinese ancestry, or a communist.

These may not sound like dramatic claims – but they’re big accusations in Muslim-majority Indonesia, where race and ideology are especially sensitive issues.