We’re covering a surge in coronavirus cases worldwide, a display of new weaponry by North Korea and President Trump’s plans to resume campaigning. 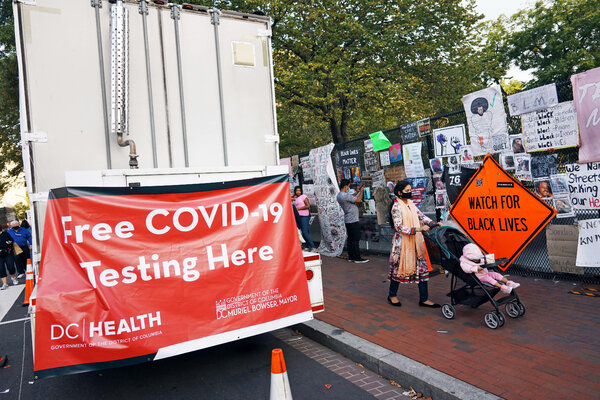 More than one million new cases were reported around the world in the past three days, as France, Russia, Nepal and several American states set records for the highest daily number of new infections. India surpassed seven million total cases.

The number of new cases is growing faster than ever, according to a Times database.

Globally, the U.S. leads with the highest number of infections since late May. But India is on course to overtake the U.S. On Sunday, India reported 74,383 new infections, taking its total past seven million. The U.S. has more than 7.7 million cases.

Here are our latest updates and maps of the pandemic.

In other virus developments:

Cases in Nepal are sharply increasing, overwhelming hospitals. Frontline doctors have also been infected, raising fears that health institutions’ staffing will be hollowed out.

South Korea said on Sunday that it was easing social-distancing restrictions, lifting a ban on gatherings of more than 50 people indoors and more than 100 outdoors.

The Israeli military began treating civilian coronavirus patients for the first time on Sunday, deploying to an overstrained hospital in the port city of Haifa and opening two Covid-19 wards in an underground campus.

North Korea rolled out what appeared to be its largest-ever intercontinental ballistic missile during a military parade in Pyongyang on Saturday.

The display was most likely an attempt to show that the country is making advances in military technology, but it was not immediately clear if the new missiles were real or mock-ups.

Analysis: By showing off but not launching a new ICBM that could potentially deliver a nuclear warhead to the U.S., analysts said, Kim Jong-un, the North’s leader, appeared to want to avoid provoking President Trump ahead of the Nov. 3 election.

Scene: The parade, which unlike earlier celebrations was held at night, was meant to lift morale after a difficult year that included devastating floods. It was held on the 75th anniversary of North Korea’s ruling Workers’ Party and featured fireworks, military planes firing flares in the night sky and goose-stepping soldiers who swore to “defend Kim Jong-un with our lives.” The highlight was the array of artillery pieces, tanks, rockets and missiles.

Government critics say Pakistan’s decision to ban the Chinese-owned social media app stemmed as much from politics as from concerns about content.

Opinion | Republicans, Not Biden, Are About to Raise Your Taxes