Opinion | Trump’s Shutdown Is Not About Border Security

For a sense of the true cost of his government shutdown, now deep into its second week, President Trump should spend less time rage-tweeting about Democrats’ refusal to throw money away on his wasteful border wall and more time perusing the #shutdownstories making the rounds.

With even a quick peek beyond his bubble, the president could learn much about the legions of government employees and contractors who spent the holiday season agonizing over how to cover their next mortgage payment or electric bill or trip to the grocery store if this political charade drags on much longer.

Let’s be clear: This fight is not about security. Contrary to Mr. Trump’s claims, there is no flood of savage foreigners pouring across the border. Even so, reasonable Democrats and Republicans acknowledge a need for some mix of more staff, better technology and, yes, fencing — as well as humane and sensible immigration and asylum policies. Achieving all of that has proved a tall order even for competent administrations. But it’s why Congress, on a bipartisan basis, has already been allocating more money for border security — money this administration hasn’t even managed to spend so far.

To avoid the complex, hard work that has traditionally gone with his job, Mr. Trump has instead manufactured a political impasse over a symbol, a wall, that even his new acting chief of staff, Mick Mulvaney, back when he was a congressman, derided as “an easy thing to sell politically” that “doesn’t really solve the problem.” John Kelly, Mr. Trump’s outgoing chief of staff, told The Los Angeles Times that the administration long ago abandoned the idea of a concrete wall as irrelevant to the real needs of border security — drawing a heated contradiction from the president on Twitter.

If Mr. Trump would take the time to check in with what’s happening in the real world, he might read about the divorced Army veteran who’d worked “three jobs to survive” before getting hired as a paralegal at the Federal Trade Commission — and who now has no idea if he’ll make the rent. He could hear from the single mother who says that she’ll have enough for rent — but not for food. He might be moved by the wife of a corrections officer wondering how her family will handle their “mortgage, day care and car payments” while her husband is working without pay. Or by the disabled military vet who, having waited more than a year for “service-connected surgery,” cannot get final approval for her procedure until the shutdown ends.

An estimated 800,000 federal workers have had their lives upended by this latest presidential temper tantrum. Some 420,000 of those, deemed “essential personnel,” are working without pay. This includes upward of 41,000 law enforcement officials, 54,000 border patrol agents and 53,000 Transportation Security Administration workers. (If you flew this holiday season, it was only thanks to these unpaid women and men.) Another 380,000 workers have been furloughed, including 28,800 employees of the Forest Service, 16,000 in the Park Service and 16,700 at NASA.

The longer the stoppage continues, the more people will feel the squeeze. Already, the Small Business Administration has been shuttered, delaying the processing of loans. A growing number of national parks, museums and historic sites will need to close, disrupting tourism for the sites and for surrounding businesses. At some of the parks kept open during the holidays even as many rangers and other support staff were furloughed, there were reports of trash piling up, toilets overflowing with human waste and episodes of vandalism. Routine screenings by the Food and Drug Administration are being put on hold, and the Federal Communications Commission is set to halt most of its operations on Thursday. The situation on Indian lands is about to get dire. The list goes on and on.

For the workers directly affected, among those facing the greatest economic uncertainty are contractors, who make up more than 40 percent of the government work force. This includes not only white-collar positions but also thousands of blue-collar jobs, such as janitors and security guards. Unlike regular government employees, many contractors may not be compensated for lost time. They could simply lose the income.

Even for regular, non-contract employees, who have eventually been granted back pay after past shutdowns and can reasonably expect the same this time, the grinding anxiety and financial costs of scraping by in the meantime mount with each passing day. Many of these workers live paycheck to paycheck, with little wiggle room. Some of their creditors are more understanding than others, and even one missed payment can carry heavy consequences.

On Dec. 27, the Office of Personnel Management, or O.P.M., tweeted a link to “sample letters” that workers could use in negotiating payment plans with creditors. This is not a new practice; similar templates were sent during the 2015 shutdown. The letters nonetheless earned much mockery on social media — especially the section suggesting that workers ask their landlords about trading “services to perform maintenance (e.g. painting, carpentry work) in exchange for partial rent payments.” After suffering a Twitter beat-down, O.P.M. removed the offending passage and issued a statement that it was part of a “legacy document” from 2013 that had been posted in error.

No matter: On the same day that federal workers were being urged to try their hands at a barter economy, Mr. Trump was busy firing off a series of rabid, finger-pointing, wall-related tweets, including one about how a wall deal had been thwarted not only by “Democrat obstruction” but also by uppity federal judges.

In one characteristically empathetic post, Mr. Trump sneered that “most of the people not getting paid are Democrats.” While this divisive, evidence-free claim tells you everything you need to know about this president’s hyperpolitical approach to his role, it most likely failed to impress the hundreds of thousands of families across the political spectrum who are suffering as a direct result of Mr. Trump’s grandstanding.

For pure lack of class, however, nothing topped the president’s tweets of Dec. 29, blaming Democrats’ opposition to his wall for the tragic death of two migrant children who had been apprehended by Border Patrol and put into administration custody.

As if all this weren’t bad enough, on Friday, Mr. Trump issued an executive order freezing pay for the government’s civilian work force in 2019 — around two million people. The order can, and is expected to be, overridden by Congress once the budget impasse is resolved. So, practically speaking, Mr. Trump’s move does little more than further fuel tensions.

Mr. Trump has claimed — without evidence, naturally — that “many” federal workers have urged him to “stay out until you get the funding for the wall.” This seems unlikely considering that a recent poll by Reuters/Ipsos found that only a quarter of all Americans support the shutdown. Only 35 percent said they favored including money for the wall in a spending bill.

This is, to put it mildly, not a broadly popular policy point on which the president is holding the nation hostage.

Not that Mr. Trump seems much interested in either the public will or the public good. For him, this shutdown is a self-declared point of pride — a gaudy display of his boldness, his manliness and his political steadfastness.

After all his bluff and bluster, if the president backed down now, he would incur the wrath and ridicule of hard-right pundits like Rush Limbaugh and Ann Coulter, who seem to call the shots in this White House, as well as die-hard supporters who still think a concrete wall — or at least some “artistically designed steel slats” — will Make America Great Again.

But there is likely to be a limit to how much Mr. Trump can make Americans suffer for an empty political gesture. The realities of a divided government may provide him with an opportunity — or an excuse — for a fresh start. The new Democratic House is set to vote Thursday on a spending plan to end the shutdown without more wall money, leading to the kind of intense negotiations that he has not faced in two years of single-party control of Congress.

If there’s a minimum of grandstanding on everyone’s part, Mr. Trump might get a lesson in how to make a deal. 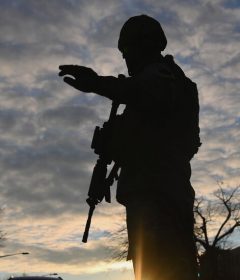 Opinion | The Military’s Extremism Problem Is Our Problem

Opinion | The Military’s Extremism Problem Is Our Problem 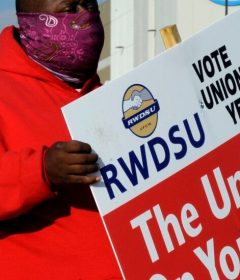