Home » Americas » Will Florida, the Recount State, Be Ready for the Election?

Elections supervisors say the hard-earned lessons of the 2000 presidential recount and other messes have taught them well. But the challenges are already apparent. 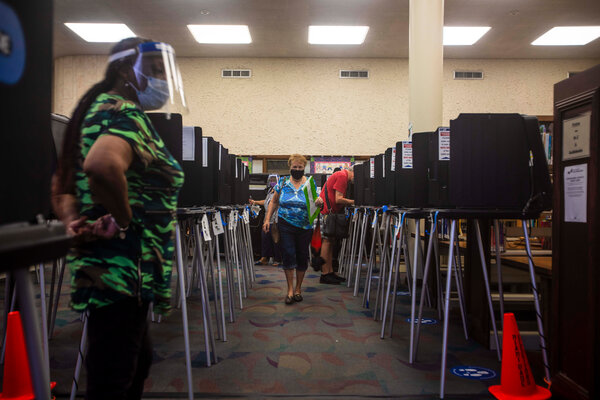 By Patricia Mazzei and Frances Robles

MIAMI — Most states have the occasional problems running their elections. Not Florida. Florida has debacles.

And, of course, the granddaddy of all election fiascos: Bush v. Gore in 2000.

More than two decades of scandals and blunders have made Florida the nation’s elections punchline, the state that kept the world at the edge of its seat while votes for president were manually recounted. The shadows of Florida elections past seem to lurk everywhere.

“I feel like I’ve seen this movie before,” Judge Mark E. Walker of the Federal District Court in Tallahassee said in a ruling this month after the state’s voter registration website crashed under the weight of thousands of last-minute applications.

Now the state, like the rest of the nation, faces perhaps the most daunting test yet: a 2020 election conducted in the midst of a pandemic, amid unsubstantiated fraud claims spread by the president and others. Reasonable predictions suggest that the legal wrangling over the results could stretch far beyond election night.

Elections officials say yes. With the snafus of years past, they say, have come lessons that prepared the state to process a crush of mail ballots and juggle the logistics of the coronavirus, such as securing drop boxes and distributing hand sanitizer.

But this is Florida, the nation’s biggest presidential battleground and a mirror of American polarization, where winning an election by more than a percentage point is considered a landslide. And here, to crib Faulkner, the past is never really past.

The most pressing concern is the surge in mail ballots expected as a result of the pandemic and a corresponding rise in envelopes missing signatures or signatures not matching the ones on file, both of which could result in rejected votes. Florida allows voters to “cure” deficient ballots but that requires time for supervisors to notify them of the problem.

That vulnerability is obvious. Others are less so.

An intrusion by Russian hackers into at least two Florida counties in 2016 has never been fully explained, raising questions about whether the state might be open to attack again, in spite of a slew of upgrades that officials contend have secured the system.

Civil rights groups complain that the Republican leadership in the state is itself raising last-minute obstacles to some voters, including those intending to use convenient drop boxes and former felons who only recently regained their voting rights.