Home » Americas » US midterm polls start to open: Who will control Congress?

US midterm polls start to open: Who will control Congress?

Tens of millions are expected to cast their votes in Tuesday’s contentious midterm elections to decide the US Congress. 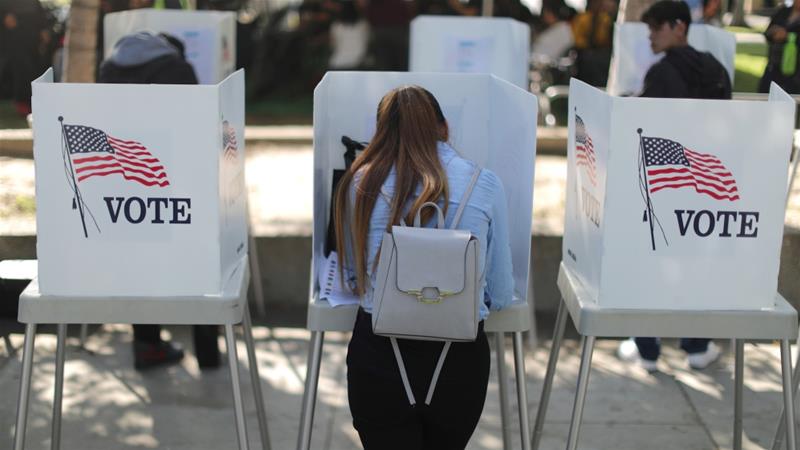 The first voting centres have opened in US midterm elections largely seen as a referendum on President Donald Trump’s first two years in office.

Tens of millions of voters are expected to cast their ballots, and the results will decide all 435 seats in the House of Representatives, 35 of 100 Senate seats and 39 state and territorial governorships.

Although voter participation has traditionally been lower in midterm elections, which are held every four years and do not change the presidency, early voting surged and voter enthusiasm was high.

And the weeks leading up to Election Day were spotted with a string of violent incidents, including the deadly shooting rampage of a Pittsburgh synagogue and a series of pipe bombs being mailed to some of Trump’s most prominent critics.

During the campaign season, Democrats hoped to prompt a “blue wave” and flip several Republican-controlled states.

As of Monday night, the elections prediction website FiveThirtyEight guessed that Democrats had a nearly 80-percent chance of winning the House of Representatives.

The Republicans, however, enjoyed a four-in-five chance of retaining control of the Senate, according to the website.

On Monday night, Trump made his final pitch to voters by doubling down in his attacks on a US-bound caravan of refugees and migrants, who he falsely linked to “crime” and the Democrats.

“The Democrat platform is a 2018 socialism, open borders edict,” Trump told a crowd in Cleveland, Ohio, falsely claiming that “Democrats are inviting caravan after caravan” into the US.

Catch up on the latest on the US midterm elections by following Al Jazeera’s live blog.