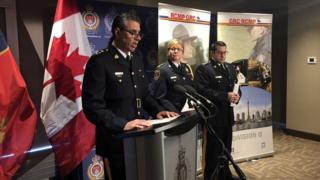 A youth has been arrested in Canada on a charge of facilitating a terrorist activity after an FBI tip-off, authorities say.

The Kingston, Ontario, resident faces an additional count of counselling a person to plant an explosive with intent to cause death or injury.

Police said a small plane recently spotted flying over the town at odd hours was part of their investigation.

A second individual was also arrested, but no charges have yet been filed.

The youth and the second person, an adult male, were detained on Thursday in Kingston, a city some 200km (125 miles) from Ottawa, the country’s capital.

Authorities described the pair as friends.

Under Canadian law, the identity of a youth accused of a crime is kept confidential.

US authorities flagged to their Canadian counterparts a “substantiated and credible attack plot”, though there was no planned target or timeline, police said.

One home was evacuated in the early morning hours on Friday after police found what they believe was an “explosive substance” that was detonated by police bomb squads.

Ch Supt Lesage called the charges on Friday “significant”, but said there was no imminent threat to the community. The investigation is ongoing.

The second person was identified by the Canadian Broadcasting Corporation as Hussam Eddin Alzahabi, 20. Police did not confirm his identity.

In an interview with the CBC following the arrests, Alzahabi’s father, Amin Alzahabi, said his son would not “do anything against any human, humanity”.

Kingston Archdeacon Bill Clarke confirmed to the BBC the Syrian family had come to Kingston as privately sponsored refugees in the summer of 2017.

A coalition of local churches came together three years ago to bring a refugee family to Canada.

Bronek Korczynski, one of the sponsors, told Reuters he worries the arrests could affect perceptions of Muslims and refugees in Canada.

“That is a fear, because that’s the kind of ill-informed knee-jerk reaction that puts any group in potential harm’s way,” he said.

Canada’s federal police force worked with a number of law enforcement and intelligence agencies, including the FBI, on the investigation.

“Investigations of this nature are complex and require significant time and resources to come to a successful conclusion,” Ch Supt LeSage said in a statement on Friday.

The federal public safety minister said the country’s threat level remains at medium, where it has been since 2014.