The Man Who Turns Back New York City’s Clocks, Hand by Hand

The end of daylight saving time was approaching — clocks are supposed to be turned back Sunday at 2 a.m. — and Mr. Schneider had gone to City Hall to turn back time.

Mr. Schneider’s actual title is a bit more grandiose than his badge description. He is the city’s official clock master and he has been tending some of the city’s grandest public clocks since the late 1970s.

His year-round maintenance includes timing adjustments — although these old clocks are surprisingly accurate, he said — and repairing the gears, levers and chains behind those giant clock faces that some people still rely on even in the smartphone age. 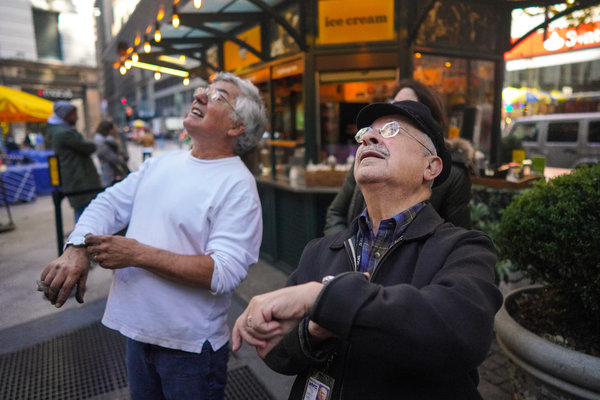 He also replaces worn-down or broken parts and always applies liberal amounts of oil to the old mechanisms, using his “Wizard of Oz” style oil can.

“It’s a dying art — there are fewer people around today who know what to do with these things,” said Mr. Schneider, who oversees a dozen clocks under the jurisdiction of the Department of Citywide Administrative Services, which operates 55 city-owned buildings.

Age has not kept Mr. Schneider from getting to the clocks, often by climbing into tight corners unknown to most New Yorkers.

This week was devoted to the biannual ritual of adjusting the clocks in accordance with daylight saving time, moving them an hour forward in the spring and an hour back in the fall.

In the hallways and offices in City Hall, he seemed to know the entire security staff, as did his longtime assistant, Forest Markowitz, 68.

In a third floor office, he turned back an old manual wall clock one hour by moving the hands forward 11 hours, since turning the hands backward could break the mechanism, said Mr. Schneider, who then stood listening to the pendulum swing, clicking softly as the city bustled below.

“After a while, it’s like a heartbeat — you learn to listen for idiosyncrasies in the rhythm,” said Mr. Schneider, an Army veteran who is an ordained rabbi and lives in Sheepshead Bay, Brooklyn.

He finished adjusting a half dozen wall or grandfather clocks in City Hall and was now ready for the big one — the tower clock that is visible from the street. Mr. Schneider climbed up a ladder through a hatch and onto a catwalk on the roof. He unlocked the clock tower to inspect the mechanism of the 1918 four-faced clock. It is still intact with its original gears, though they are now powered by two small electric motors, instead of weights.

For several minutes, Mr. Schneider twisted the drive shaft leading to a cluster gear overhead that branched out to the four respective clock faces.

He set the proper time according to his watch, which is connected by cellular service to the National Institute of Standards and Technology in Fort Collins, Colorado.

“As long as I know I’m in the ballpark,” said Mr. Schneider, who retired from his city job in 1995, but continues to work part time for the city.

He maintains clocks in Staten Island Borough Hall, the old Harlem Courthouse on East 121st Street and the former New York Sun Building on Broadway in Lower Manhattan, and usually moves them backward or forward a few days before dictated by the calendar.

Mr. Schneider’s role as New York City’s version of Father Time began in the 1970s when he was working as a supervisor for the city’s Human Resources Administration.

He would regularly pass 346 Broadway, which was then a city-owned building near Worth Street with a grand, four-faced tower clock that had been broken for years. This bothered Mr. Schneider, for it was a visible reminder of how broken the city was during the fiscal crisis of the 1970s.

He and a fellow worker, Eric Reiner, persuaded city officials to let them fix the clock during their lunch hours. Mr. Schneider had no experience with clock repair aside from his childhood years when he would take little clocks apart. “But,” he said, “I could never put them back together.”

Still, he was handy and willing.

“I learned as I went,” he said. “I’d go around to watchmakers and a lot of them took time off to explain things to me.”

Once he fixed the tower clock, city officials began letting him use much of his workday to repair other prominent city timepieces.

In 1992, Mayor David N. Dinkins named Mr. Schneider the city’s clock master, a position that had been vacant since the late 1800s, Mr. Schneider said.

Some public clocks in New York City are still manually powered by weights. But many others, while retaining their original machinery, have had their weights replaced with small electric motors that drive a still-intact intricate gear structure.

To add digital timing devices would be heresy to Mr. Schneider, since mechanical clocks have become increasingly rare and stand as symbols of great American clock making.

One example is the clock atop the Bell Ringers’ Monument in Herald Square, which Mr. Schneider and Mr. Markowitz adjusted on Wednesday morning.

Mr. Schneider looked over a black, sooty mechanism known as the strike, which powers Stuff and Guff, the two bronze bell ringers who swing the bronze hammers that appear to hit the monument’s bell every hour.

Mr. Schneider fixed a lever that had come detached from one of the rods leading to the figures. He and Mr. Markowitz also lubricated gears that became sticky each time the minute hand hit the 50-minute mark.

Phyllis Cohen, director of public art for the nonprofit Municipal Art Society, who helped coordinate a restoration of the memorial, walked by and greeted the two men.

“They’re the quiet, understated heroes of the city — they keep the gears going,” she said. “They don’t make people like Marvin anymore. He’s a legend.”

Once, because of a glitch, the Herald Square clock kept tolling incessantly, recalled Mr. Schneider. When he showed up to fix it he was nearly accosted by a group of homeless men who complained that they could no longer sleep.

“One of them said, ‘Thank God you’re here — we haven’t been able to sleep for two days,’” Mr. Schneider recalled. “Once I fixed it, they were my best friends.”

Over the decades, every mayor has had his own relationship with the clocks and therefore with Mr. Schneider.

Mr. Dinkins treasured them as historical pieces. Rudolph W. Giuliani and Michael R. Bloomberg ran tight ships and were adamant that the clocks be synchronized.

He recalled of Mr. Bloomberg, “Compared to his computer, the clock on the wall was always 15 seconds apart, and it irked him.”

There is less tension under the de Blasio administration, he said, which is just as well, since the old clocks can sometimes lose proper time by several minutes, sometimes because of weather or aging parts. But most, like the City Hall tower clock, keep good time because of great craftsmanship, Mr. Schneider said.

“They advertised it as being accurate to within 10 seconds a month, which is good enough for the average Joe’s schedule,” said Mr. Schneider, who rolls his eyes at obsessions with knowing time down to the second.

“It’s what you call overkill,” he said. “We’re not dropping astronauts on Mars.”

Corey Kilgannon is a Metro reporter covering news and human interest stories. His writes the Character Study column in the Sunday Metropolitan section. He was also part of the team that won the 2009 Pulitzer Prize for Breaking News. @coreykilgannon • Facebook

Chang W. Lee is a staff photographer. He was a member of the staff that won two 2002 Pulitzer Prizes: one for Breaking News Photography and the other for Feature Photography. Follow him on Instagram @nytchangster.