From his perch, riding through Brooklyn on a black bicycle, Peter Ciaccia noticed things that only someone with his experience and, more to the point, his responsibilities, would notice.

A dumpster needed to be moved from 94th Street in Bay Ridge. Dedicated “no parking” signs were not up yet, and he wondered when they would be.

It was two weeks before Sunday’s New York City Marathon, and Mr. Ciaccia’s last as the race director. It was time for the annual spot check of the 26.2-mile course.

Dressed in layered clothing to combat high winds and temperatures in the low 40s, he advanced in a 10-person peloton composed of New York Road Runners staff members to inspect the route for any potential problems that would need to be addressed before more than 50,000 runners take the stage.

“It’s a little bit of a ballet,” he said. “We’re moving people all over. If you had them all just run, they’d crash into each other. It would be like bumper cars.” 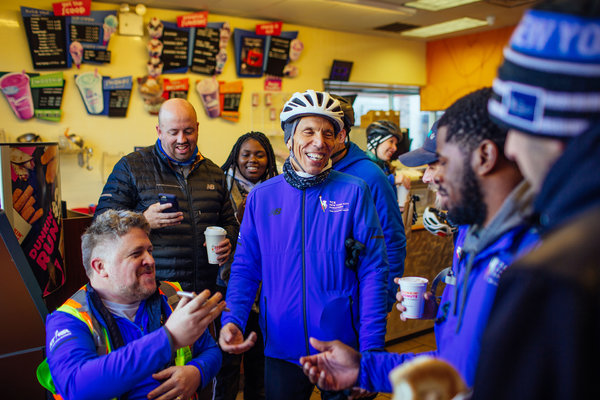 For Mr. Ciaccia (pronounced CHA-cha), it was his last dance with the details. After 18 years with New York Road Runners, the last four as the marathon’s race director, Mr. Ciaccia, 65, reflected on his tenure by eyeing milestones and revisiting old haunts along the path.

It was his 10th annual inspection outing that also served as a reminiscence ride, with no one clocking his time. By day’s end, he estimated that there would be 12 stops at his favorite coffee shops.

But even with fortification from numerous breakfasts along the way, and a bicycle to navigate the course, getting there was no easy task.

Just a mile in, he braced for a bridge that led into the marathon’s maw. “I think the wind is going to be in our face as we are going over the Queensboro Bridge, which is the worst climb in the world,” he said. “The course is undulating. There is always something going on with this bike ride.”

Mike Collins, a retired city police officer, held an Irish flag in his right hand as he called out to the group. He motioned toward a choke point caused by ongoing construction for subway tunnel rehabilitation on the N and R lines. It stretched from 52nd Street to 58th Street, across from the Irish Haven, a pub at the corner of Fourth Avenue.

“I don’t know what you’re going to do out there,” Mr. Collins said, “but normally that is never like this. Never.”

An orange sign emblazoned “SLOW” was affixed to a chain-link fence.

“We’re working with D.O.T. on it,” Mr. Ciaccia said. “It’ll be here, but we’ll get through it. It’ll slow people down and they’ll come into your place.”

“Numerous people use the bathroom, have a quick shot of, um, Guinness basically,” Mr. Collins said. “Maureen will be cooking soda bread, too.”

“What time do you open up?” Mr. Ciaccia said.

“We’re open before we should be open,” Mr. Collins replied.

“On my way down, chuck me a piece of that soda bread,” Mr. Ciaccia said. “You know, I might jump in here for a Guinness on my way down the course. Not today! I’d be swerving.”

There was plenty to elude: Obstacles that no elite marathoner ever encounters dotted the streets. There were double-parked trucks and car doors swung open. City buses idled eight deep by Fourth Avenue and Flatbush Avenue because the Q train was down for repairs. Mr. Ciaccia looked at the clock atop the Williamsburgh Savings Bank Tower. He used it to orient himself.

“That points the way to heaven,” he said. “So much has changed over here.”

Constants remained, too. It has always been a critical space as runners lean left along Flatbush before turning right onto Lafayette Avenue, where trees shade the asphalt and brownstones line both sides. Denizens perform “The Electric Slide”; Bishop Loughlin High’s band plays “Gonna Fly Now,” the theme song from “Rocky.”

Mr. Ciaccia called it his favorite part of the course as he admired the russet colors of Autumn, and the Halloween decorations on display. He has photos of fans hanging out windows to cheer runners.

“Kind of like the Kentucky Derby,” Mr. Ciaccia said. “It gets intense down here.”

He learned early that not every neighborhood wants noise. In Williamsburg’s Hasidic community, the Road Runners purposely do not put any music or bands.

“It’s not their thing,” he said. “We’re very respectful.”

He can be nostalgic, too. Farther down Bedford Avenue, he noticed a closure.

“I can’t believe they closed New York Muffins,” he said. “That was a go-to.”

Bells at St. Anthony–St. Alphonsus Church rang out above Manhattan Avenue as the troupe made a right onto Greenpoint Avenue’s downhill toward McGuinness Boulevard. It is known as a treacherous stretch for wheelchair racers, who have crashed while trying to negotiate a sharp turn.

Ted Metellus, a director for event development in his first year with the Road Runners, was out in front and went straight at a traffic light where a left should have been made. On race day, hay bales are positioned to protect wayward racers. None were set up today, though.

They continued up the Pulaski Bridge. He stopped to pose, like a model in a plank position, atop a cement barrier at the 13.1-mile marker that is spray painted in orange on a wall year round.

“Graffiti art has really come a long way,” Mr. Ciaccia said. “In my youth, the height of graffiti, it wasn’t considered art back then. The vandals!”

Vintage has always been en vogue for Mr. Ciaccia. The next stop was Sweet Leaf, which he called a “punk rock cafe,” in Long Island City. Customers thumbed through the collection of vinyl albums in the record room. It brought him back to his music industry days when he held executive positions for CBS Records and Sony Music Entertainment. One patron wound up in the middle of the riders’ order.

Mr. Ciaccia, the son of southern Italians, grew up by West 233rd Street and Broadway in the Bronx. He went to Lehman College, refers to Van Cortlandt Park as “Vanny” and trots out D.J. Kool Herc to perform on stage for some events. He does what he can for his home borough, but also knows there is only about a mile of the course in the Bronx.

Each year, Rubén Díaz Jr., the borough president, asks Mr. Ciaccia to give the Bronx a greater share of the route. Mr. Ciaccia insists he is limited by the race’s footprint, but when the city built a sidewalk at Mile 8 in Brooklyn, Mr. Ciaccia repurposed the altered mileage in the Bronx, giving the borough “a little more distance.”

“I said, ‘The only way we can do this is if I finish it in Yankee Stadium. You got to let me finish in Yankee Stadium,’” Mr. Ciaccia said. “Maybe one year they will do that. Not in my tenure.”

Over the Willis Avenue Bridge they went, crossing the Harlem River into the Bronx. They pedaled past broken glass in the middle of Rider Avenue. When Mr. Ciaccia and Jim Heim, the technical director who will inherit Ciaccia’s job, came across an orange construction cone turned upside down, they stopped and lifted it up. They saw it was being used as a plug for an opening in the pavement.

“Looks like the start of a sink hole,” Mr. Heim said.

“This will all get cleaned up,” Mr. Ciaccia said.

Up a hill and into a headwind, Mr. Ciaccia trailed his staff along Fifth Avenue. Skateboarders circled him as he talked about the finish line.

“There’s a whole world of senior discounts to explore,” he said, looking ahead to his retirement. “I can go to the movies three times a day for five bucks.”

He mapped out a few of his next steps. Soon after completing his marathon responsibilities, he will board a plane to vacation in New Zealand and Australia. Until then, he remained on the clock. When he applied his brakes for the last time, he was at Engineers’ Gate, where marathoners enter the park.

“It’s going to be bittersweet. Actually, a little surreal,” he said. “Now it’s like, ‘Oh my God, it’s around the corner.’”

It had been more than seven hours on course. Mr. Ciaccia picked up his prize — not a marathon medal, but a street-vendor pretzel — and ambled over to the statue of Fred Lebow, the marathon’s founder. Lebow, his eyes trained on his wristwatch, stood sentinel. Mr. Ciaccia noticed that a few leaves covered his predecessor’s face. He added one more chore to his to-do list.

“We really need to trim that tree,” he said.