Home » Americas » The Hall of Fame for Great Americans: As Forgotten as Some of Its Members

The Hall of Fame for Great Americans: As Forgotten as Some of Its Members

Spiders like Ralph Waldo Emerson’s face. They have built a sprawling, spreading web in his left eye.

That is not the only problem at something called the Hall of Fame for Great Americans, which a preservation-minded group is putting on its annual list of “at-risk landscapes.” The group, the Cultural Landscape Foundation, says “water damage, pollutants and the effects of weathering” have taken a toll on the century-old structure, on the campus of what is now Bronx Community College.

Perhaps it is surprising that there is even a hall of fame in the Bronx. There is a reason: The campus was built by New York University as the country was sailing toward the 20th century. It was a time of big ideas and big ideals. The Hall of Fame for Great Americans was created to celebrate those who had thought them or had held them dear, and to do so in a singularly American way.

To get into the Hall, someone had to be elected.

But the Hall’s last election was held in 1970s. The busts of the four people chosen were, as far as anyone knows, never commissioned.

The Hall of Fame, which is more of a semicircle than a hall, is an open-air gallery of statues of important Americans — or, at least, Americans who were considered important when they were chosen.

And so Abraham Lincoln is across from Thomas Jefferson, which is just around a corner from George Washington. Booker T. Washington is four over from Susan B. Anthony, and Harriet Beecher Stowe, who wrote “Uncle Tom’s Cabin,” the novel that stirred the abolitionist movement nationwide, is close by.

Two were evicted last year. The statues of Stonewall Jackson and Robert E. Lee were taken down after the clashes in Charlottesville, Va., fomented by white nationalists opposed to the removal of a Robert E. Lee statue there. The Hall of Fame’s Lee had stood next to its Ulysses S. Grant for decades.

Still others were the work of artists who were themselves famous. The Emerson was signed by Daniel Chester French, better known for the huge, seated Lincoln statue in the Lincoln Memorial in Washington. The Lincoln in the Hall of Fame was the work of Augustus Saint-Gaudens. The Saint-Gaudens is a few steps back.

Yes, there is a Saint-Gaudens in the Hall of Fame, because he was once that well known. Among many other works, Saint-Gaudens did the gleaming statue of Gen. William T. Sherman in Grand Army Plaza, at the Fifth Avenue end of Central Park.

The Hall of Fame has genius inventors and generals and tunesmiths, as well as Walt Whitman, Henry Wadsworth Longfellow and Sidney Lanier. The Wright Brothers, Wilbur and Orville, are across from Thomas A. Edison and one over from the pioneering peanut researcher George Washington Carver, who is next to Thomas Paine. Common sense would suggest that there was no other place to put Paine, the colonial-era patriot who wrote the anti-British pamphlet “Common Sense.”

For generations, the Hall drew tourists “like an urban Mount Rushmore,” as well as national news coverage about who was voted in. But when Michael T. Kaufman wrote those words in The New York Times 25 years ago, he added that the Hall had “outlived its glory, its proverbial 15 minutes.”

Today, safe to say, many of the millions of annual visitors to New York — and even many New Yorkers themselves — have never heard of the place. 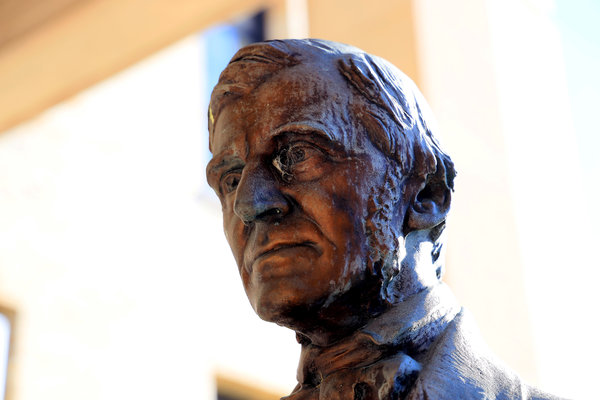 If the Hall once reflected who’s who, it has become a snapshot of who was who. Charles A. Birnbaum, the executive director of the Cultural Landscape Foundation, called the Hall a tribute to “the changing nature of fame itself.”

“This was one of the touchstones of defining what American identity was.”

So, the Hall was a product of a different America, in a different city, on a different campus. N.Y.U., in financial trouble in the 1970s, packed up and left, consolidating its operations around Washington Square. New York State helped out by arranging for the City University of New York to buy the campus for $62 million and turn it over to Bronx Community College, a far different kind of institution. Minorities make up 96 percent of the students at Bronx Community, according to the website Community College Review, and the majority is Hispanic. But the Hall is short on minorities and women.

The faces on the statues do not show it, but the Hall has more problems than Emerson’s eye. The masonry is cracked in places and crumbling in others, and, as the foundation put it, “Many statues have deep stains from biological contaminants.” That is a delicate way of referring to bird droppings.

The foundation also warns that runoff from copper in the roof has discolored the bronze tablets below the statues. The template for the tablets was the work of Louis Comfort Tiffany, the Art Nouveau genius who was the first designated design director of the jewelry store his father had started.

“These repairs are beyond a public college’s ability to afford,” said Richard F. Ginsberg, an interim assistant vice president of Bronx Community, adding that less than 10 percent of the college’s budget goes toward capital projects, a category that includes equipment for the classrooms, as well as utilities and maintenance. Mr. Ginsberg said Bronx Community has a foundation that hopes to raise money to preserve the Hall.

The architect Samuel G. White, who is involved in efforts to evaluate and renovate the library adjacent to the Hall, said the Hall of Fame was “an afterthought” — and, speaking of afterthoughts, this is probably the moment to note that his great-grandfather designed the Hall, the library and the rest of the campus for N.Y.U. His great-grandfather was Stanford White, who was famous as an architect and infamous for an affair with a woman who later married a jealous industrialist named Harry K. Thaw. Thaw shot him to death in a building White had designed, Madison Square Garden.

As for the Hall, Mr. White said the original plan called for a semicircular museum behind the library — “a 19th-century cabinet of curiosities, with paintings and Indian arrowheads and a giant piece of coral they still have.”

But the curved structure lacked something, he said, and his great-grandfather designed a colonnade on top of what was to be the museum.

“Somebody had to come up with a use for it, and they created the Hall of Fame,” Mr. White said.

It predated the other halls of fame. As Mr. White said, “The one in Cooperstown wasn’t created until the ’30s.”

Mr. White’s real passion is not the Hall, but the library it surrounds. The library, largely empty since N.Y.U.’s departure, needs $44 million in work, Mr. Ginsberg said, citing the same analysis that provided the repair estimate for the Hall.

Now, about Sylvanus Thayer. He was an early superintendent of the United States Military Academy whom American Heritage magazine described as “the man who made West Point.”

William Thomas Green Morton? He was a 19th-century dentist whom the Hall credits with being the first to use ether as a general anesthetic, in 1846.

And Edwin Booth was an actor and a 19th-century celebrity whose younger brother, John Wilkes Booth, was Lincoln’s assassin. In the Hall of Fame, the Booth is just steps from the Lincoln.