Home » Americas » The Disparities in Access to New York’s Parks

Weather: Mostly sunny, with a high in the low 80s. 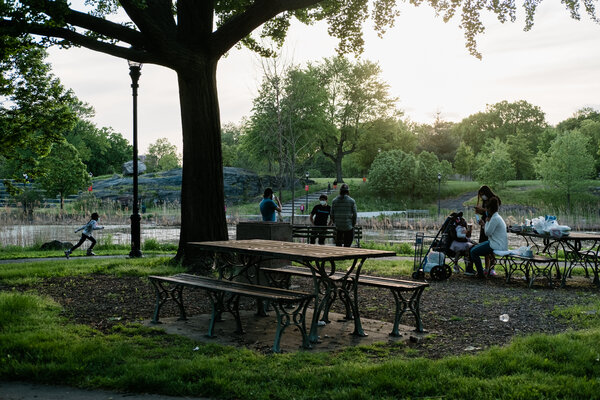 The pandemic laid bare inequalities in many aspects of life in New York.

One of those lies in park access for low-income New Yorkers and people of color. Those groups have significantly less park space available than residents of neighborhoods that are predominantly white and wealthy, according to findings released today by the Trust for Public Land, a conservation group that helps create public parks across the country.

Here are three things to know:

The disparities in park space are stark.

Still, the gaps in access in New York were less dramatic than the national averages.

On the group’s ranking of the county’s 100 most populous cities, which takes into account several factors, including public investment in parks, amenities and 10-minute-walk access, New York placed 11th.

The pandemic highlighted many of the inequities.

During the worst months of the pandemic, the city’s network of more than 2,300 parks became critical to maintaining physical and mental well-being for many New Yorkers. But an analysis last year from the Trust for Public Land found that the average park size was 7.9 acres in predominantly Black neighborhoods, leaving residents with less space compared with largely white areas, where the average was 29.8 acres.

City officials have said access to parks has significantly expanded in recent years, with revamps of small parks and changes to turn larger ones into community anchors in several low-income neighborhoods, along with new parks at some public housing complexes.

A lack of park access can have larger implications.

Research shows that access to green space and time spent in nature correlate with positive health outcomes like lower stress and lower overall mortality. Parks also contribute to bringing down the temperatures of neighborhoods, which differ starkly across New York, particularly in the summer.

“Closing the park equity gap is contributing to closing the gap in health outcomes, in climate vulnerability and in inequitable access to economic opportunity,” Diane Regas, the president and chief executive officer of the Trust for Public Land, said in an interview.

The Vessel, a Tourist Draw, to Reopen With Changes After Several Deaths

Will New York Finally Have a Bus Mayor?

Summer is here. Vaccines are here. After a tough year, New Yorkers will finally be able to fully explore the city again. We’re bringing back our Summer in the City newsletter to help you navigate the city and discover the best things to do, see and eat this season. Sign up here.

A look at the ways screening algorithms at New York City schools can further segregation and disproportionately affect students of color. [The City]

How long will the pandemic rental market in New York City last? [Curbed]

As New York’s beaches open over the weekend, mobile vaccination sites will be stationed at some in another effort to increase inoculations. [Time Out]

Earlier this spring, a party raged on the third floor of Showfields, an experiential retail store in Manhattan. To get there guests rode in an elevator lined with gold tinsel and a mirror.

On the third floor were about 20 masked people, dressed in neon shirts and sparkly pants, grooving on roller skates, some of which lit up as they moved. Under a disco ball, a D.J. played hip-hop while skaters spun in circles and got lost in the music.

Roller-skating is in vogue these days, but longtime New Yorkers have seen it all before; during the second half of the 20th century, skaters would dance all day in city parks and party all night in New York’s multitude of indoor rinks.

In 1980 — the height of roller disco — there were indoor rinks across New York City, according to the Central Park Dance Skaters Association. Now, old-school skaters can only recall one that’s still around: RollerJam USA, in Tottenville, Staten Island.

These days the rinks might be gone, but that hasn’t stopped roller-skating — an acknowledged pandemic trend at this point — from taking place in playgrounds, basketball courts, boardwalks and stores. Some pop-up events, like the one at Showfields, are elaborate, with D.J.s, entry fees and special event permits.

Jocelyn Marie Goode, an artist and the organizer of the Showfields pop-up, put on skates after a hiatus of several years for a masked and socially distant roller party at a Queens nightclub in late 2020. “It was the first time I had seen joy all year,” she said. “These people were happy, and it was Black people being happy.”

This inspired Ms. Goode, 39, to research the intersection of roller-skating and Black culture. Three months later, she created the African-American Roller-Skate Museum, which stages pop-up events around the city. Her first big program, N.Y.C. RollerSkate Week, took place for a week in April.

More than 500 people signed up.

It’s Thursday — lace up and enjoy the music.

Her job often started in the evening before I got home from mine. She would take the train to the subway stop that was right below the building where I worked. I would be waiting there at the turnstile, and she would get off the train and hand the baby over to me before running back to get on the train again.

She usually had to wait for the next train, but on this particular day, the train she had gotten off was still in the station and she was able to return to the seat she had been sitting in.

The woman who was sitting next to her was visibly perplexed. She waited as long as she could before saying something.

“What did you do to that baby you were holding?” she blurted out.