LOS ANGELES — These are the places seared into the memories of local residents, the places many people who just come to visit never see. Now, after the fires that ripped through Southern California this month, they are unrecognizable, or unimaginable, as the spots where nature brought joy, peace or relief.

The wildfires in Los Angeles and Ventura Counties were nowhere near as deadly as those in the north. But just as they destroyed homes, they also brought a different kind of devastation, ravaging many of the region’s most prized outdoor recreation areas.

Almost all of the federal land within the Santa Monica Mountains National Recreation Area — a staggering 86 percent, totaling some 20,000 acres — was burned by the Woolsey Fire, according to the National Park Service.

Among the blackened and charred are the Old West film sets at the Paramount Ranch, which have been featured in movies and television shows for decades. The 155-year-old Diego Sepúlveda Adobe, a mission station that was still being restored from damage suffered in the 1994 Northridge earthquake, is now “just a shell,” in the words of one archaeologist.

At Malibu Creek State Park, the campground survived, but the landscape beyond is largely unrecognizable. That includes the replica of the set from the “M*A*S*H” television series, a supremely popular hiking destination, which had replaced the original set after that was burned in a 1982 brush fire. Two popular Jewish summer camps, Hess Kramer and Gindling Hilltop, were almost completely wiped out by the flames.

The list goes on, including Solstice Canyon, the Circle X Ranch and the Peter Strauss Ranch, with its popular concert venue where Johnny Cash and Willie Nelson performed.

Residents who have lived through devastating wildfires point out a source for optimism: The moonscapes left behind often give way to a riot of colorful wildflowers and plants, making the cycling, hiking and camping adventures even better. 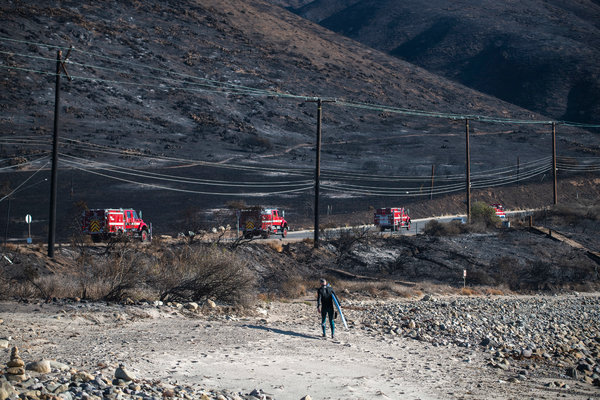 Jennifer Medina is a national correspondent based in Los Angeles. Since joining The Times in 2002, she has also covered politics in New York and Connecticut and spent several years writing about New York City public schools. @jennymedina • Facebook