Home » Americas » Memorializing a Year of Loss in New York

Memorializing a Year of Loss in New York

Weather: Mostly sunny today, with a high in the low 80s. Over the weekend, mixed sun and clouds, with a chance of afternoon storms and highs around 90.

Alternate-side parking: In effect until May 31 (Memorial Day). 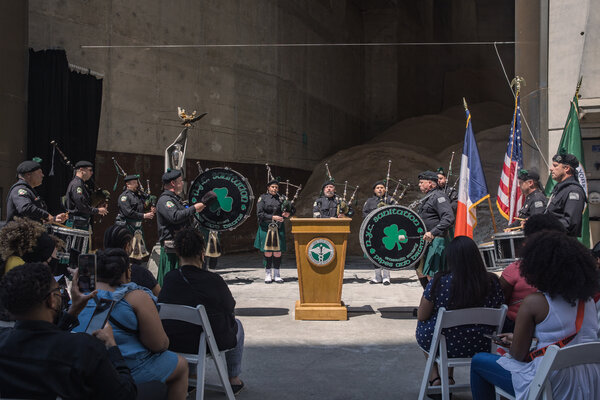 An arrangement of homemade signs, letters and flowers near the gates of the Green-Wood Cemetery on Fifth Avenue in Brooklyn. Another in front of a nursing home in Cobble Hill. A mural on a parking lot in Flushing Meadows Corona Park.

Early in the pandemic, temporary memorials were set up across New York for those who died from the coronavirus.

Now, as the city starts to pick up its prepandemic rhythm and workers returning to the office face grim reminders of co-workers who have died, city agencies are grappling with how to recognize the lives lost over the past year in a more permanent way.

[Read more about how city workers and other New Yorkers lost may be memorialized.]

Here are three things my colleague Corey Kilgannon learned about the plans:

Officials from the city’s Department of Sanitation unveiled yesterday what they said was the city’s first permanent, free-standing memorial to victims of the pandemic. The 600-pound statue, dedicated to nine sanitation workers lost to Covid-19 last year, was displayed in downtown Manhattan outside one of the department’s storage structures.

It will be shown at several department garages this summer. After Labor Day, it will be installed permanently outside a garage on Spring Street in Manhattan.

More than 300 city employees have died from the virus. Another 159 subway, train and bus workers employed by the Metropolitan Transportation Authority, a state agency, have also died.

City officials have not announced any specific plans for a memorial to city workers or to the more than 30,000 New Yorkers who have died from Covid-19. But smaller efforts have been made for months. In January, for example, the M.T.A. set up digital displays inside subway stations that showed portraits of fallen workers.

Other agencies are now grappling with how to memorialize their fallen workers. The city’s Department of Correction, which has lost at least 11 staff members, plans to create a memorial garden on Rikers Island.

City Councilman Mark Levine has introduced legislation that would establish a memorial to honor the estimated hundreds of virus victims buried on Hart Island in the Bronx. And seven fallen workers at Elmhurst Hospital in Queens have been remembered with a painted triptych of a tree with leaves displaying handwritten messages from surviving co-workers.

What’s the Next Mayor of New York’s One Big Idea?

Mayoral Candidates Agree on One Thing: No More Virtual Debates

Mayor Accused of Fraud Has New Problem: Drug Charges for Her Husband

A close look at how the coronavirus moved through New York in the earliest months of the pandemic. [Gothamist]

Gig workers for companies like Uber could soon gain the right to unionize in New York, though they still would not be considered employees. [The City]

What we’re watching: The Times’s Metro political reporter Jeff Mays discusses the mayor’s race and what role the ongoing spike in shootings in New York may play in the campaign’s final weeks on “The New York Times Close Up With Sam Roberts.” The show airs on Friday at 8 p.m., Saturday at 1:30 p.m. and Sunday at 12:30 p.m. [CUNY TV]

And finally: Your virtual social weekend

Although many performance spaces, museums and community centers are closed, people are finding creative ways to connect through virtual events and programs. Here are suggestions for maintaining a New York social life this weekend while keeping a safe distance from other people.

On Friday at 12 p.m., learn about lost or forgotten stories of rare stonefruit from the artist and orchardist Sam Van Aken, who has a decades-long project to collect and preserve them.

Visit five historic houses in Queens, without leaving the couch, on Saturday at 1 p.m.

On Saturday at 3 p.m., learn about some quirky and unusual transportation with Michael Hearst, the musician and the author of “Unconventional Vehicles: Forty-Five of the Strangest Cars, Trains, Planes, Submersibles, Dirigibles, and Rockets.”

Register for free on the event page.

It’s Friday — take a break in the sun.

Metropolitan Diary: ‘And for dessert?’

I was 23 and hungry and tired after a Sunday of shopping on the Lower East Side when I discovered Ratner’s on Delancey Street. I was shown to a booth, and a bowl of onion rolls and a menu were slapped down on the table.

“What’ll ya have?” the waiter demanded without looking up from his order pad.

“Well, uh … ,” I stammered, looking at the unfamiliar menu.

“You’ll have the stuffed cabbage,” he said. “And on the side?” (He still was not looking at me.)

“You’ll have the kasha varnishkes,” he said, scribbling on his pad and then hurrying off.

Generous portions of food soon appeared, and I ate it quickly.

“So I guess everything was OK,” he concluded as he watched me mop up a last bit of gravy with a piece of roll.

“You’ll have the Nesselrode pie,” he said, and then disappeared back up the aisle.

What would you like to see more (or less) of? Email us: [email protected]