At the time of his assassination in 1968, the Rev. Dr. Martin Luther King Jr. was living in a brick home on Sunset Avenue in an Atlanta neighborhood known as Vine City.

The civil rights leader had moved there in 1965 — the year after he was awarded a Nobel Peace Prize — and the house was a refuge for him, his daughter Bernice King said Thursday. It was a place where the entire family would gather around the dining room table to eat and talk, where family portraits hung on the wall, and where Dr. King and his children used to play games and watch television.

This month, the house became the property of the National Park Service, in preparation for opening it up to the public.

“With greater access to Dr. King’s life and legacy, we can learn more about this country’s past and how his work continues to echo through time,” said Will Shafroth, the president of the National Park Foundation, the National Park Service’s charity arm.

He added that the foundation bought the property, with help from private donors, from the estate of Dr. King’s widow, Coretta Scott King, for $400,000 and transferred it to the Park Service.

There will be at least a year of assessments, repairs and restorations before the house can be made accessible to the public, Mr. Shafroth said.

After Dr. King died, Coretta Scott King stayed in the home on Sunset Avenue and raised their four children. She founded the King Center, a nonprofit resource center, in its basement, and she owned the property for decades before she died in 2006.

“I must say that it wasn’t easy to release our home,” said Bernice King, who moved there when she was 2 years old. “We knew that it was important in order for this home to be preserved — and also to be a part of the greater story told around my father, and even my mother’s life — that it would be best if we transferred it to the National Park Service.”

Atlanta is home to several historical sites associated with Dr. King, including the Ebenezer Baptist Church on Jackson Street where he preached — and where he was both baptized and eulogized — and the house on Auburn Avenue where he was born. (Last month, news surfaced that the National Park Foundation bought that house from the King Center for $1.9 million.) 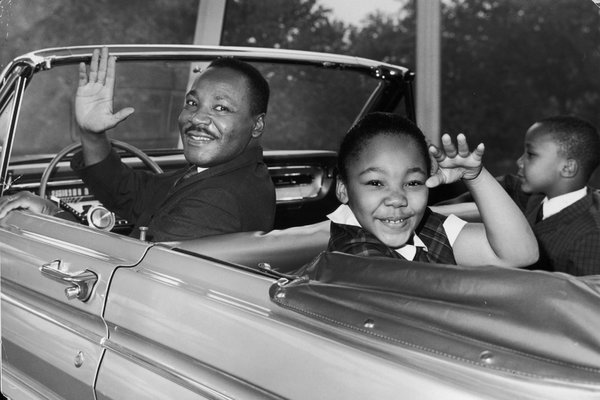 The home in Vine City, a predominantly black community and home to several people who were central to the civil rights movement, is different because it was a place he chose to live with his family.

Vine City is one of Atlanta’s poorest residential areas. Ms. King said the neighborhood was in a period of transition, pointing to Rodney Cook Sr. Park, a 16-acre green space at the northern side of Vine City that was expected to open this year, and Mercedes-Benz Stadium, which opened at the edge of the neighborhood in 2017. The home on Sunset Avenue is expected to become another draw for visitors.

Makeda Johnson, a community advocate and longtime resident of Vine City, said she was happy that the property would be restored because she wanted the neighborhood’s historical legacy to be protected.

Vine City, she added, has long been a place of resilience, creativity and drive. Over the years, she and other residents have worked on several projects, including turning Sunset Avenue into a historic district and developing a local newspaper called Historic Westside News.

But Ms. Johnson said she knew revitalization could be a double-edged sword.

“Urban renewal means urban removal,” she said. “We have to take a different position with Vine City, the community that King chose to call home. We have to demand that revitalization is done with justice, with equity.”

Ms. King said that her mother had wanted the house to become a historical site and that it would be a good way for people to learn about another side of Dr. King.

“I think it’s going to be so important for them to know that he was a family man, that he had children who he raised in this home, and that he’s not out of reach,” she said.

Mr. Shafroth could not say with certainty how long assessments and restorations at the home might take, in part because so much of the National Park Service has gone dark during the federal government shutdown.

But tourists already come by the house even though they cannot go inside, said Ms. Johnson, who was glad to see that the interest is already there.

“Especially now in this season of gentrification, we want to be sure that the next generations coming up will understand the life and the legacy of Dr. King, and other heroes and sheroes that came from this community,” she said.