Home » Americas » Jayme Closs, Who Saved Herself From a Kidnapper, Will Get $25,000 in Reward Money

Jayme Closs, Who Saved Herself From a Kidnapper, Will Get $25,000 in Reward Money

Soon after Jayme Closs, 13, disappeared in Wisconsin in October, officials offered a $50,000 reward for information that would lead to her safe return. Now Jayme, who escaped from a kidnapper after she was abducted and her parents were killed, will receive at least half of it.

That $25,000 was donated by Hormel Foods, the Minnesota-based company that owns Jennie-O Turkey Store, where Jayme’s parents had worked in Barron, Wis., for 27 years.

“First and foremost, Jennie-O Turkey Store is a family,” Steve Lykken, a senior vice president of Hormel and the president of Jennie-O, said on Wednesday. “Here in Barron, our Jennie-O family is dealing with a very tragic situation.” The goal, he added, is to set up a trust fund for Jayme.

The girl’s parents, James Closs, 56, and Denise Closs, 46, were killed on Oct. 15 when an intruder entered their home, shot them and kidnapped their daughter. Jayme was held for 88 days in a cabin 70 miles from her home by a man, identified as Jake T. Patterson, who forced her to hide under a bed whenever he left, trapping her in with heavy items, the authorities said.

She managed to escape on Jan. 10, clawing her way out from under the bed, putting on a pair of men’s shoes and running to a nearby road where she asked a woman for help.

[After her kidnapping, Jayme Closs endured horror, the police said.] 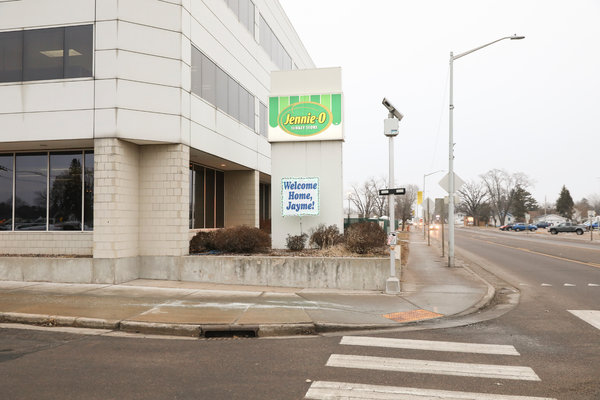 “I’m Jayme Closs,” the woman recalled the girl saying. “I don’t know where I am.”

Jayme has been staying with relatives since she was found.

The kidnapping upended the rural community where the Closses lived. The authorities received thousands of tips. Last month, Jennie-O organized a “Tree of Hope” lighting ceremony for Jayme’s safe return.

“While we are still mourning the loss of longtime family members Jim and Denise, we are so thankful for Jayme’s brave escape and that she is back in Barron,” Mr. Lykken said this week.

The other $25,000 in reward money had been put forward by the F.B.I. Leonard Peace, a public information officer for the agency in Wisconsin, declined to comment on whether it would pay Jayme the money, given that she saved herself.

“Our general practice is to refrain from disclosing details on the final decisions in these matters due to privacy considerations,” he said in a statement. “The F.B.I. evaluates the information provided along with the unique circumstances of the case and its resolution, and determines whether it is appropriate to award reward money.”

[A Georgia case involving escaped inmates and slain prison guards shows that doling out reward money can get complicated.]

But others have chipped in to help Jayme. A representative for GoFundMe confirmed that a campaign started on Jan. 11 to help the girl was verified. So far, the organizer, who is a family member of Jayme’s, has raised more than $34,000.