Home » Americas » Left in a Bag as a Newborn. DNA Testing Helped Her Understand Why.

Left in a Bag as a Newborn. DNA Testing Helped Her Understand Why.

On a frigid December night in 1996, a young woman ducked into an apartment building in South Brooklyn and left a shopping bag in the foyer.

Inside was a 3-day-old girl, along with a remorseful, but tender, letter from the woman saying that said she hoped for a better home for her newborn daughter, Sarah, whose name was written in neat print.

That name, in similar careful print, is now tattooed on the wrist of 22-year-old Eleni Liff, a college student living in Manhattan.

“It’s a piece of my identity that connects me to my beginnings,” said Ms. Liff, whose abandonment in 1996 made headlines and caught the attention of a Manhattan couple aching to adopt a child.

They took her in and provided the kind of upbringing her birth mother — a struggling single parent with no health care — could not.

Eleni loved her adoptive parents but was obsessively curious about what happened to her when she was born.

By age 6, she had nearly memorized her birth mother’s note, which she often tucked under her pillow. 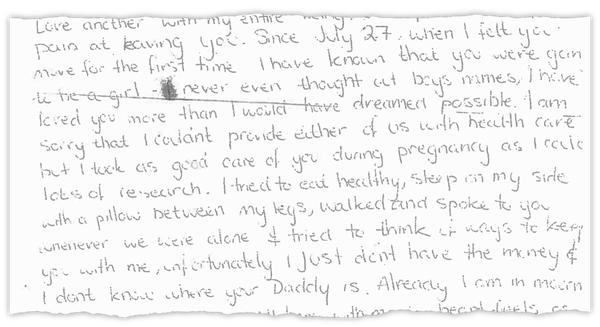 The letter — whose last line reads, “May the angels watch over you and may God forgive me’’ — also heightened the drama and mystery of her abandonment. Why would her mother do it? And whatever became of her biological parents?

So Ms. Liff did what many others have: she turned to DNA testing and the internet. She found answers, some happy and others heartbreaking, but the information was always revelatory.

Through the genetic testing company 23andMe, which says it has sold 10 million kits and that 95 percent of buyers have connected with relatives who are in its database, Ms. Liff found her parents.

Ms. Liff connected with a biological cousin who linked her with her biological father, Keith Cruz.

Mr. Cruz, 52, was from the Bensonhurst neighborhood in Brooklyn but had moved to Long Island where he lived with his wife and three children.

In February, Ms. Liff called Mr. Cruz after rehearsing with her boyfriend the various scenarios the conversation could take.

Mr. Cruz knew why Ms. Liff would be calling, but he could still not believe what she was telling him. He was so nervous to be speaking with the daughter he had never met, that he “almost fell down a flight of stairs.” But within moments, he said, “It was like I had spent every day with her — I felt instantly at ease.”

They arranged to meet recently near Ms. Liff’s apartment, at Tom’s Restaurant, the diner of “Seinfeld” fame. He showed up with flowers, grabbed a booth near a window and held his breath as he watched her approach.

“My heart stopped,” recalled Mr. Cruz, a trash collector. “This 22-year-old girl — my daughter who I’d never seen before — was crossing the street. My heart was beating in my chest like a hammer. For that brief second, time seemed to stop.”

There were hugs, tears and chicken nuggets. They rejoiced at how similar they were, in appearance and demeanor, down to their mischievous wit.

“It was like speaking with someone I have known all my life,” he said. Within weeks, both their families had met and welcomed each other into their lives.

Mr. Cruz said he had a brief relationship with Ms. Liff’s birth mother in Brooklyn but never learned she was pregnant. Had he known he had a daughter, he said, “I would have definitely fought to keep her.”

Ms. Liff’s biological mother has been less welcoming. She has exchanged emails with Ms. Liff in recent weeks but has refused to meet her. She declined, in an email, to be interviewed for this article, citing what she said was enduring shame from the excruciating decision to give up her child.

Ms. Liff called the rebuff “crushing and disappointing,” especially given the tender tone of her mother’s heartfelt two-page letter. In it, her birth mother described speaking to her in the womb and falling in love with her smile during their three short days together after her birth.

“The letter sounded like she wanted me in her life, but she’s been standoffish, partly because, from what I gather, it’s so overwhelming,” Ms. Liff said. “She said, ‘You’re the only one who can judge me harder than I can judge myself.’ I told her, ‘I forgive you and I’m not holding you to any standards.’”

But if her birth mother insists on keeping her distance, Ms. Liff has gained another family of sorts elsewhere — at the Brooklyn building where she was left.

Using the original news articles that covered her abandonment, Ms. Liff found the address of the building, in Bensonhurst, and two years ago visited the spot where she was left in a small bare foyer under the building’s apartment buzzers. She left a note addressed to “The people who found me.”

When Annmarie Amato, 70, who still lives in the building, read the note she cried as hard as she did when she first read the letter tucked in with Eleni in the shopping bag on Dec. 7, 1996.

Her son, David Amato, then 19, had found the bag after a bit of serendipity — a usually reliable door lock suddenly became stuck, which gave him pause to glance down and spy a shopping bag topped with sweaters.

“I saw the bag move,” said Mr. Amato, now 41. “I picked it up figuring it was a kitten. I pulled off the sweaters, and lo and behold, there’s a baby underneath.”

Just then, he noticed a car peeling away outside — the birth mother recently told Ms. Liff she had remained outside, watching to make sure someone picked up the baby. The baby was wearing a diaper and a onesie and was wrapped in a sweatshirt, he said.

“I’m an animal lover, so I used to bring stray animals home,” he said. “But that was the first time I’ve come home with a human.”

The episode made a lasting impression on the Amatos and other neighbors. For them, Dec. 7 became a day to remember and wonder what ever happened to Baby Sarah.

Now Ms. Amato and Ms. Liff have formed a bond. Ms. Liff visits Ms. Amato on her birthday and is still listed in Ms. Amato’s cellphone as Baby Sarah, the name they called her in 1996. Back then, she said, her initial maternal impulse was to simply keep the baby, until a friend advised her to call the police, which attracted intense media attention.

In a press room at City Hall known as Room 9, Baby Sarah’s story caught the attention of Bob Liff, a New York Daily News reporter who had recently heard about a different baby abandoned in Brooklyn, which had prompted him and his wife, Lisa, to register as foster parents.

Now, serendipity had brought them another abandoned baby, one they were able to adopt. She came with a letter from her birth mother.

The couple kept Sarah as Eleni’s Hebrew name, to satisfy the birth mother’s request in the letter to “at least have Sarah as part of her name so she will have some link to her past.”

Ms. Liff said that by age 6, she began having recurring dreams in which she spoke to her birth mother and experienced being born in a bathtub. Her birth mother recently told her that, lacking health care and seeking privacy, she gave birth to her at home in the bath tub.

Ms. Liff said she struggled for years with depression. Growing up in crowded Manhattan, she would scour the faces on the streets for anyone who might resemble her.

“Growing up in New York City, you are surrounded by masses of strangers, and I’d look to see, ‘Does this person have my eyes?’” she recalled. “It got hard to look around because I’d think, ‘That woman looks like me.’”

“There were so many unanswered questions, and I would keep trying to piece things together,” said Ms. Liff, who aside from taking college classes also works at a shoe store on the Upper West Side.

Seeking out her birth parents and finding answers has been a “centering” experience, she said, despite the pain and disappointment.

Corey Kilgannon is a Metro reporter covering news and human interest stories. He was also part of the team that won the 2009 Pulitzer Prize for Breaking News. @coreykilgannon • Facebook