The person taking the oath of office on Jan. 20 will face an economic mess.

That will be true whether that’s Joe Biden or Donald J. Trump, and true whether or not the off-and-on negotiations over a new round of pandemic relief yield anything.

Given mass failures of small businesses and continuing astronomical numbers of people filing for jobless benefits, the president will face a situation uncannily similar to the crisis Mr. Biden and President Obama faced a dozen years earlier. If it is Mr. Biden who comes to power, along with Democratic majorities in the House and Senate, he will have something rare: the chance to look at the lessons of recent history and have a do-over.

Mr. Obama’s first legislative priority, the $787 billion American Recovery and Reinvestment Act of 2009, shows what can go wrong when the government spends money on a mass scale to fix an economic crisis. Mainstream economists judge that the legislation helped stabilize financial markets and start an economic expansion that would last a decade. But it also proved underpowered and politically toxic, with lasting consequences for Mr. Obama’s presidency.

It offered fuel for the president’s enemies to portray him as a profligate deficit spender. Yet it was also insufficient to generate a robust recovery; the unemployment rate the month of the 2010 midterm elections was 9.8 percent, nearly as high as it had been a year earlier. That combination of a weak recovery with the perception of wasteful spending helped Republicans retake the House of Representatives.

Most voters never agreed with the view of economists that the recession would have been worse if not for the stimulus bill. In 2010, for example, only 35 percent of Americans in a Pew survey believed that the legislation had helped keep unemployment from getting worse. By contrast, 80 percent of economists surveyed in 2012 said the legislation had resulted in a lower jobless rate that year.

The lesson: If you are going to shoot your shot at fixing the economy, you had best go big enough to not merely stop it from collapsing, but also to get a boom underway. Failure will doom an administration to unpopularity and stymie a broader agenda.

The same economic challenges will apply if Mr. Trump is re-elected, though the likely policy approach would be different. In negotiations over pandemic relief spending, the administration has embraced help for businesses, including protecting them from virus-related legal liability. And many Republican senators have opposed a new large-scale stimulus, despite tweets from the president advocating it. His allies have argued that the administration’s strategy of deregulation and low taxes will create a robust recovery as public health concerns ebb.

Jon Lieber, an analyst who tracks American politics for Eurasia Group, projects that a Trump victory and Republican retention of Senate control would result in pandemic-related stimulus of around $600 billion. Democrats are looking at much more, with Mr. Lieber projecting $2.5 trillion to $3.5 trillion in the event of a Biden victory and a Democratic retaking of the Senate.

The scale of that possible fiscal action reflects a consensus among liberal-leaning economists — including those advising Mr. Biden: that the risk of doing too little to get the economy back on a path to prosperity is greater than the potential downside of doing too much.

“We have much better tools for tamping down growth that is too fast than we have the tools to boost an economy that’s too weak,” said Wendy Edelberg, director of the Hamilton Project at the Brookings Institution and a former chief economist at the Congressional Budget Office. “Once our economy gets into a slow-growth, grinding scenario, it is very difficult to change that course.”

At the same time, a sharp drop in interest rates even as budget deficits have risen has led many centrist and left-leaning economists to worry less about debt than they did in the Obama years. And Republican support for a $1.5 trillion tax cut in 2017 and a $2.2 trillion pandemic relief bill this past spring have helped reduce sticker shock over 13-figure cost estimates.

Ms. Edelberg published a paper with Louise Sheiner this month estimating that $2 trillion in fiscal stimulus would bring the economy back to its pre-pandemic growth path by the third quarter of 2021. In the absence of any action, they estimate, it could take as long as a decade.

Mr. Biden has cited his work on the 2009 stimulus bill, boasting of his work to prevent fraud and of the role the recovery act played in supporting state and local governments and clean energy. In discussing his 2021 agenda, he has promised “the kinds of investment that will stimulate the economy” and “to get back to full employment fast and help build back better than before.”

Those who advise him say he is aware of the historical echoes.

“Joe Biden doesn’t want to come into office and sit on a sloggy economy for four, six, eight quarters,” said Jared Bernstein, who advised Mr. Biden during his vice presidency and does so now. “If he gets the chance, I suspect there will be real motivation to do this deeply, effectively and quickly.”

In particular, Mr. Bernstein said, a Biden administration would seek “high-multiplier” policies that funnel money to people and businesses that need it and are likely to spend it, helping funds circulate through the economy quickly to fuel growth. 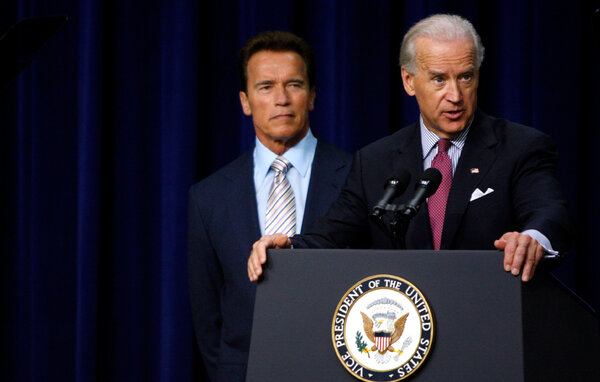 The Obama administration’s miscalculations were both political and economic. The economy was in such free fall over the winter of 2008-9 that estimates of the shortfall in economic activity that fiscal stimulus might seek to replace were constantly behind the curve. A deeply unpopular bank bailout, passed by the Bush administration but implemented by the Obama team, fueled outrage, and many voters conflated the two. Political advisers in the White House believed that if they sought more than $1 trillion in fiscal aid, the political backlash would be so severe as to risk getting nothing.

Both political and economic aides misunderstood some of the ways politics and economics could intersect in a severe recession like that one.

“We absolutely thought that Congress would want to do multiple high-profile rounds of stimulus if the economy was worse than expected,” said Jason Furman, an Obama economic adviser who is now at Harvard. “We thought Congress running for re-election in 2010 would want to be seen doing something to help the economy so they could campaign on it. We didn’t realize how unpopular it was going to be by then.”

Details of a Biden stimulus would depend on what, if any, fiscal action is enacted before January; how the economy evolves between now and then; and the size of any Senate majority Democrats might obtain (if Republicans retain the chamber, a stimulus would be curtailed significantly). Campaigning, Mr. Biden has emphasized relief efforts that would include significant help for green energy, low-income households, and state and local governments. It would probably be similar to the $3 trillion pandemic relief legislation that House Democrats passed in the spring, Biden allies and outside analysts said.

A crucial question for any Biden stimulus would be how Democrats approach legislative strategy in the Senate.

In 2009, the Obama administration secured a 60-vote supermajority in the Senate needed to overcome a Republican filibuster by winning over three Republicans. But that would be an unappealing pathway should Mr. Biden find himself in a similar spot in early 2021.

Even if Democrats were to win the Senate, it would probably be a narrow majority, meaning more Republicans would be needed to get to 60 “yes” votes for stimulus. There are also fewer centrist Republicans today whose votes are likely to be available in 2021.

And the history of 2009 applies. Negotiations with Republicans led to a smaller bill and one with more components that Mr. Obama’s aides viewed as ineffective. The three Republican votes, in other words, displayed little bipartisanship, and diluted the bill’s economic impact.

In 2021, a Democratic Senate would have two options to go it alone. It could use “reconciliation,” a budget process that allows tax and spending legislation to be enacted with a simple majority vote. But this would put strict limits on what the bill could do, ruling out many regulatory or other provisions that the Senate parliamentarian might declare ineligible.

Then there is the option of eliminating the 60-vote filibuster rule, which would open the door for more expansive policymaking on all fronts, but could prove politically unpopular and would have far-reaching consequences for how Congress works.

That’s unlikely to happen right away, said Mr. Lieber, the Eurasia Group analyst and a former adviser to Mitch McConnell, the Senate majority leader: “They need to set up the political argument first that, ‘We tried working with Republicans on the puppy dogs and grandmas act and they filibustered it, and then the ice-cream-for-everyone act and they filibustered that.’”

A central tension for Democrats would be between a focus on policies that get money out the door quickly and can seed a speedy economic rebound, versus those that take place more slowly but can create more lasting change.

To many in the Biden orbit who lived through the toxic politics of the 2009 stimulus, the urgency of doing more than papering over a rough patch in the economy is a particularly vivid lesson.

“There was a mantra in 2009 of stimulus being ‘timely, targeted and temporary,’” said Heather Boushey, president of the Washington Center for Equitable Growth. “That seemed right for the problem we were solving then. This problem feels different because it’s unearthed these really important structural challenges that need to be solved.”