Cuba Is Pulling Doctors From Brazil After ‘Derogatory’ Comments by Bolsonaro

SÃO PAULO — Cuba said Wednesday it was recalling thousands of doctors deployed to poor and remote regions of Brazil after Brazil’s far-right president-elect criticized the communist country’s treatment of the medical professionals.

Cuba started deploying health professionals to Brazil in 2013 as part of the Mais Medicos, or More Doctors, program, started by the leftist Dilma Rousseff when she was president. It provided medical services to communities underserved by Brazil’s public health system.

For residents of many small towns and violent, low-income urban neighborhoods, it was the first time a doctor had taken up residency among them in years, which made the program wildly popular.

While most of the money that Brazil pays for the service goes to the Cuban government, the meager pay the visiting doctors earn is still significantly more than what they make at home.

Jair Bolsonaro had warned that the terms of the deal would change when he took the Brazilian president’s office on Jan. 1, saying that the Cuban government could not retain any part of their salary and that the doctors must be allowed to bring their families, which they are currently not permitted to do.

Mr. Bolsonaro has also raised questions about the quality of the doctors’ training in Cuba and has said the doctors would have to prove their medical credentials by getting their diplomas validated in Brazil.

“The Cubans get approximately 25 percent of the salary. The rest feeds the Cuban dictatorship,” Mr. Bolsonaro told the Correio Braziliense newspaper earlier this month, adding that he met a Cuban doctor who wasn’t allowed to bring her children with her. “Can you maintain diplomatic relations with a country that treats its own like that?”

In response, Cuban authorities told the Pan-American Health Organization — which has helped manage the program — that its doctors have to leave Brazil.

“These unacceptable conditions make it impossible to maintain the presence of Cuban professionals in the program,” the Cuban Health Ministry said on Wednesday, accusing Mr. Bolsonaro of making “derogatory and threatening” comments. 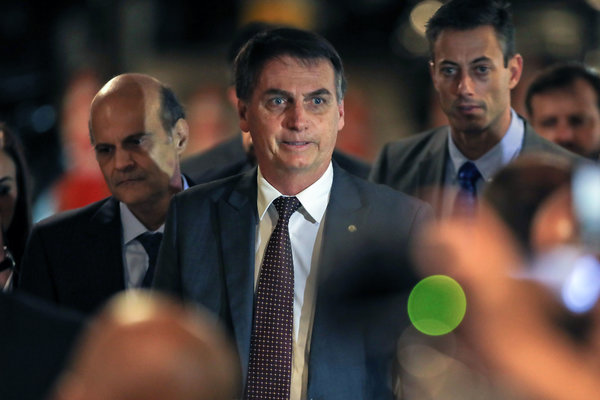 At a news conference on Wednesday, Mr. Bolsonaro described the arrangement with the Cuban doctors as “slave labor,” adding that: “I couldn’t agree to it.”

He also posted a tweet in English accusing the Cuban government of dismissing the impact the decision to pull the doctors would have on Brazilian patients, and wrote that Havana was refusing to “fix the deplorable situation of these doctors in clear violation of human rights.”

More than 8,000 of the 18,000 doctors currently employed by the Mais Medicos program are Cuban, and their sudden departure would have a significant impact on Brazil’s neediest communities. The end of the program would also negatively affect Cuba’s bottom line. The government’s medical service export program is among its main sources of revenue.

According to Cuba’s Health Ministry, nearly 20,000 Cuban doctors have worked in Brazil as part of the program over the last five years, treating more than 113 million patients. Brazilian authorities say more than 60 million Brazilians who did not have access to a doctor now do as a result of Mais Medicos.

Cuba sends doctors to dozens of countries, sometimes to help with humanitarian crises and often as part of medical services contracts. Countries have paid the government millions of dollars every month to provide doctors, effectively making the doctors Cuba’s most valuable export.

But in Brazil, a growing number of the Cuban doctors have rebelled in recent years. Scores have filed lawsuits in Brazilian courts to challenge the arrangement demanding to be treated not as agents of the Cuban state but as independent contractors who should earn full salaries.

Noel Fonseca Gomez and his partner were the only doctors for miles when they arrived in Arari, in northern Brazil in 2014.

“The work is gratifying, but I had to leave my children behind,” the Cuban doctor said. “And then you find out what Brazilian doctors are earning. When I started to fight for my rights, the Cuban government threw me out of the program.”

Mr. Fonseca was eventually able to move his family to Brazil and they have made it their permanent home.

Cuba has punished those who have defected by barring them from returning to the island for eight years.

“I think most of the Mais Medicos doctors will go back to Cuba,” Mr. Fonseca said. “Their families are there and they won’t risk being barred from visiting them.”