AUSTIN, Texas — It was a literal exit strategy: Texas Democrats staged a last-minute walkout on Sunday to kill an elections bill that would have restricted voting statewide. The quorum-breaking move — a decades-old maneuver favored by Democratic lawmakers — worked, in dramatic fashion.

But by Tuesday, the reality of their short-lived triumph had settled in. The bill was very much still alive, with the Republican governor vowing to call lawmakers back to Austin for a special session to revive and pass the measure. It was a top legislative priority for the Republican Party, and would have been the final achievement in the ultraconservative session that concluded on Monday.

On Tuesday, Democrats staggered out of the session that included passage of a number of other aggressive measures, including a near-ban on abortion and a bill allowing the carrying of handguns without permits. And Republicans, who seven months ago staved off a high-profile, top-dollar campaign by Democrats to flip the State House for the first time in nearly two decades, applauded themselves for a series of conservative victories.

“Elections have consequences,” said State Representative Craig Goldman, who represents part of Fort Worth and is the treasurer of the House Republican Caucus. Of the Democrats, he said, “They spent over $50 million trying to gain control of the Texas State House and they didn’t do it.”

Indeed, this was the session that pushed the state further right, at a time when it seemed least likely to do so — as Texas becomes younger, less white and less Republican, and as it continues to reel from the twin crises of the coronavirus pandemic and the collapse of its power grid during a winter storm that killed more than 150 people statewide.

Like a lot of statehouses, the Texas Capitol is filled with part-time lawmakers. Its members are paid a salary of $7,200 and earn a living elsewhere. One of the authors of the gun bill owns an East Texas insurance agency, and another is an orthopedic surgeon. A writer of a measure that sought to ban transgender students from playing on sports teams based on their gender identity is a certified public accountant. One of the lawmakers who helped draft legislation to financially punish large cities if they cut their police budgets is a banker.

On a recent afternoon beneath the salmon-colored dome of the Texas Capitol, a lobbyist chatted in the halls with a sales representative for a drilling fluids company. That sales rep was State Representative Tom Craddick, who served years ago as the first Republican speaker of the Texas House since Reconstruction.

In recent decades, Mr. Craddick and his fellow conservatives have consistently put their stamp on the biennial legislative sessions in Austin that begin in January and end in May. They gained national attention in recent sessions for banning sanctuary cities and requiring voter ID, among other measures.

But the tenor, the players, the combativeness and the times have changed.

This became one of the most conservative sessions in recent memory, with bills that had died in previous sessions for being too extreme now viewed as middle-of-the-road in the post-Trump era. Last month, in the span of a feverish few days, lawmakers passed the bill banning abortion after six weeks of pregnancy, when many women are not even aware they are pregnant, after a similar bill died in the 2019 session. And they approved the bill to do away with the state’s handgun permit and training system, after similar efforts failed to gain momentum in past years. 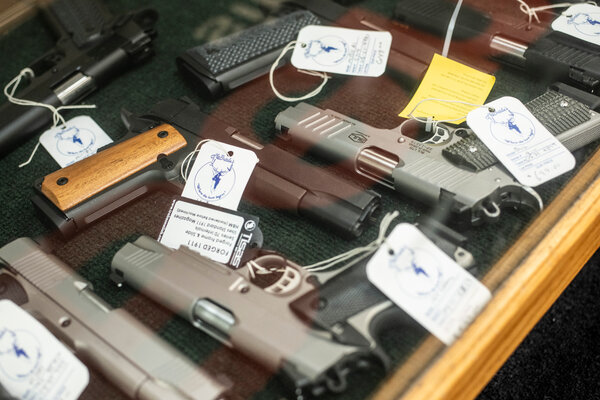 Another factor has been the disappearance of the moderate Republican guardrails.

In past legislative sessions, Bush-style Republicans, including the former speaker of the House, Joe Straus of San Antonio, blocked many bills put forth by the far right, including killing a so-called bathroom bill in 2017 that would have restricted which bathroom transgender people can use in public buildings and schools. Mr. Straus and many of his moderate allies are gone now from the Legislature, replaced in large part by pro-Trump Republicans who have taken to criticizing Gov. Greg Abbott for not being conservative enough.

The state’s Republican leadership thrived in the Obama era, in much the same way that California’s Democratic leadership relished being the liberal antidote in the Trump era. Now Texas Republicans are playing the antagonist once again during the Biden administration, all while intraparty skirmishes have broken out and far-right grass-roots activists prepare for next year’s Republican primaries.

“They’re flexing their muscle going into the 2022 primaries, so they’re all looking over their right shoulders and I think that’s driving a lot of this,” said State Representative Chris Turner, who is the chairman of the House Democratic Caucus. “They certainly are pushing the envelope in a way they haven’t before.”

Republican lawmakers, including Mr. Goldman, deny that any of their work this session was payback against the Democrats for a hard-fought election last year. They said they were given a mandate by Texas voters.

“When the people of Texas see that onslaught of dollars and a lot of negative campaigns and they aren’t persuaded to ditch their Republican representative for a Democrat, it tells Republicans that people are embracing their point of view,” said State Representative Jim Murphy, chairman of the House Republican Caucus.

State Representative Jarvis D. Johnson, a Democrat from Houston, said this had been a particularly partisan session. He cited but one example: the dismissive Republican response to his efforts to abolish Confederate Heroes Day, an official state holiday in Texas.

“Last session I was able to get a committee hearing on this,” Mr. Johnson said. “That’s something I could not even get this year.”

Mr. Johnson had a heated exchange on the House floor with a Republican lawmaker over the role of slavery in the Texas Revolution, one of many confrontations and arguments between Democratic and Republican legislators.

“As long as you’re a white, Christian evangelical, gun-loving, Bible-toting, race-baiting person, hell yeah, Texas is for you,” Mr. Johnson, who is Black, said in an interview. “They got all kinds of freedoms for them. Believe me, I’d like to tell you that I’ve got a lot of friends on the other side of the aisle. But I can’t lie to you like that.”

In Texas, it has long been the case that Democrats can only stall legislation. It is nearly impossible for them to push forward bills in tune with their vision of a more progressive state.

Recently, the beleaguered party saw one way out of the transgender sports bill: Keep talking past the deadline to pass it. And so the Democratic lawmakers did. After the clock struck midnight, they cheered and transgender activists waved flags in the chamber.

They also used last-minute stalling tactics to successfully kill two other bills in the House that had been priorities for Lt. Gov. Dan Patrick, the presiding officer in the Senate who later criticized his Republican colleagues in the House for not working hard enough.

Recently, when the speaker of the House, State Representative Dade Phelan, was stopped at an entrance to the Senate because he lacked a required wristband showing he had a negative coronavirus test, it started an intraparty debate over whether he was denied entry to the chamber. The incident only heightened the perception that the two Republican-led chambers that Democrats accused of advancing such a divisive conservative agenda were themselves divided.

“There’s always some level of factions just because we’re like any family,” said Mr. Murphy, the Republican caucus chairman. “There’s the ones that have cheese pizza and those who want pepperoni. But we’re all going to sit down for dinner.”

It has been decades since Molly Ivins, a sharp-witted liberal writer known for mocking the political status quo, famously called the Legislature “the finest free entertainment in Texas.” A freewheeling, folksy history has defined the institution since the first session in 1846, a remarkable feat considering how infrequently it meets — typically once every two years for 140 days.

In 1979, in a move not unlike what the Democrats pulled off this weekend, a dozen Democratic senators known as the Killer Bees hid offsite to prevent the Senate from reaching a quorum on election legislation. State troopers were dispatched to round them up. Officers thought they nabbed State Senator Gene Jones but discovered, after flying him to Austin in a helicopter, that they instead had his brother Clayton. When Clayton Jones was asked why he went along with the mix-up, he said he had never been in a helicopter before.

Decades ago, during one of his epic filibusters — in which lawmakers have to keep speaking except when allies ask questions and not leave the floor even for restroom breaks — State Senator A.R. Schwartz, known as Babe, was surrounded by his Democratic colleagues in a corner during a long question. He urinated into a wastebasket. His allies then cleared out, taking the wastebasket with them.

Molly Ivins-style moments of levity still occur, though not as frequently.

During a recent discussion over a measure that would restrict the breeding of unlicensed dogs and cats, pet banter and chuckles flowed. The bill’s sponsor, State Senator José Menéndez, a San Antonio Democrat, called the moment bittersweet, and fleeting.

“It was one of the few light moments we’ve had,” Mr. Menéndez said. “Everything else has been very contested, heated culture wars.”