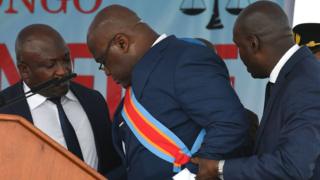 In our series of letters from African writers, Ghanaian journalist Elizabeth Ohene reflects on the dangers of a bullet-proof vest.

Events in Kinshasa a week ago brought the memories flooding back. The newly minted president of the Democratic Republic of Congo, Felix Tshisekedi, had to stop mid-way through his inauguration speech because he felt faint.

An aide explained that his bullet-proof vest was too tight.

There was a time in my life when I used to wear bullet-proof vests. Put like that, it sounds quite dramatic.

But unlike President Tshisekedi’s armour, mine was not worn discreetly underneath the clothes.

What I had was a BBC-issue functional bullet-proof vest, which was worn ostentatiously over my clothes.

Watching the presidential inauguration on television, it did occur to me when the ceremony started that Mr Tshisekedi’s suit was not at all the type of sharp suit that one would expect on such an occasion. I thought I was being unkind when I whispered to myself that his suit was ill-fitting.

But let me go back to my bullet-proof vest days.

Before we were given the vests, there had been a lot of anguished discussions about whether BBC reporters should be seen to be wearing body armour.

This was South Africa in the early 1990s and most of what I was covering was news about killings, shootings and bomb explosions.

With that in mind it was agreed that it was sensible for us to wear the vests.

But I was reluctant to don the heavy gear. I remember I was always getting into a lot of trouble with my colleagues when we would be caught up in incidents and I would invariably be without my bullet-proof vest.

The trouble was I hated it. It weighed a tonne and I always felt wearing the vest was inviting attention.

Plus, up until then I had never imagined that I would be the sort of person who would need to wear one of those things.

In my mind, a bullet-proof vest was permanently linked with something worn by petty dictators.

They were too proud to let anyone know that they were wearing a protective shell, and their suits were therefore made to accommodate a vest without making it obvious that there was something underneath.

Indeed, at any public appearance of a head of state it was part of the conversation to speculate on whether the leader was wearing body armour. But it was very rare for the truth to be revealed.

When Kwame Nkrumah, Ghana’s first president, started wearing those suits after someone tried to assassinate him in the grounds of his office, the gossip was that he wore a bullet-proof vest under his suit. At the time this was always said in whispers and it was never acknowledged or denied.

At the time, I felt that if he was wearing a bullet-proof vest, it confirmed to me he was a dictator.

In later life, it did dawn on me that a leader need not be a dictator or tyrant to attract the attention of would-be murderers, and leaders of all stripes needed to be protected.

This meant that I changed my attitude and became tolerant towards the security people who surround presidents.

However my attitude towards bullet-proof vests never changed.

There are certain clothes that do not lend themselves to the vests.

Take the Ghanaian kente for example. When worn by our males, it invariably means exposing one shoulder and part of your chest and there is no chance you can put one of those vests underneath a kente cloth.

Many other traditional styles simply do not have room for anything extra.

If you are to don a hidden bullet-proof vest therefore, the only option is to wear a Western-style suit, often ill-fitting, to be able to accommodate it.

Spare a thought then for President Tshisekedi, there he is at his inauguration as president after being declared winner of an election that many thought he had lost.

He is hoping that he can wear a bullet-proof vest discreetly and travels to the function.

He is almost done in, not by an assassin’s bullet, but by a tight vest that threatens to cut off his air supply.

If he felt that unsafe, he probably should have worn one of those BBC-issue vests on top of his suit. Heavy yes, but not so tight that it would have made him breathless and almost faint on his big day.

Unfortunately, I suspect fashion considerations would rule that out.