Peel regional police say a woman has been transported to a trauma centre following what is believed to be a hit-and-run in Mississauga.

Authorities said they received a call for reports of a woman lying in the road in the area of Meadowpine and Meadowvale boulevards around 8 p.m.

When they arrived on scene, officers located an elderly woman suffering from life-threatening injuries.

Police said that based on her injuries, they believed she was hit by a vehicle that fled the scene.

The woman was transported to hospital, where she remains in life-threatening condition.

Roads are closed in the area as police investigate.

The collision was one of multiple cases in which pedestrians were struck by vehicles in the Greater Toronto Area on Friday evening and suffered serious injuries.

In Brampton, police were called to James Potter Road and Borrelli Drive just after 6 p.m. for reports that a pedestrian was struck.

A woman was transported to hospital from that scene in life-threatening condition.

About 25 minutes later, Toronto police were called to a collision at McCowan Road and Sandhurst Circle.

A woman was transported to hospital from that scene with serious but non-life-threatening injuries.

In those cases, the drivers remained at the scene.

Toronto police investigating after a woman was seriously injured after being hit by a vehicle outside of a grocery store near McCowan Road and Sandhurst Circle. It was one of multiple cases of pedestrians being hit by vehicles Friday evening. 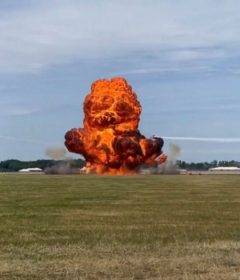