Who will succeed Angela Merkel? Race could bring surprises

New York: German Chancellor Angela Merkel is officially on the way out, and either in 2020 or 2021 somebody else will step into her job. It'll almost certainly be somebody from her conservative bloc, which remains the strongest in the polls. But who? Last December, this seemed an easy question to answer. Now the race has opened up again.

It will accelerate this week when – 14 years to the day since Merkel took office – delegates of her party, the Christian Democratic Union, gather for their annual powwow. Four of five potential successors are Christian Democrats and will use the stage in Leipzig to audition. Two weeks later, Merkel's junior partners, the Social Democrats, will decide whether to quit the coalition early, thereby determining the timing of the next national election. 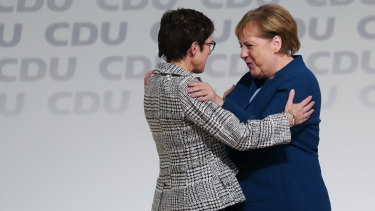 Merkel's original plan was to groom a former regional premier, Annegret Kramp-Karrenbauer, commonly abbreviated to AKK. She seemed reassuringly similar. Both women are quietly, but profoundly, religious. Both are non-ideological centrists. Both are de-escalators by temperament and speak in complicated phrases that often mean nothing, but come across as soothing.

The grooming had to be accelerated last year, because the CDU got restless. Merkel gave up the party leadership so that Kramp-Karrenbauer could seize it, which she did, after a bruising contest. To Merkel's chagrin, AKK then stumbled through a series of gaffes. Most were blown out of proportion, but stuck. During this year's carnival celebrations, when Germans uncharacteristically revel in buffoonery, she dressed up as a cleaning lady and waded into gender politics by wondering tongue-in-cheek whether men were still allowed to pee standing up. German society feigned collective outrage. She was damaged goods.

Then the job of defence minister unexpectedly opened and Merkel gave it to AKK before a rival could pounce on the opportunity. But on the international stage Kramp-Karrenbauer, whose English is clumsy, looked even more out of depth. And yet she embraced the role, courageously broaching taboos along the way. She suggested creating a German-led security zone in Syria, as well as providing more money to the army (which NATO has been demanding for years). On the whole, she's come across as thoughtful and honest. That hasn't helped her as a candidate. The German public and elite have concluded she can't win.

One man who thinks he can is Friedrich Merz. He was an up-and-coming Christian Democrat in the 1990s until Merkel ousted him from a top job in 2002. He's been plotting his revenge ever since. For years he did that outside of politics, working in finance for BlackRock Inc, among others. But last year Merz, now 64, came back, colluding with the CDU's right wing to challenge Merkel and AKK for leadership of the party. 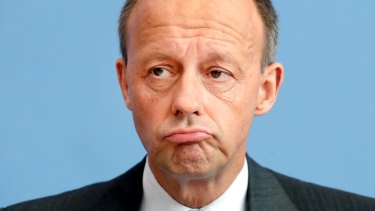 His unique advantage is that he has no political responsibility, so he can snipe from the sidelines. He's not subtle about it. After the CDU lost a regional election, he lamented that Merkel and Kramp-Karrenbauer "smother this country like a blanket of fog". Many in the CDU project conservative fantasies onto Merz, especially the party's older, male contingent. But to the broader German electorate, he's fallen out of the zeitgeist.

A candidate who could one day capture it is Jens Spahn. Like Merz, he's positioned himself as a conservative gadfly to the wobbly centrism of Merkel and Kramp-Karrenbauer. But because he's 39 and openly gay, Spahn can appear simultaneously conservative and woke. 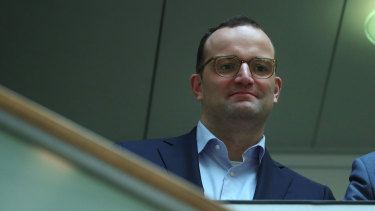 Sensing the political threat, Merkel tried to eliminate Spahn by making him health minister, a boring job in which normal people fail. Surprisingly, however, Spahn is blossoming. He's launching one initiative after another. This month he made measles vaccination mandatory, no small feat in a culture of anti-vaxxers. But as Spahn and most Christian Democrats know, his time hasn't come yet.

Then there's Armin Laschet. His advantage is that he's premier of the most populous state, North Rhine-Westphalia, and leader of the CDU's biggest delegation. His strategy is to be bland and pleasant, to repeat platitudes on TV, and to wait for the other contestants to eliminate one another until the party begs him to make peace. But that's unlikely. German voters wouldn't send somebody this wimpy to face off against the likes of Donald Trump, Vladimir Putin, Xi Jinping or Emmanuel Macron. 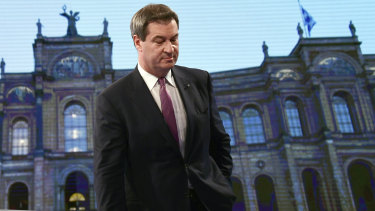 Bavarian governor Markus Soeder is the one to watch as potential replacement for German Chancellor Angela Merkel.Credit:AP

Politically, Soeder, 52, is an opportunist and populist, but the kind who stops short of saying mean things about foreigners. As is required of CSU politicians, he dons lederhosen and campaigns in beer tents, hewing close to ordinary folk. Even though he and his party love cars with big combustion engines (Audi is Bavarian), Soeder has recently discovered a passion for the environment, especially insects. That was around the time Bavarians surprised the nation with a grassroots ballot measure to protect bees.

Soeder's sudden greening probably has another reason. He knows that to become chancellor, he'll have to form a coalition with the Greens, who have soared in the polls to become the largest center-left party. For now Soeder keeps ranting against them, but he'll eventually cozy up to the environmental party easily.

At the CDU gathering in Leipzig, Soeder has a speaking slot on Saturday. He knows that, for now, he must show benevolent concern for the turmoil in his sister party. He will appeal selflessly to unity and profess personal ambitions purely – purely, you understand – to make Bavaria prosper. Soeder is the one to watch.

Andreas Kluth is a member of Bloomberg's editorial board.