The Met Desk map shows parts of Italy, France, Germany and Spain covered in up to 50cm of snow the second week of February. Parts of the Balkans will also see heavy snow showers as well as eastern European countries such as Poland, Ukraine and Lithuania. The severe weather conditions will begin hitting parts of Italy from next week and will spread across the continent almost completely by the end of the following week.

The latest BBC Weather forecast has also predicted “significant snowfall” to submerge parts of Europe in the next few days, as a freezing weather front sweeps in.

The forecast showed that France, Spain and parts of Scandinavia were most at risk of snowfall and plummeting temperatures. BBC meteorologist Phil Avery warned that there were “signs that a big chance in on its way”.

He predicted metres of snow could fall across Scandinavia and the regions surrounding the Alps.

Avery said: “We have weather fronts moving across the British Isles on Monday. 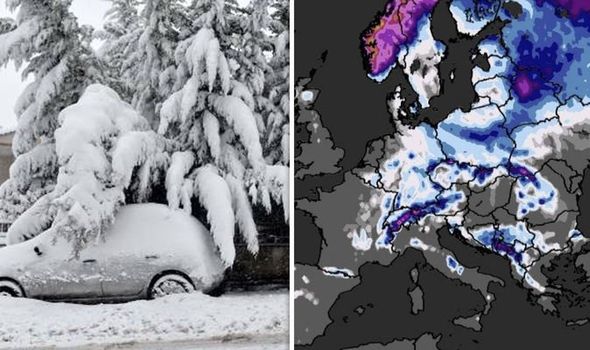 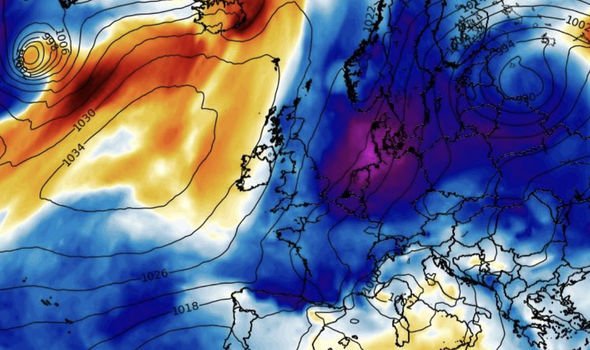 “They will sweep their way into Norway and then south into the heart of France and then into the north-west of Iberia.

“Across Western Europe, there will be a lot more in the way of cloud, wind and rain than we have seen for a while.”

He continued: “It is still unseasonably mild in areas of Scandinavia and the Nordic countries.

“But there will still be significant snowfall to come for northern Norway and northern Sweden.

“You could see a metre, a metre and a half, of snow there.

“There will be significant snowfall too in the central and western parts of the Alps.”

In the UK, Met Office has issued a yellow warning for snow and ice in northern Scotland that will last until midnight tomorrow.

Some of the areas affected include Inverness, Tobermory and Fort William. The Met Office also warned of travel chaos and potential injuries due to the wintry weather.

The forecaster said to expect: “Some roads and railways affected with longer journey times by road, bus and train services.

“Some injuries from slips and falls on icy surfaces.

“Icy patches on some untreated roads, pavements and cycle paths.”

Snow maps from Net Weather, which uses a global forecast system to generate its predictions, also show widespread swirling lines of red, green and yellow sweeping over the UK from the Arctic tonight. 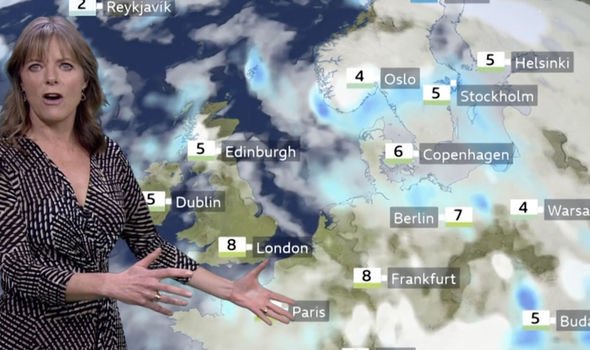 The maps also show there will be at least 7cm of snow and temperatures as low as -2C.

Net Weather forecaster Jo Farrow said: “Many areas are well down in single figures this morning with Ice warnings for northern Britain and Northern Ireland.

“Southeast England starts Monday with around 7C with more cloud and rain showers.

“Further north and west there are large clusters of showers moving in from the Atlantic.

“These are a mixture of rain and sleet and through the day there will be hail and hill snow.