Police in Southern California said an ‘unruly’ crowd of at least 2,500 teens hurled fireworks, bottles, and rocks at officers in Huntington Beach as a party promoted on TikTok descended into chaos and vandalism.

Law enforcement officials declared an unlawful assembly and arrested about 150 people after they refused orders to disperse.

The massive gathering began with a now-deleted video posted on the popular social media app from a user named adrian.lopez517, who invited anyone to his birthday party by Huntington Beach’s fire pits Saturday night, the Orange County Register reported Sunday.

The hashtag ‘AdriansKickBack’ received more than 234 million views on TikTok. 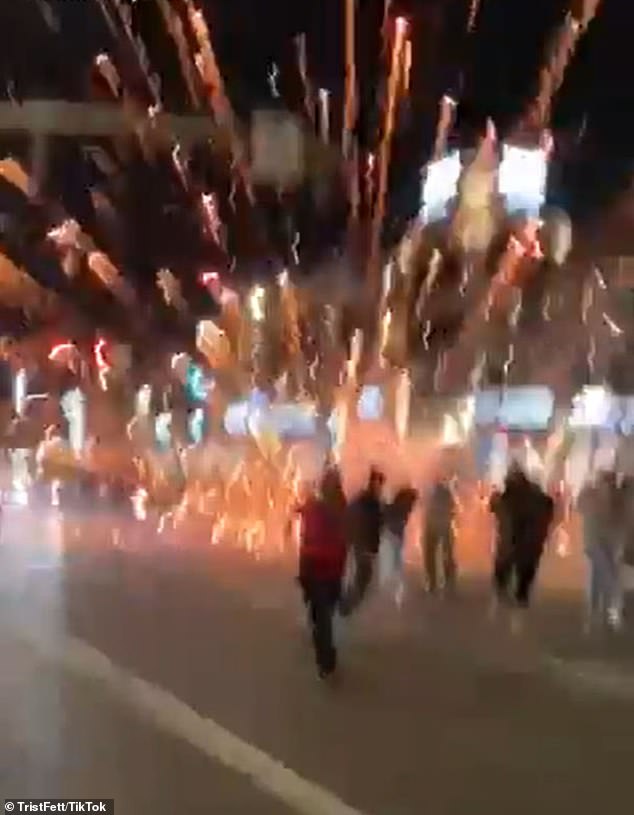 The image above shows partygoers in Huntington Beach, California setting off fireworks on Saturday during what police called an ‘unlawful assembly’ 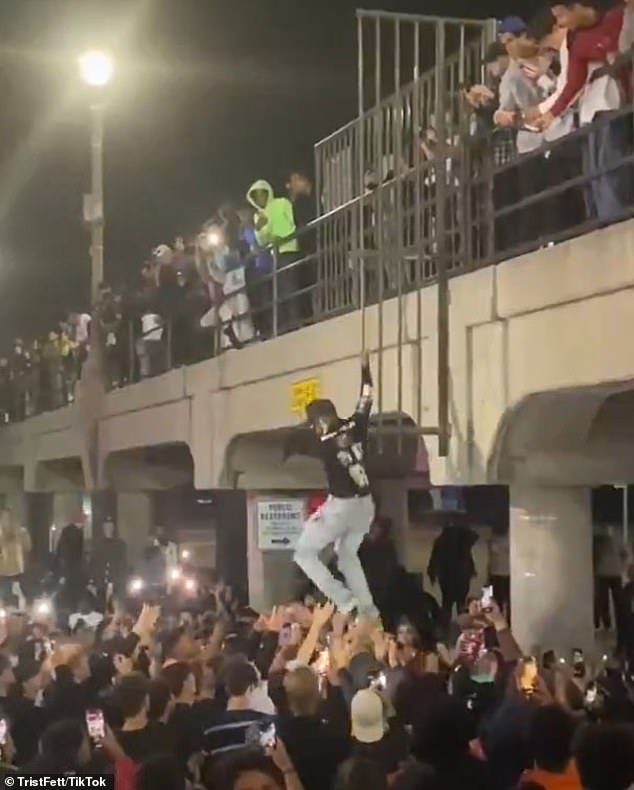 A massive crowd is seen above watching as one person climbs down a metal railing in Huntington Beach, California on Saturday 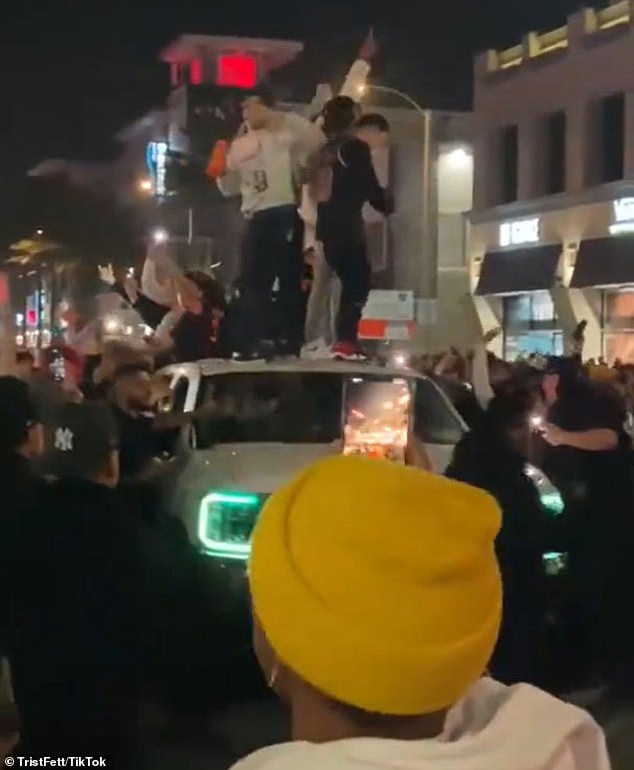 At least 400 people showed up as early as Friday evening around a lifeguard tower, police Lt. Brian Smith said.

When people in the crowd began to launch fireworks near the fire pits, he said, officers declared an unlawful assembly and the partygoers scattered. 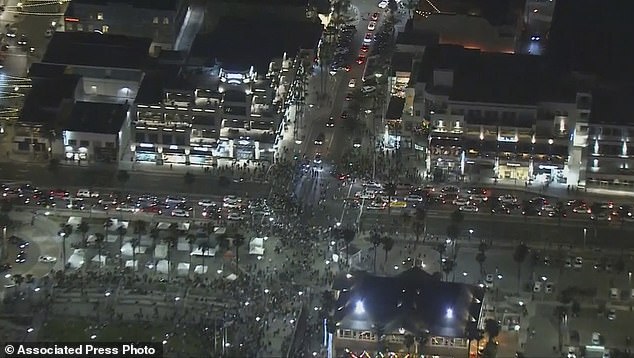 This aerial screenshot from Saturday provided by FOX 11 KTTV shows people gathered at the Huntington Beach pier in Huntington Beach, California. Police in Huntington Beach estimate that at least 2,500 people gathered by the fire pits on the sand Saturday night. A birthday party invitation that went viral on TikTok brought hundreds of people to a raucous celebration on a Southern California beach, prompting police to declare an unlawful assembly and arrest about 150 people after they refused orders to disperse 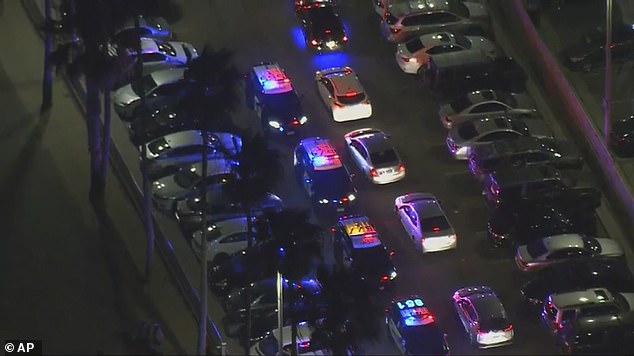 A row of police cars are seen above in Huntington Beach, California on Saturday night 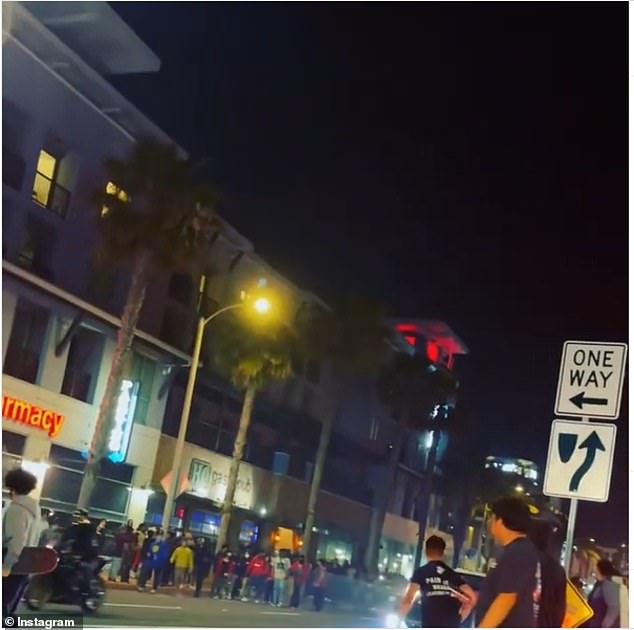 Huntington Beach’s police department posted on Twitter the next day that they were preparing for a surge of visitors due to the promoted party and warned that they will enforce local rules, including no alcohol or drug use on the beach and no fireworks.

However, an even larger crowd showed up Saturday evening. 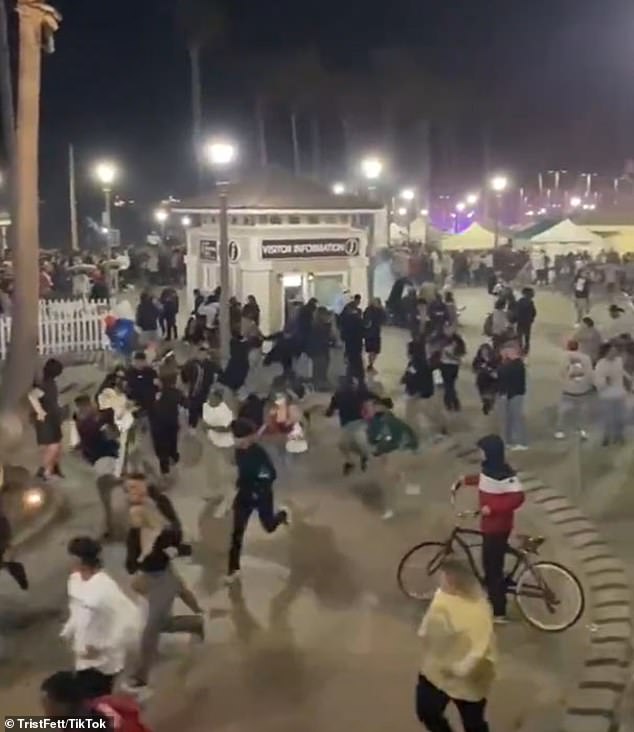 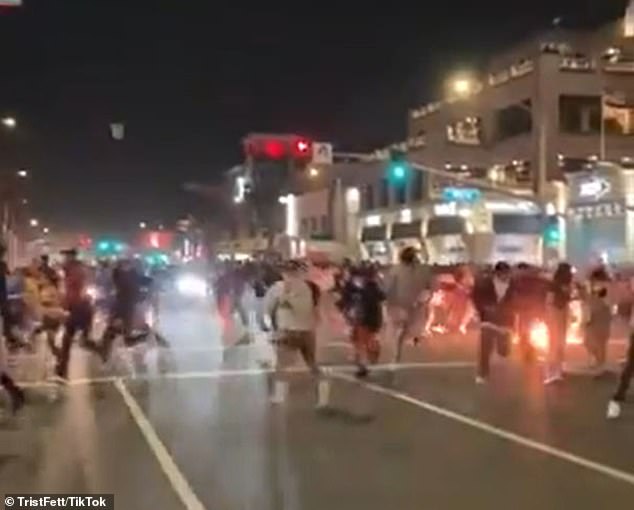 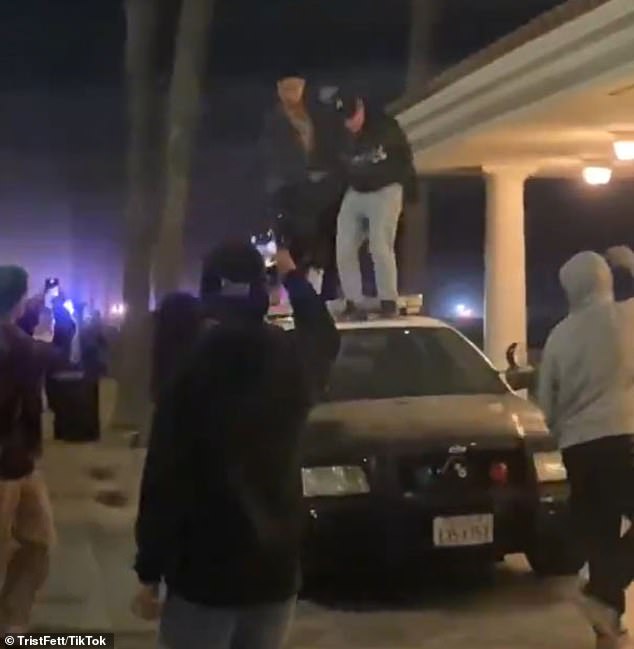 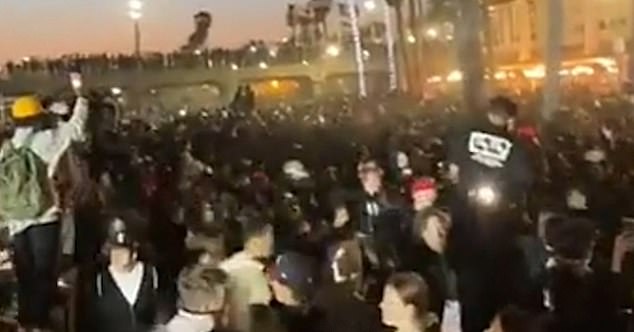 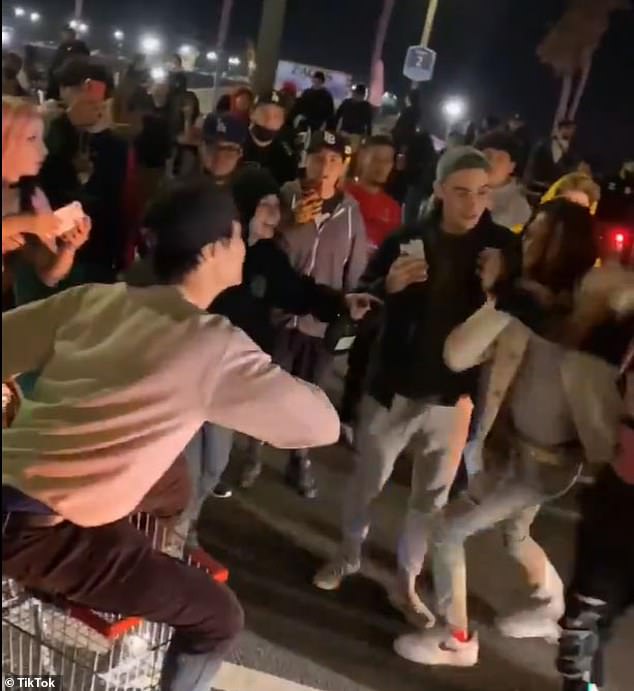 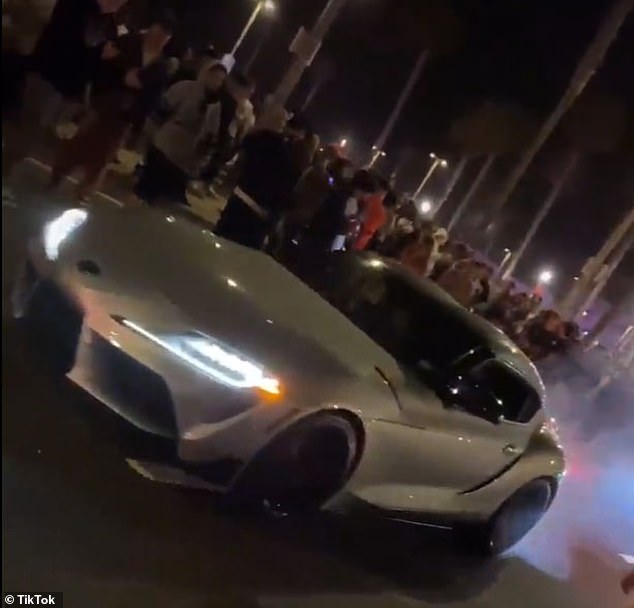 Authorities declared a 5:30am curfew after the gathering grew violent late on Saturday night

Police estimated that at least 2,500 people gathered at the beach before moving to the downtown area.

‘The initial crowd at the beach grew in size and moved to the downtown area where it was estimated to be over 2,500,’ the Huntington Beach Police Department said in a statement. 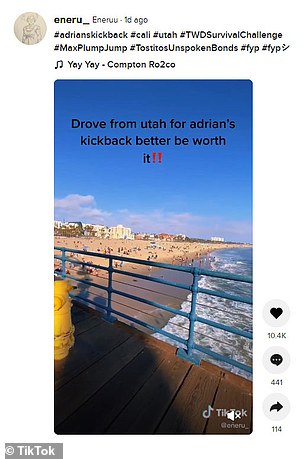 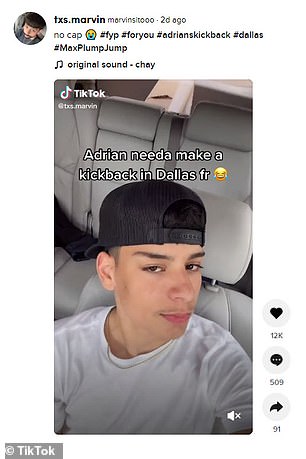 Partygoers came from as far as Utah (left) and Dallas, Texas (right) to take part in the festivities on Saturday 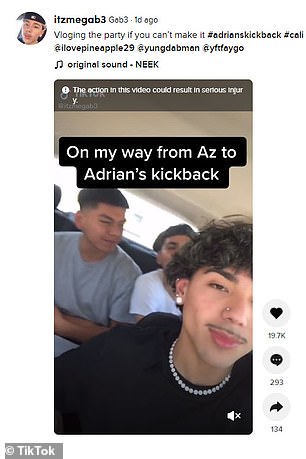 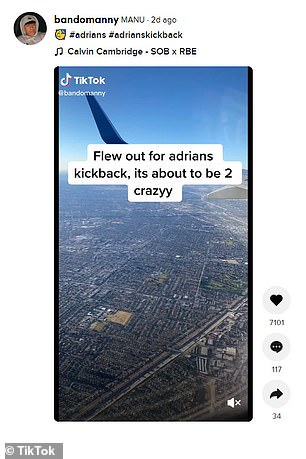 ‘As the crowd size continued to grow rapidly, large groups disbursed into various locations throughout the area, throwing bottles, rocks, fireworks, and other items at officers.

‘At that time, the HBPD requested assistance from outside agencies.

‘Throughout the course of the evening, over 150 officers from virtually all agencies within Orange County were deployed to Huntington Beach based on the pre-arranged request for assistance.’

Officers again ordered the crowd to disperse and issued an overnight curfew after partygoers began to climb atop a lifeguard tower and shot more fireworks, police said. 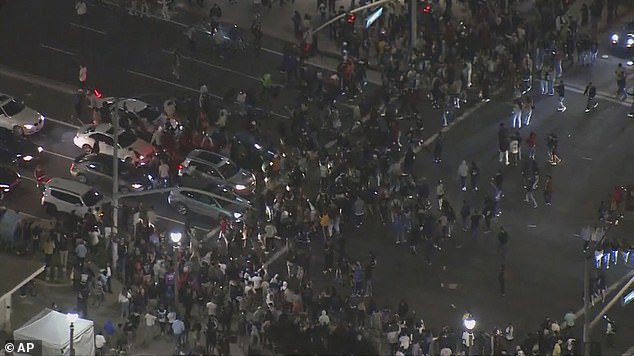 Local police reported that businesses, cop cars, and a lifeguard tower were vandalized by the teens 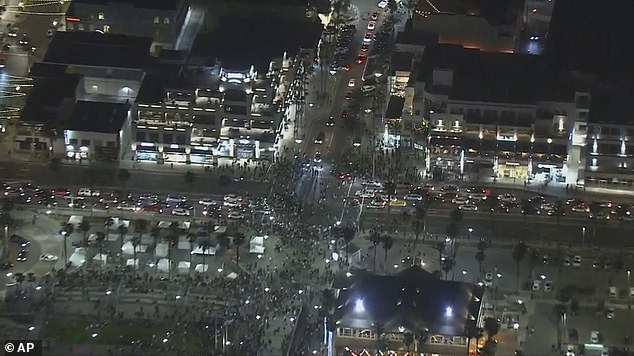 Police said 121 adults and 28 juveniles were arrested and booked on various charges including vandalism, setting off illegal fireworks, failing to disperse, and violating curfew

Video footage from the scene shows officers dressed in riot helmets shutting streets to control the crowd and, in some instances, firing less-lethal rounds.

A number of downtown businesses, police vehicles and a lifeguard tower were damaged, but no significant injuries were reported, she said.

Huntington Beach, which connects a vibrant business district to an 8-mile stretch of sand, has been the site of large gatherings in the last year as pandemic-related restrictions, the 2020 presidential election and the Black Lives Matter movement drew protesters who sometimes clashed with police in the downtown area.