Mr Guaido’s car was ambushed by an angry mob on the streets of Caracas. In the short clip, published by a local television channel, shows the vehicle being rushed as it waited for a traffic light. One man aggressively grabs the car door and pulls, attempting to enter – the door was locked.

Then a group assembled on the pavement start hurling projectiles at the car windows.

As the car screeches away, a cloud of smoke can be seen.

Although the attackers have yet to be identified, US Secretary of State Mike Pompeo quickly released a statement blaming President Nicolas Maduro. 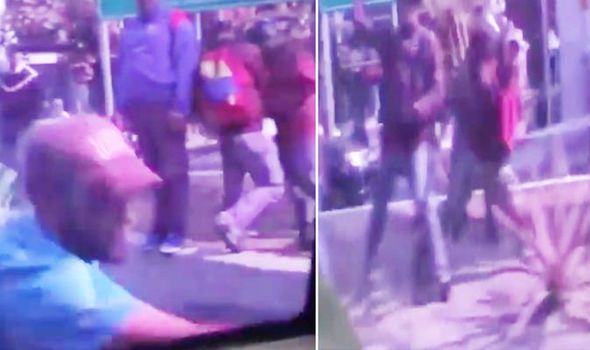 His claim was backed by most western nations, but opposed by Russia and China, who continue to endorse the socialist regime of President Maduro.

But Mr Maduro says Mr Guaido is a U.S. puppet attempting to lead a coup against him and has blamed worsening economic difficulties on sanctions imposed by Washington.

Venezuela’s government told workers and school children to stay home on Tuesday as the second major blackout this month left the streets of Caracas mostly empty and residents wondering how long power would be out amid a deepening economic crisis.

President Nicolas Maduro’s Socialist government, which had blamed sabotage by the United States and the opposition for the previous power cut, said an “attack” on its electrical system caused the blackout that first hit on Monday. The outage shuttered businesses, paralyzed the country’s main oil export terminal, and stranded commuters.

Intermittent service has long affected Venezuela’s largely rural interior, but residents of Caracas fear the increasing blackouts in the capital mean that unreliable power is becoming the new normal for them, too.

“I hope that now with these blackouts in Caracas they can do something, that everyone reacts,” said Maria Melendez, a seamstress in the western city of Punto Fijo who said she has had to replace damaged appliances during previous blackouts.

The blackout came amid tensions with the United States over the weekend arrival of Russian military planes, which led Washington to accuse Moscow of “reckless escalation” of the country’s political crisis.

The United States believes the planes were carrying “cybersecurity personnel,” a U.S. official told Reuters on Tuesday. That would suggest part of their mission could be helping Maduro’s loyalists with surveillance and protecting the government’s cyber infrastructure.