THE UK has passed the four Covid tests needed for the third national lockdown to ease, Professor Chris Whitty has revealed.

Advisers had previously said that infections, vaccinations, hospital rates and deaths would all have to be at certain levels before we could think about further lifting restrictions.

🔵 Read our coronavirus live blog for the latest updates 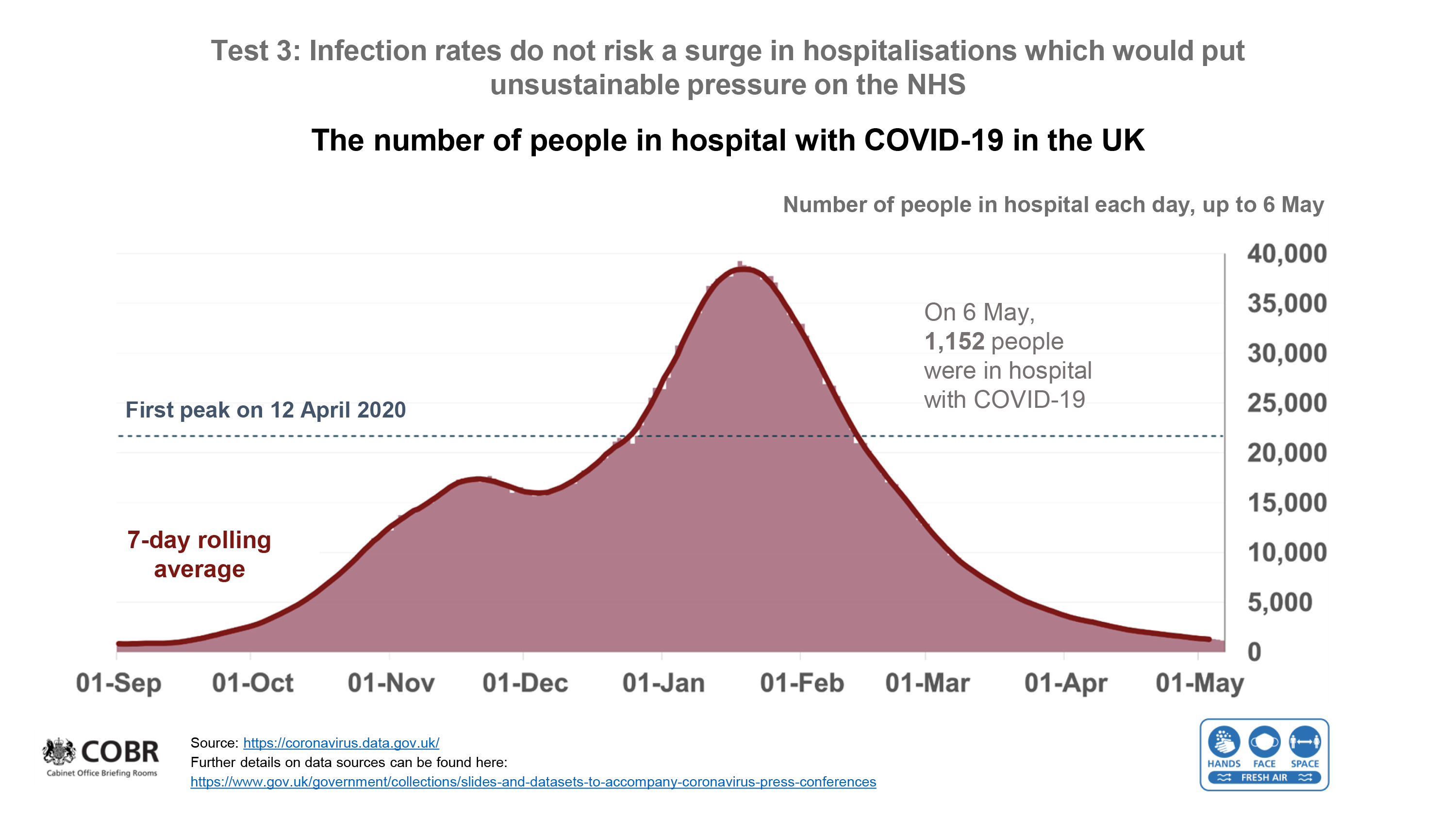 In England, from May 17 the next step of the roadmap out of lockdown will be eased, Prime Minister Boris Johnson confirmed this evening.

Hotels, concert halls and sports stadiums will be unlocked with capacity constraints on some venues.

The PM said we shouldn't be "throwing caution to the wind" when it comes to close contacts.

One of the key tests, the third test that needed to be met was a fall in infection rates – this was so that the NHS would not face a crippling third wave of the virus.

Prof Whitty said: "A further surge in hospitalisations would put unsustainable pressure on the NHS.

"The view of all chief medical officers for England, Scotland, Wales and Northern Ireland and of the medical director of the NHS, based on advice from JVC is not only that rates in hospitals are very low, but that we do not think there is a likelihood in this next period that there will be a significant pressure on the NHS."

He did however add that an increase in transmission should be assumed as a result of the opening up that will occur on May 17. 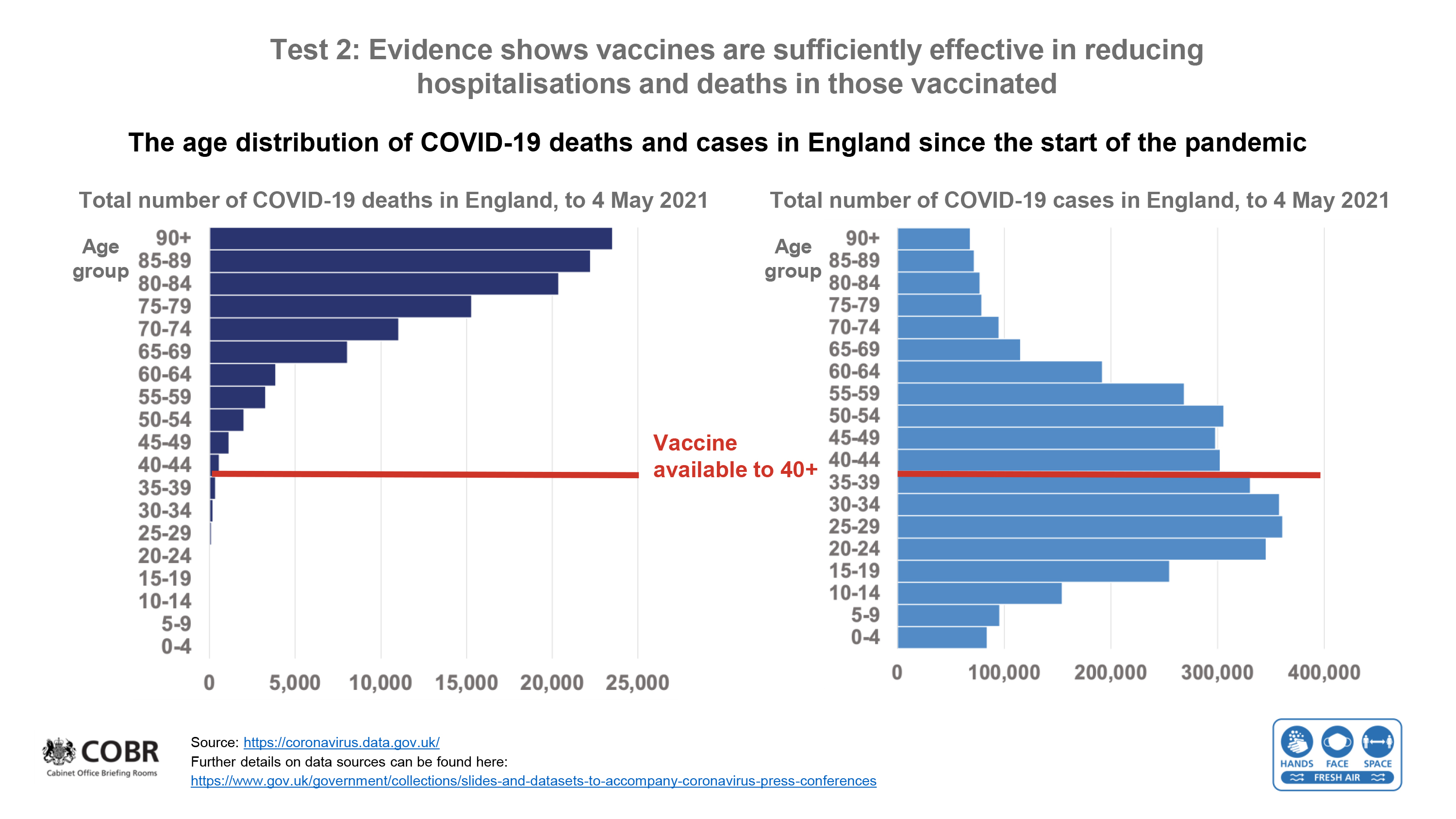 Infection rates are now at their lowest levels since September, and hospital admissions continue to go down.

The vaccine rollout continues to go well, with all adults on track for a first dose by July.

And fresh studies show they are helping reduce hospitalisations, cases and deaths, reducing risk of another wave of the virus.

Those who are vaccinated have a 55 to 70 per cent reduction in getting symptoms of the disease, according to the latest data.

And they have up to 85 per cent less chance of going into hospital too.

Prof Whitty explained the data behind the latest easing of restrictions.

He said the first test had been the vaccine rollout and so far in the UK 35.4 million people have had a first dose of a vaccine with 17.8 million also having had a second. 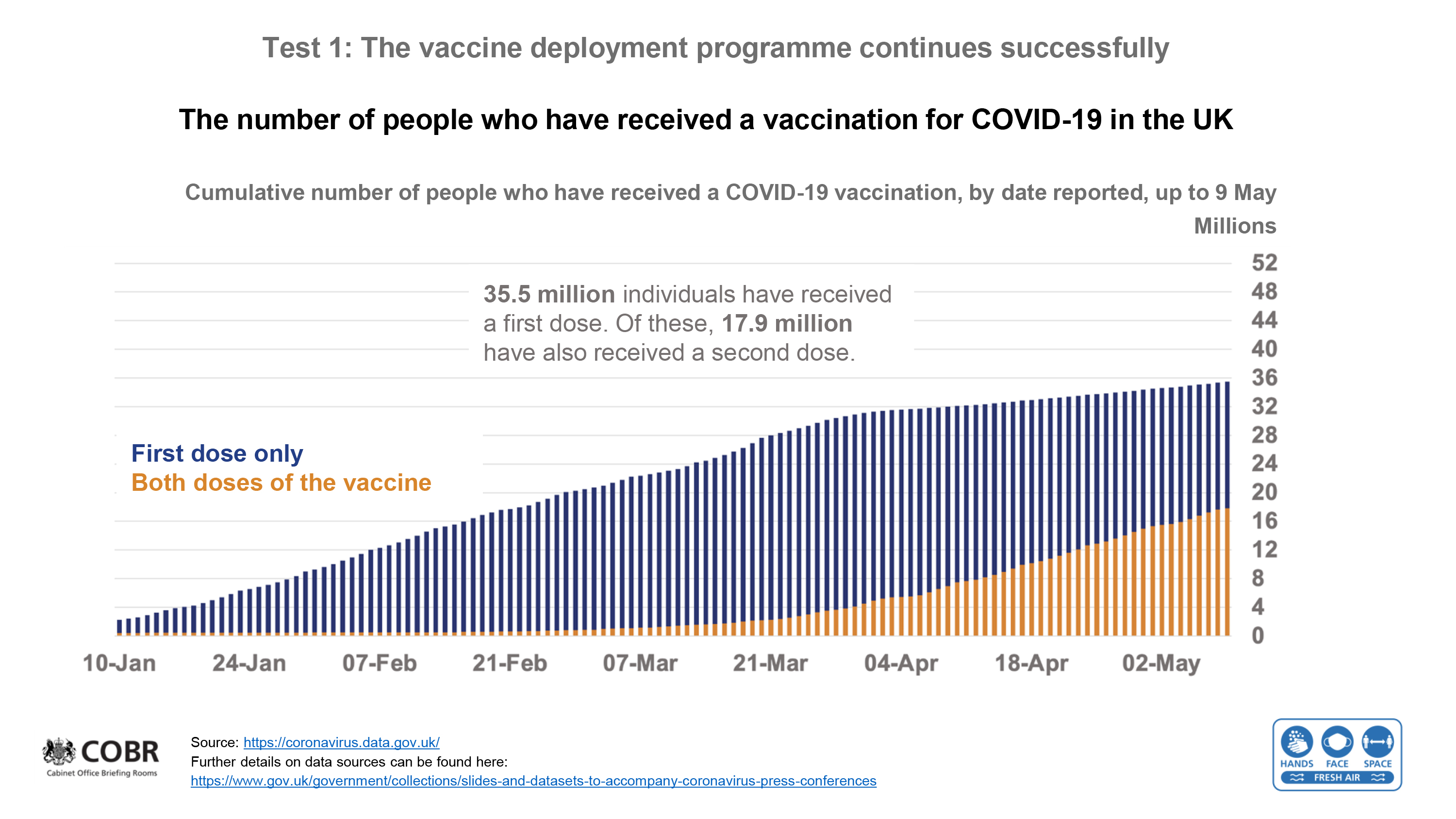 He said it was clear it had been a successful programme and that high vaccine rates had continued due to the efforts of the NHS.

The second test is that evidence continues to show a decrease in hospitalisations and deaths.

He added: "The chance of dying is weighted towards people who are older or have underlying health conditions." 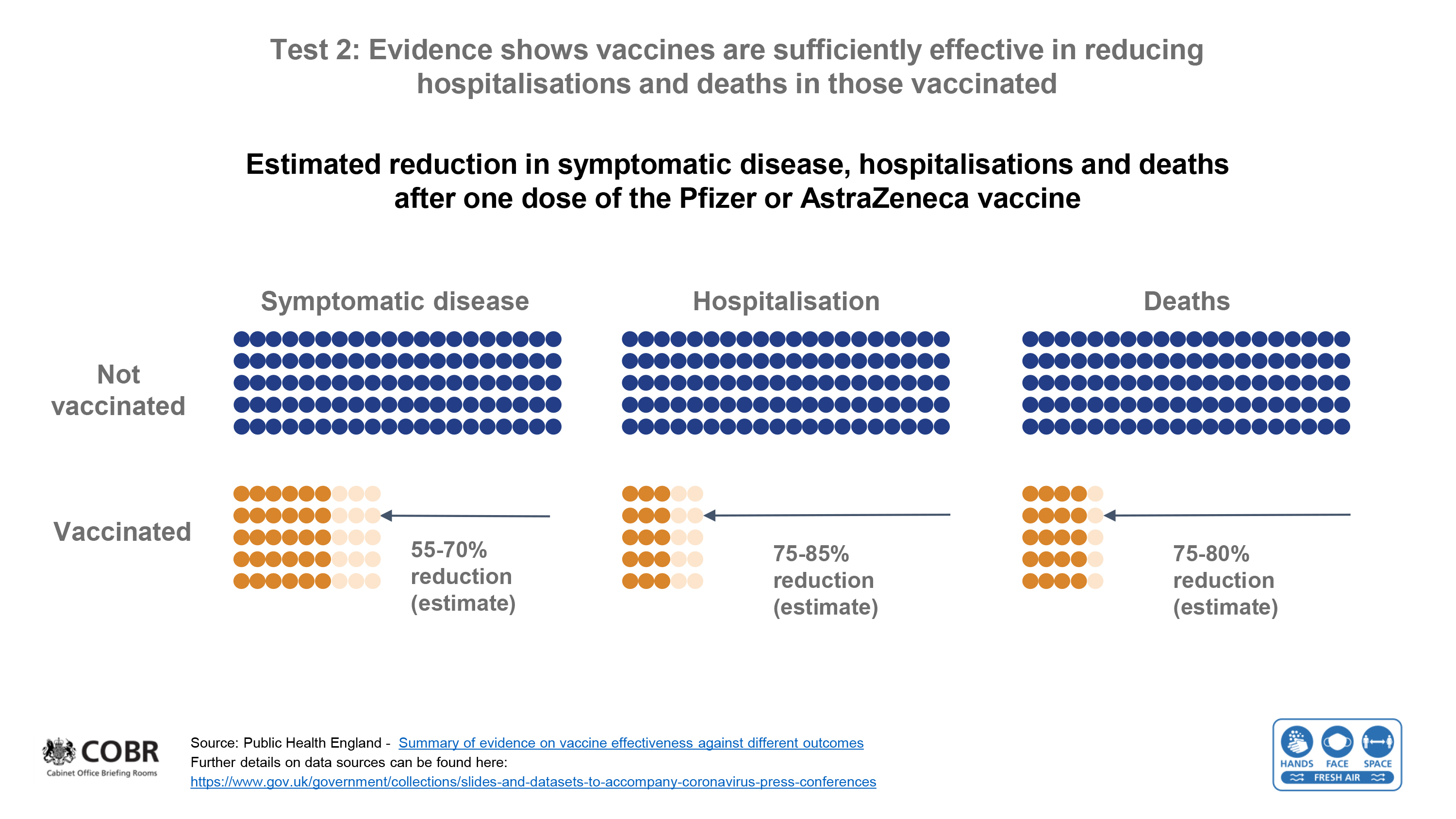 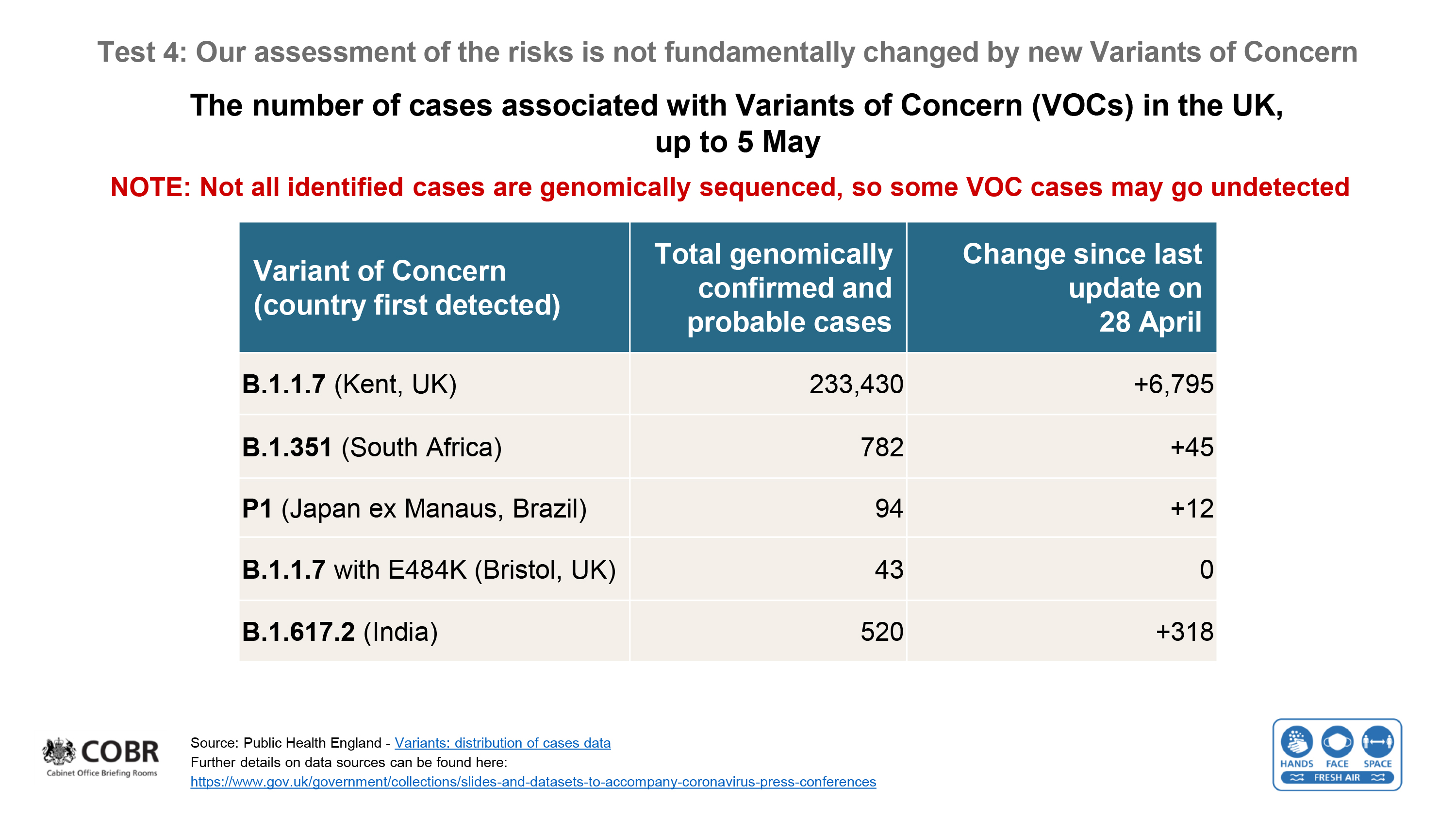 Prof Whitty said that the final and most difficult risk is the assessment of variants of concern.

He did however explain this evening that most of the variants are currently relatively stable and not increasing at a great rate.

"The one that is slightly concerning in terms of increasing as a proportion is the variant which has been described from India.

"That does appear to be increasing but from very low levels over the last two weeks", Prof Whitty added.