Four more migrant boats have been intercepted off the Kent coast today, as immigration minister Chris Philp heads to Paris for crunch talks on the crisis amid growing UK government anger.

The HMC Seeker was deployed to intercept the boats this morning, the Border Force vessel cutting through the water to pick up migrants.

At least one of the boats were seen being taken into Dover with more than 30 migrants involved in total, though exact figures are not yet known.

Around 13 Sudanese migrants are thought to have been in a single boat, with reports of at least 10 and 15 on others amid ideal weather conditions for the 21-mile crossing.

Yesterday, 18 Syrian migrants, including women, landed in one boat on Monday and, so far this year, 4,301 migrants have reached the UK in total. That includes 751 this month alone – rapidly approaching the record 1,118 who arrived in July.

Border Force customs cutter Seeker has been active in the Channel in recent days as migrants continue to cross to Britain and has been joined by HMC Protector and patrol boat Hunter.

The Seeker has previously been used to patrol the waters around Gibraltar, tackling drug smuggling, but has been called upon several times over the past two years to deal with migrant crossings.

The furious words came as the two countries prepared for a crisis meeting in Paris at which France is expected to demand £30 million to strengthen security in the English Channel. 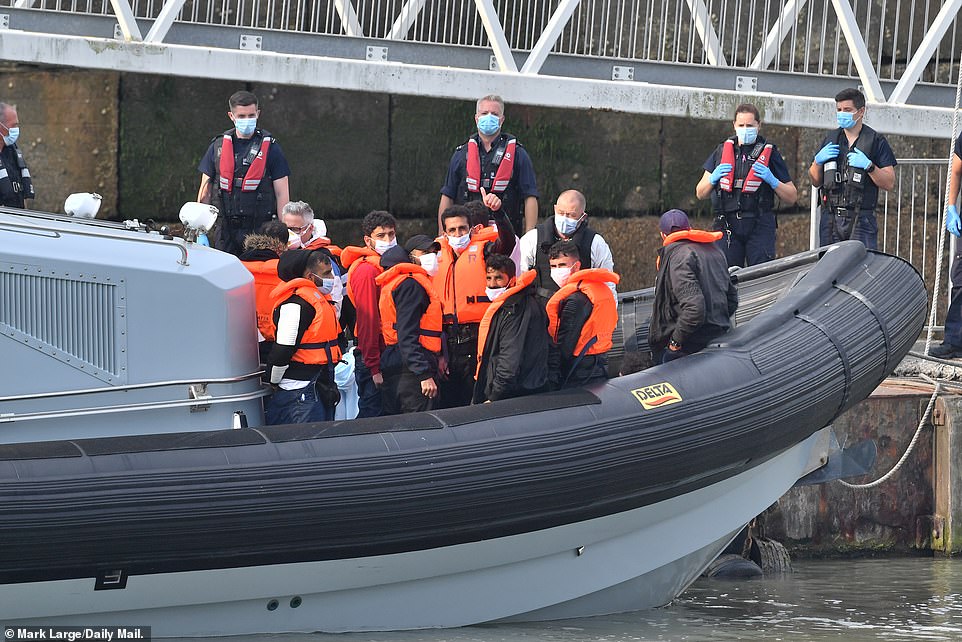 Migrants arrive in Dover this morning, the latest group to make the perilous crossing from Calais to the UK despite growing anger 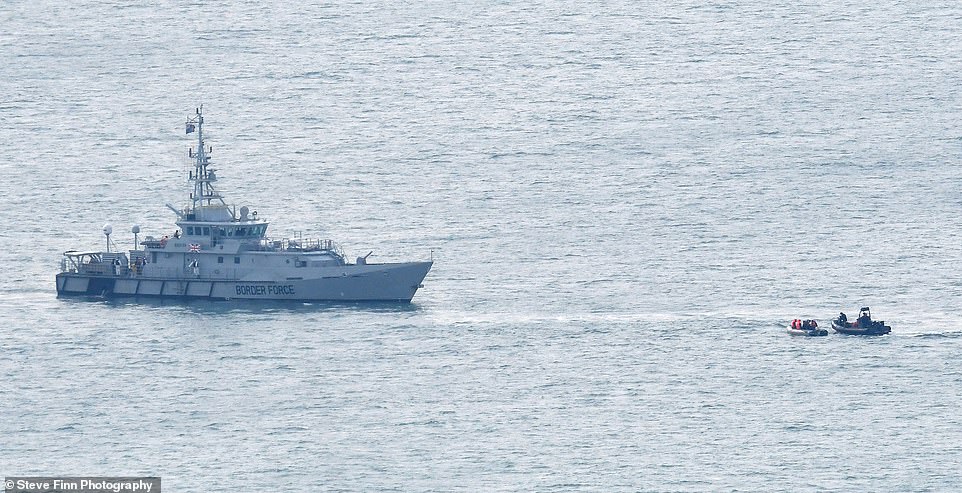 A Border Force ship is dispatched to rescue a migrant boat caught in the Channel this morning, before being brought into harbour 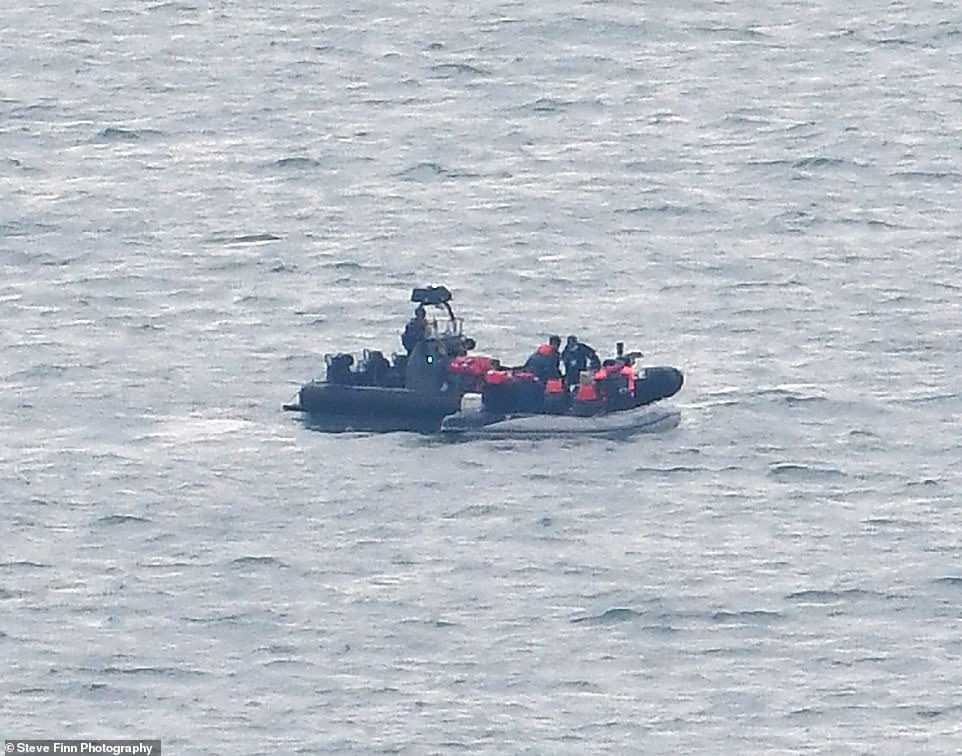 At least four migrant boats were spotted in the Channel today, although the exact number making the crossing has yet to be confirmed 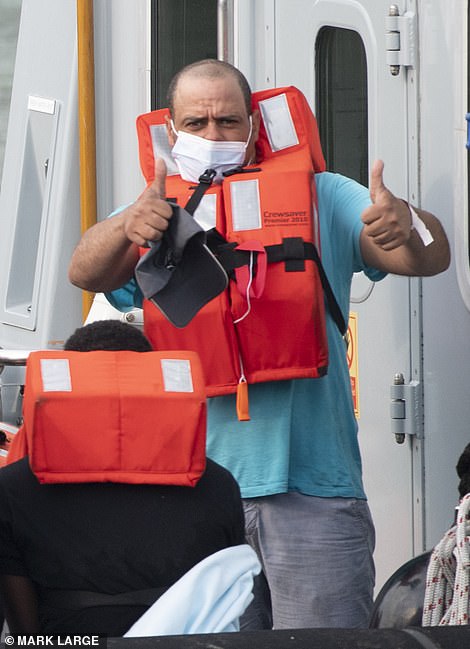 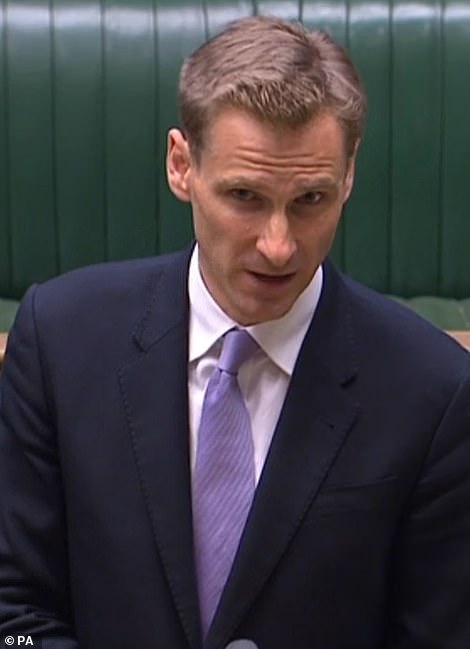 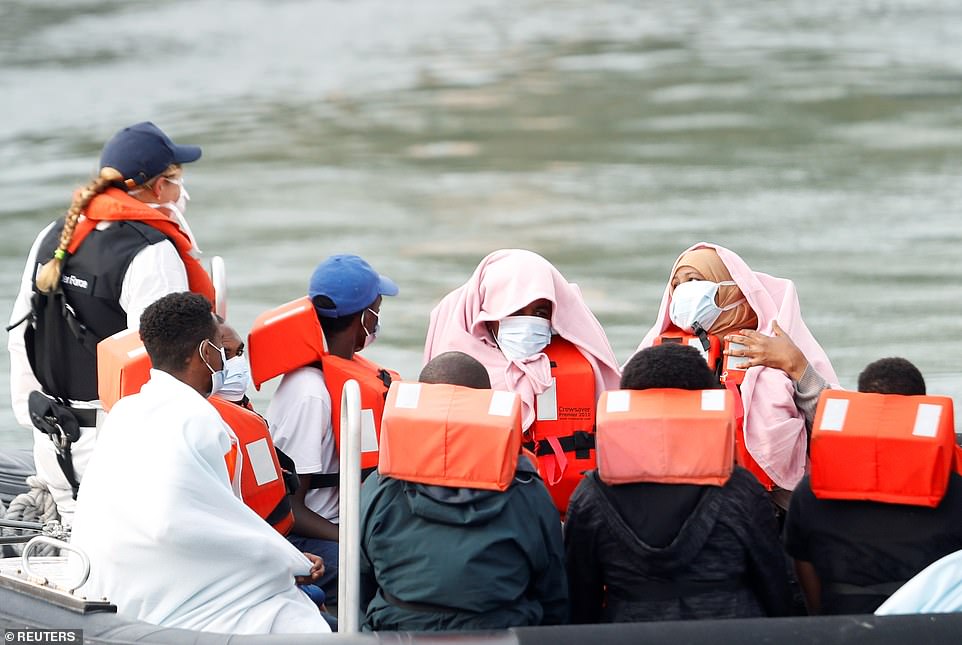 Migrants, including women, are brought into Dover harbour by the Border Patrol this morning. It is unclear how many made the journey today 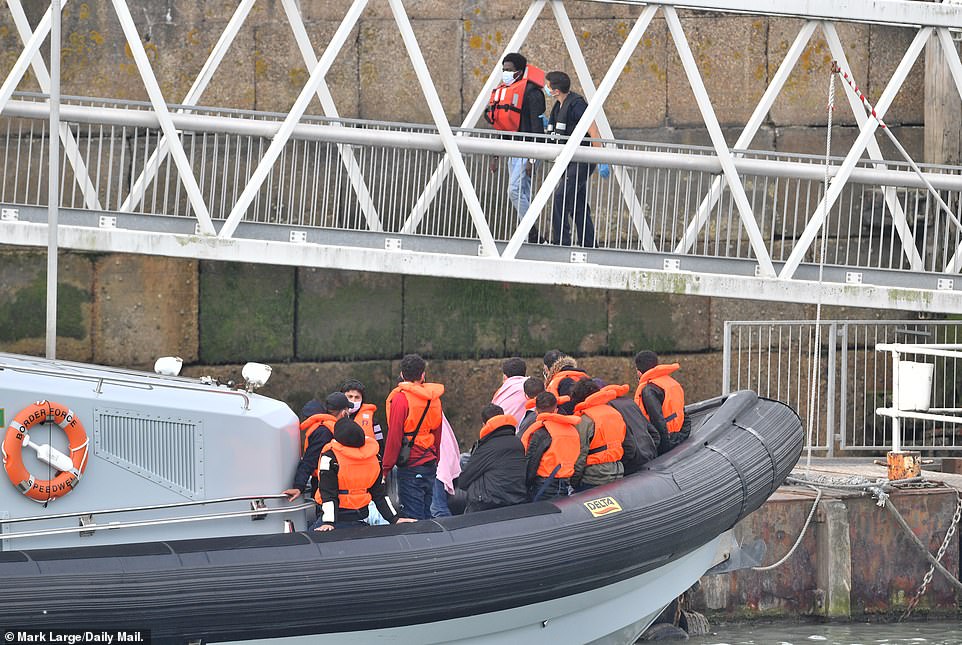 It is unclear how many arrived in Dover this morning, following days of UK government anger at the numbers crossings 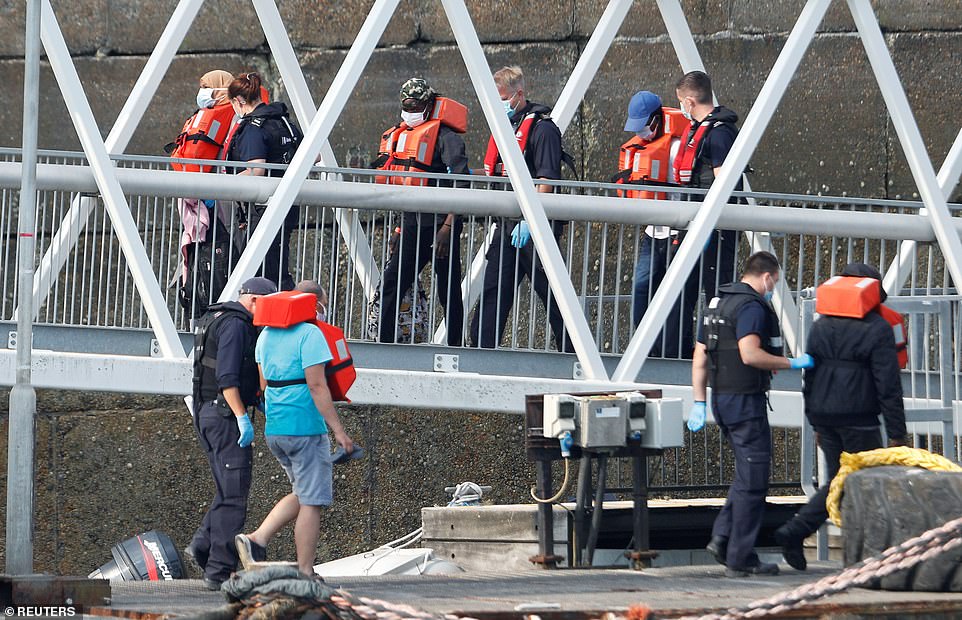 Migrants disembark after arriving at Dover harbour this morning, the latest to arrive after days of constant crossings from Calais to the UK 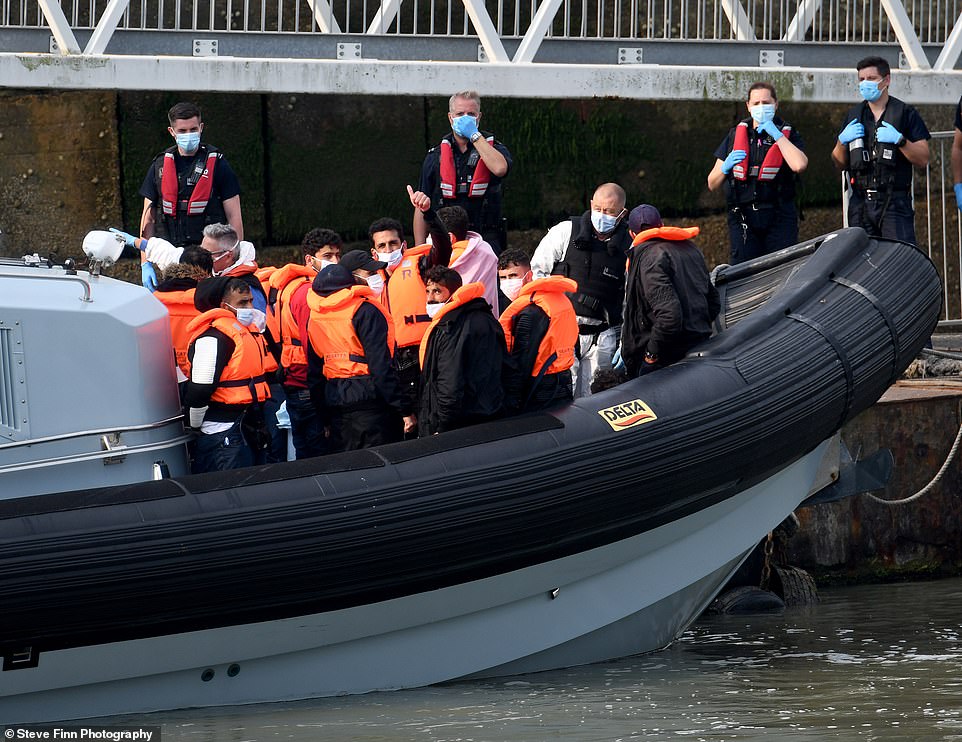 While the British government has continually accused the French of not doing enough to intercept small boats packed with migrants, the French claim that the real problems are in the UK.

Philippe Mignonet, the deputy mayor of Calais, said: ‘Yes, I fear a tragedy one day at sea, but the British blame us for their own hypocrisy.

‘The migrants go to Great Britain because they can work in the black economy when they want, because there is no control, not on the street or in the workplace.’

Mr Mignonet’s words to the Voix du Nord newspaper were backed up by Bernard Barron, president of the SNSM sea rescue service in Calais.

Mr Barron said: ‘The British criticise migrants for wanting to come but they do not criticise themselves, questioning the reasons that make their country so attractive.

‘The SNSM now observes that the candidates for exile have mastered the sea and, with GPS support, wait until they are in British waters to send out an SOS call’.

Chris Philp, Britain’s immigration minister, can expect a frosty welcome in Paris on Tuesday as he takes part in bilateral talks with French officials.

They are particularly angry at ‘fantasy claims’ by British Home Secretary Priti Patel that they are reluctant to stop small crafts in the Channel.

‘This is simply not true,’ said a senior government official in Paris, pointing to daily operations by Navy, gendarmerie and other coastal units.

On Saturday alone, some 37 African and Iranian nationals were towed back to Calais in their inflatable dinghies by the French. 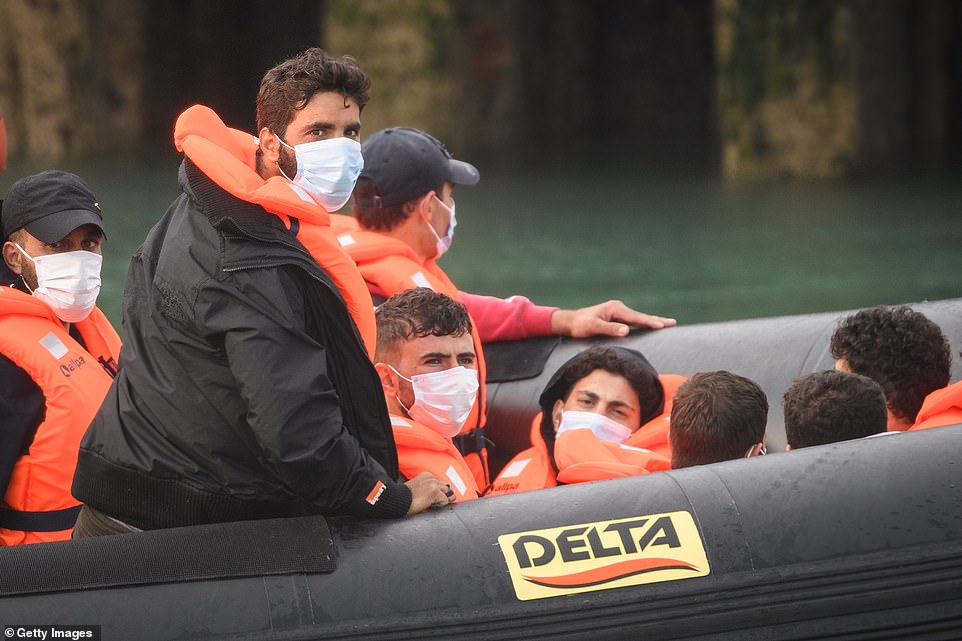 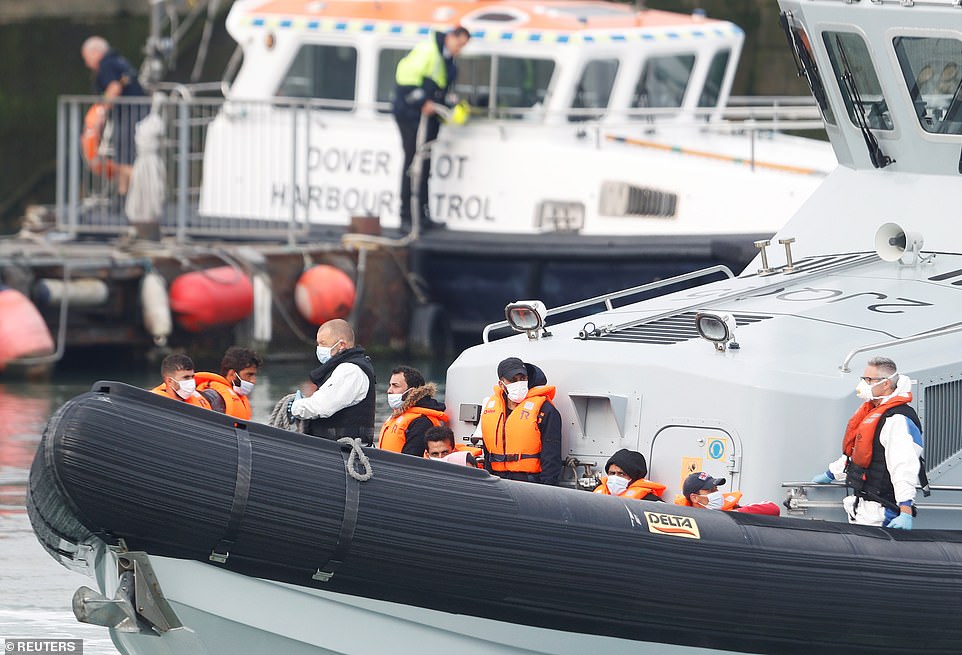 A Border Force boat carrying migrants arrives at Dover harbour this morning, after another day of multiple crossings from France to the UK 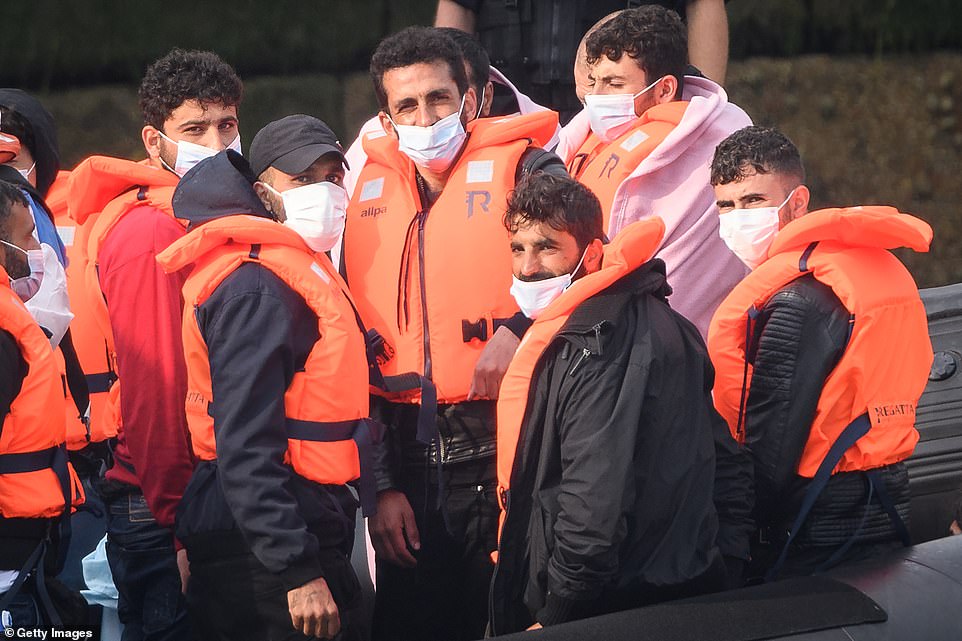 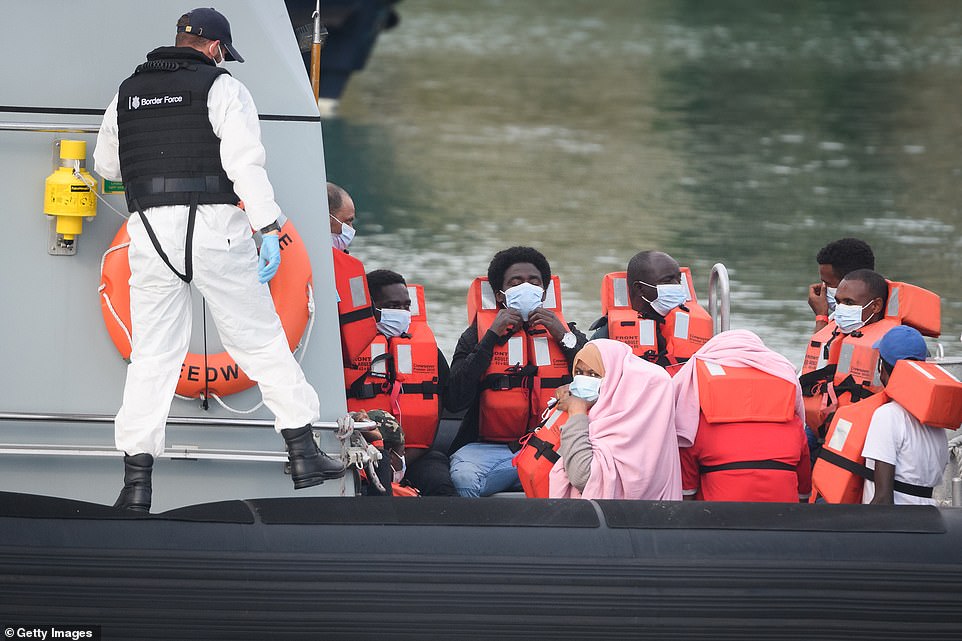 Women were seen among the migrants arriving today, include around 13 who said they had originally fled from Sudan before crossing the Channel

A French Interior Ministry spokesman said: ‘For the month of July 2020, we prevented ten times more crossings than in July 2019.’

He said ‘four times as many boats and other equipment’ were also discovered in the sand dunes around Calais and confiscated.

France claims that this shows the country is ‘fully mobilised’ in stopping the migrants getting to Britain, but more money and resources are needed.

Mr Philp has argued that France is a safe country and he shares ‘the anger and frustration of the public’ that migrants do not claim asylum there.

He said flights were being planned to send new arrivals back to France, and that more work would be done to tackle people smugglers who charge up to £1000 for a Channel crossing.

Britain has already paid more than £100million to help French authorities stop migrants in over the past decade.

But more than 500 people have been intercepted crossing the Channel over the past week.

They are were all taking advantage of calm seas and good weather to make the journey across one of the world’s busiest shipping lanes.

It comes after it was revealed that people smugglers are offering migrants ‘kids go free deals’ while dropping their prices for small-boat Channel crossings. 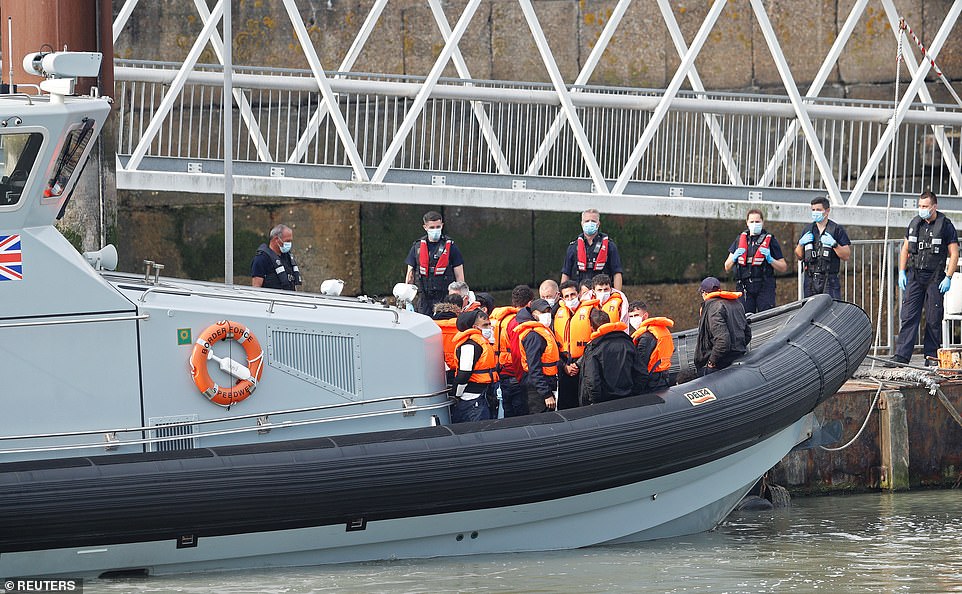 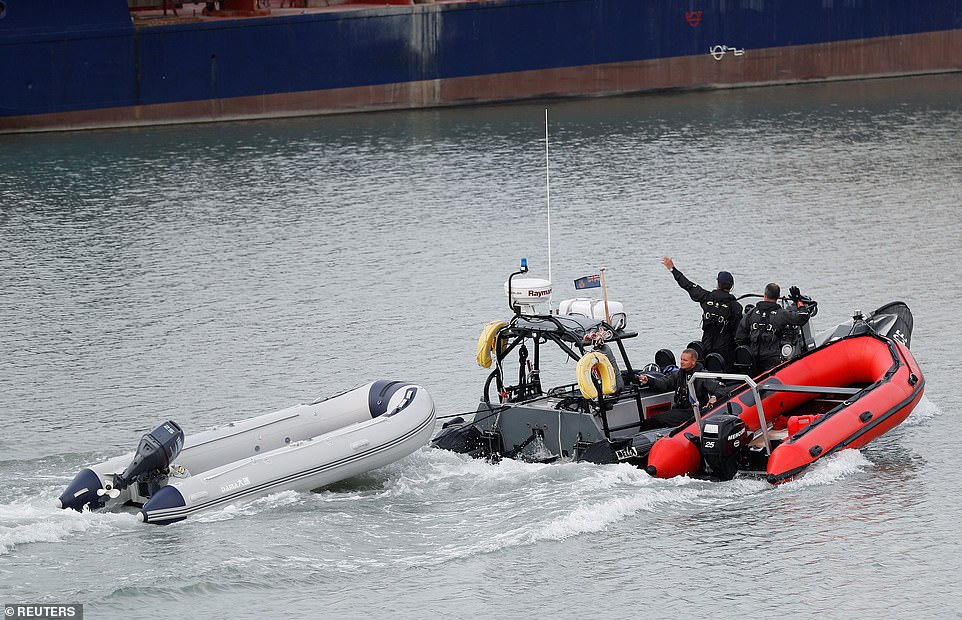 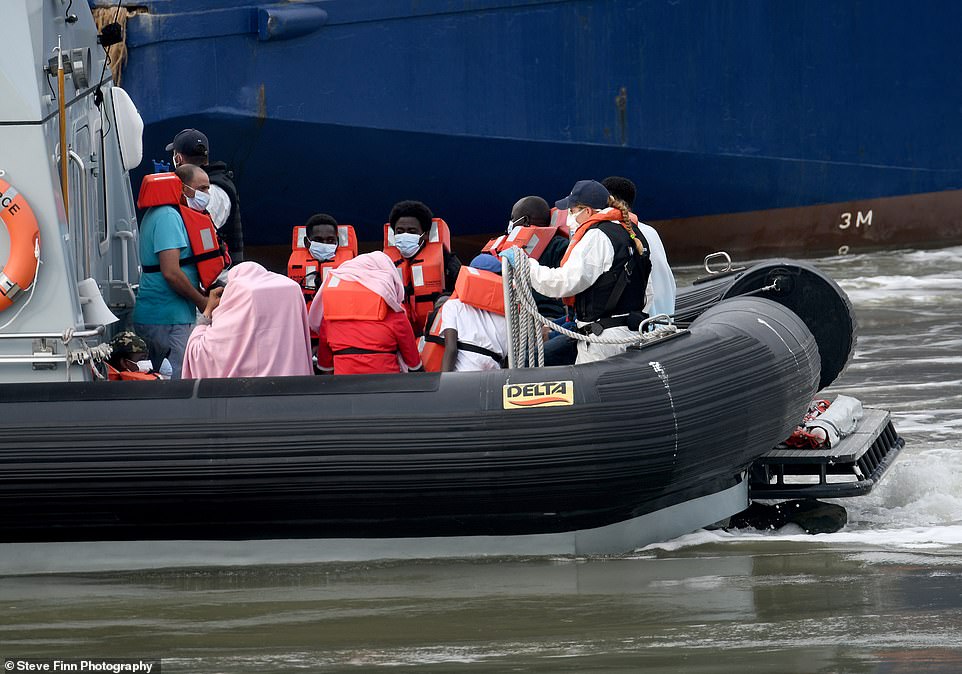 Yesterday, 18 Syrian migrants, including women, landed in one boat on Monday and, so far this year, 4,301 migrants have reached the UK in total 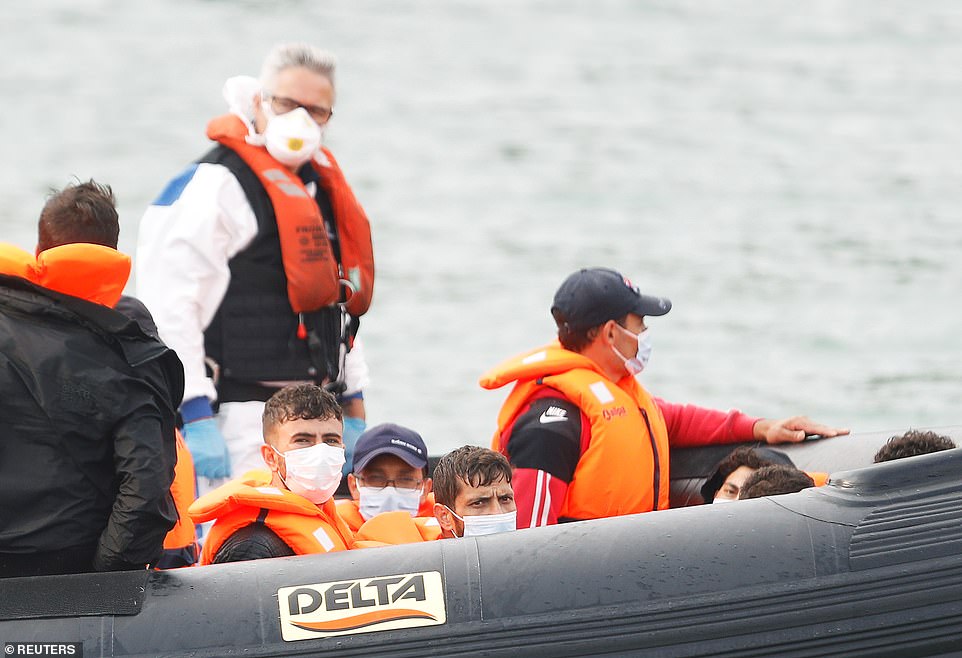 It is unclear how many migrants made the crossing today, though Sky News and other observers noted at least four boats

Desperate parents are being told they don’t have to pay to carry babies and toddlers as the ruthless smugglers lure them into completing the perilous crossings.

In some cases, the gangs have even dropped their prices from £5,000 to £500 in an attempt to encourage more families to cross to Britain from Calais.

News of the cut price deals is sure to raise alarms as the British government pledges to tackle the crossings.

A law enforcement official commented on the ‘special offers’, adding that the smugglers will do anything to ‘make their profit from misery’.

British officials have also been briefed on intelligence showing how the gangs are cutting their prices.

A charity worker in northern France told The Sun: ‘We’ve spoken to people intercepted en route to the UK who have told us how babies and infants are getting into dinghies for free. Younger children and teenagers are being allowed on for just a few hundred pounds a time.’

A source added: ‘The prices these gangmasters charge has dropped a hell of a lot recently. 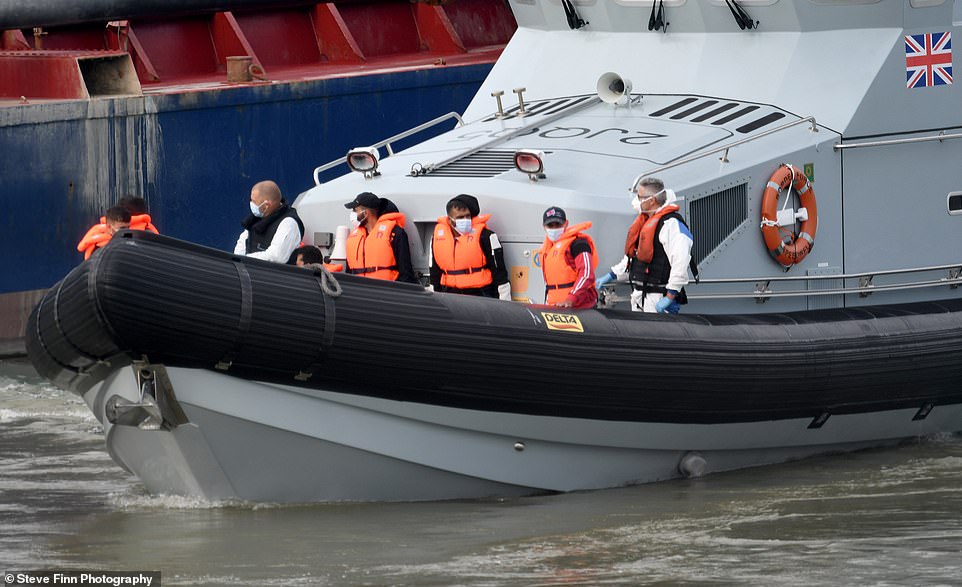 Chris Philp, Britain’s immigration minister, can expect a frosty welcome in Paris on Tuesday as he takes part in bilateral talks with French officials to tackle the influx of migrants 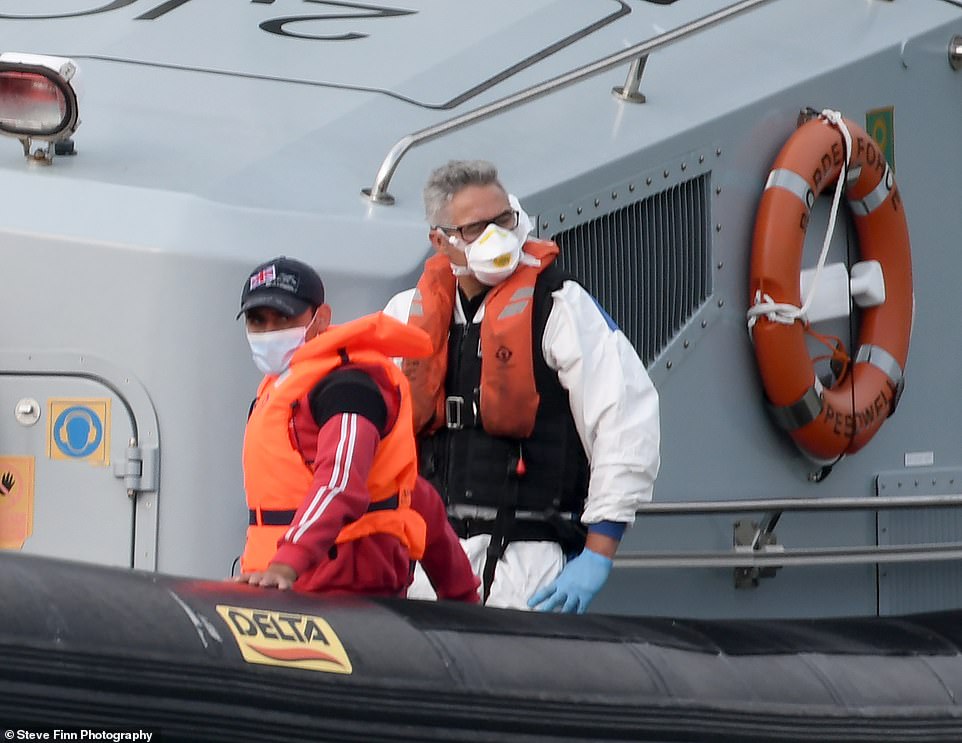 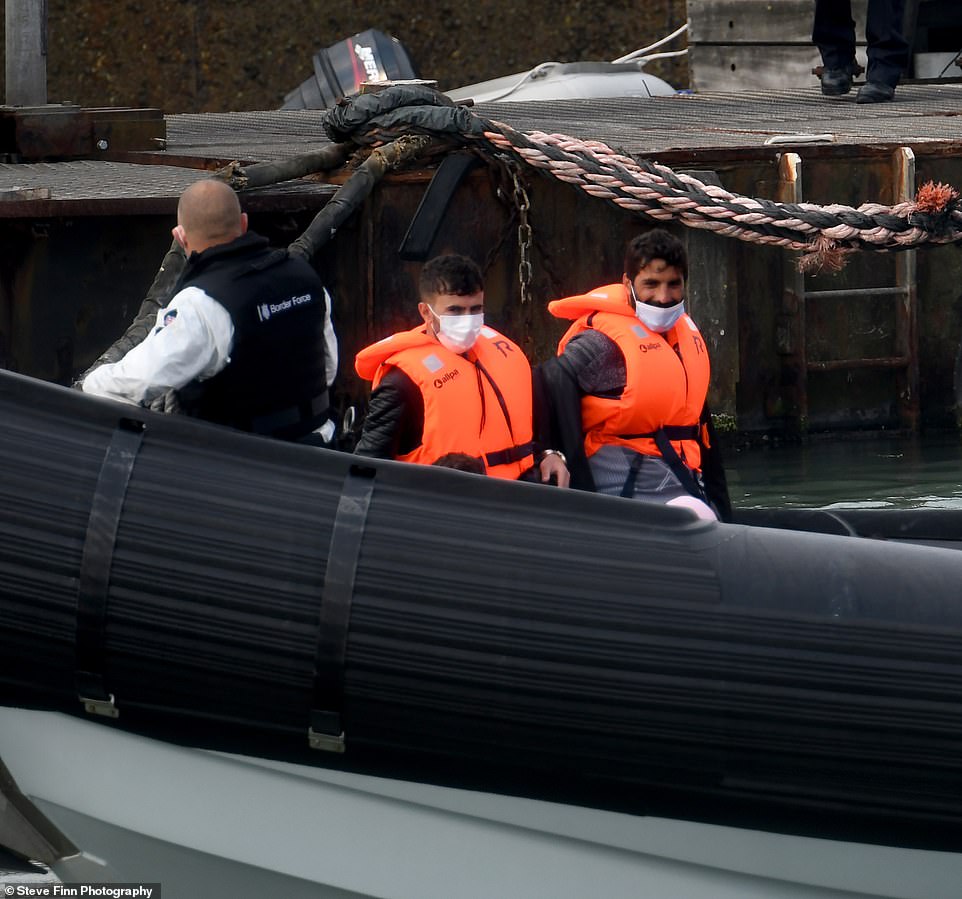 ‘They are also tempting people by saying if you get stopped you can try again and again until you do cross.’

The latest revelations also highlight the horrifying lengths migrants are going to in an attempt to avoid deportation.

A source said that some are arriving with burnt or shaved off fingerprints, while carrying no ID, which make it impossible to determine who they are or where they come from.

It comes amid a crackdown on the migrant crossings from the British government.

Priti Patel will today demand French co-operation in a massive new ‘blockade’ of the Channel to crack down on the migrant crisis.

The Home Secretary will refuse to hand over any more taxpayers’ money to fund operations on French soil unless Emmanuel Macron’s government steps up action on illegal crossings.

The French will also be expected to accept deportations of larger numbers of migrants who cross illegally, as well as failed asylum seekers, as part of a potential £30million deal.

Boris Johnson branded the Channel crossings a ‘very bad and stupid and dangerous and criminal thing to do’ as he hinted at changing laws to tackle the deepening crisis. 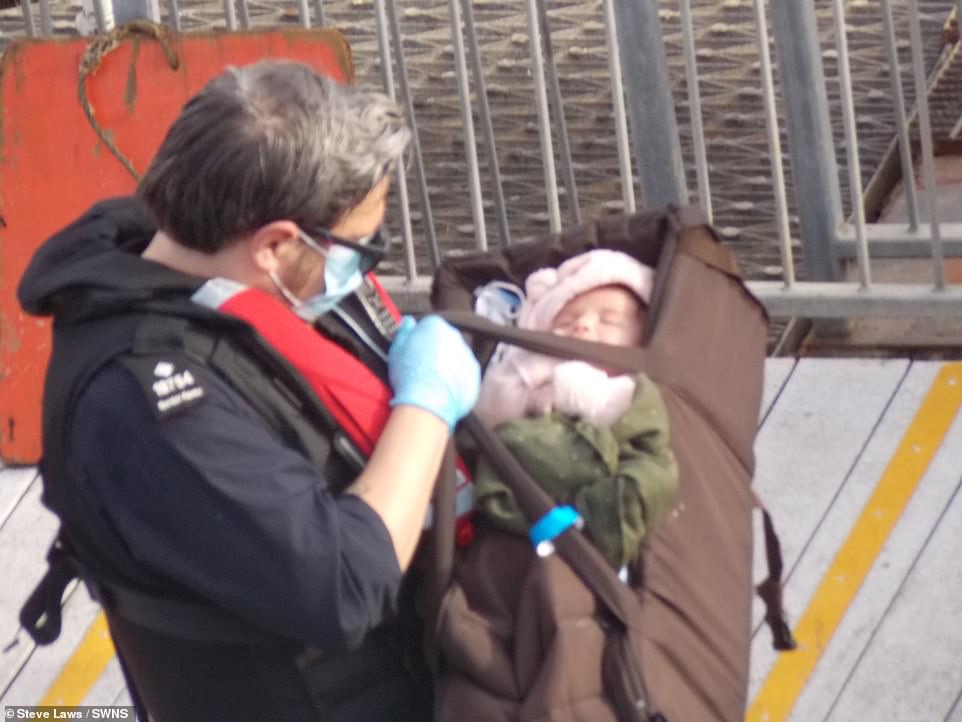 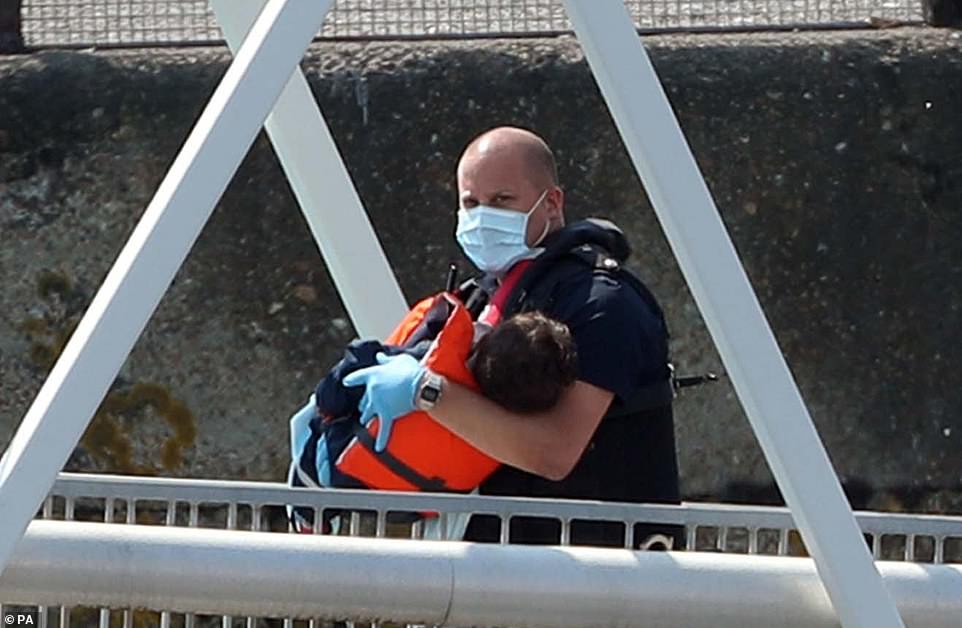 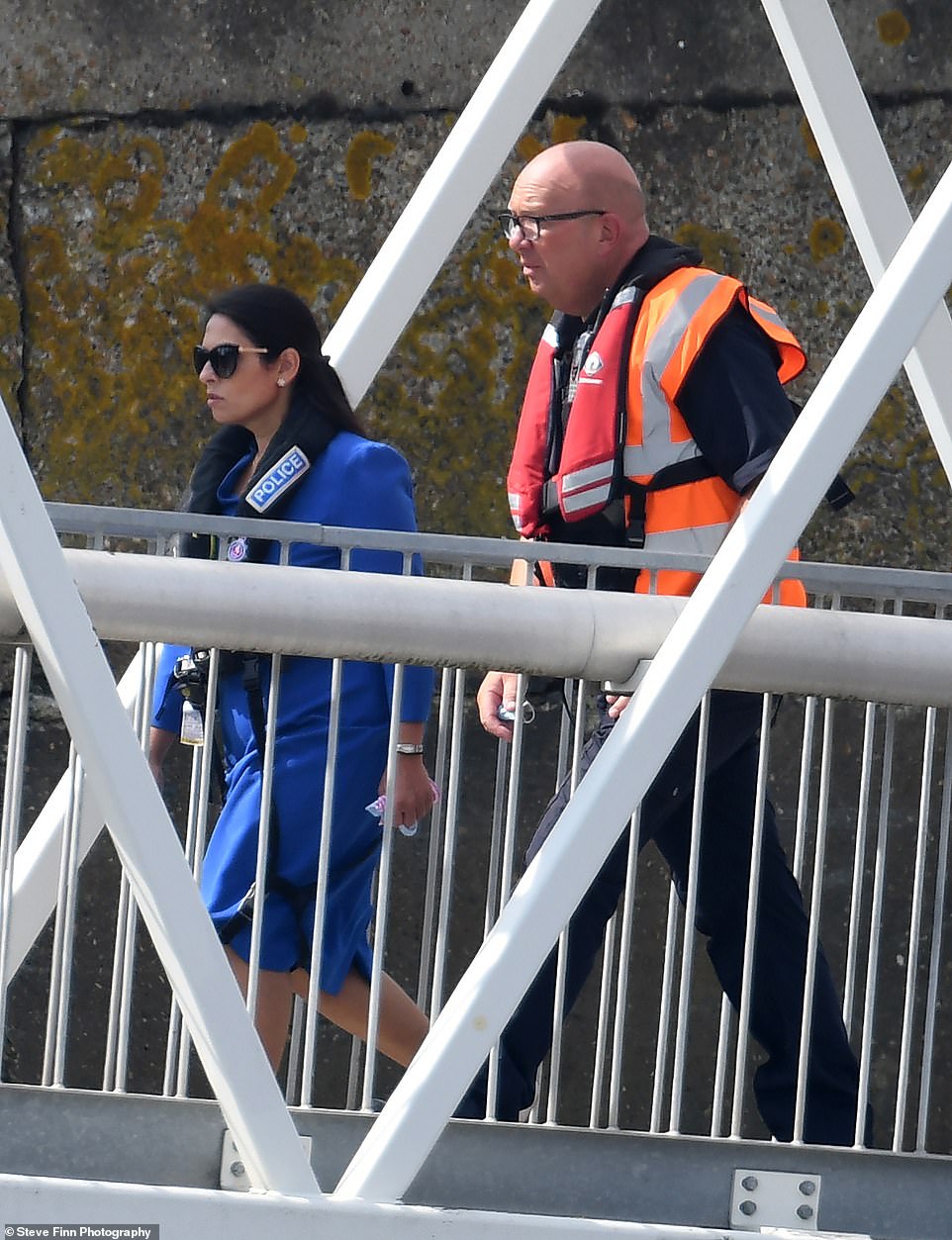 Home Secretary Priti Patel headed to Dover yesterday, and was seen disembarking from a police boat that had been out in the Channel earlier that morning

The PM said the UK needed to ‘look at the legal framework’ for migrants who have arrived in the UK illegally, adding it was ‘very, very difficult to then send them away again.’

In proposals being outlined at a summit in Paris with Home Office minister Chris Philp this morning, it is understood the UK will set out how it hopes migrant boats can be barred from crossing the strait.

Royal Navy vessels and Border Force patrol boats will be used to block their path, even deploying nets to entangle propellers and floating ‘booms’, it is understood.

French patrol boats, which currently ‘escort’ migrant boats across the Channel, will be expected to take part in the operation to return the small ships to French beaches, officials said.

In a further demand, more migrants who reach British shores should be sent straight back to France.

However, it is understood the proposed deal will not set a target for the number of deportations.

The UK will also urge the French to fingerprint migrants in the Calais camps.

Migrants’ ‘biometrics’ will then be uploaded to an existing EU database, known as EURODAC, so that anyone who later claims asylum in the UK can be returned under EU rules.

In the last five years the UK has given France £114million to fund operations against illegal migrants and people traffickers. But numbers are spiralling, with more than 4,300 arriving so far this year compared to 1,850 in all of 2019.

Yesterday British military assets were deployed for the first time to tackle the flow of small boats, with an RAF aircraft carrying out a surveillance flight. Miss Patel also boarded a police launch from Dover to witness operations.

‘The number of illegal small boat crossings we have seen recently is totally unacceptable,’ she said.

‘Our operational partners are dealing with complex challenges associated with them and collectively with the French we need to make this route unviable.

‘Across Government we are absolutely committed to shutting down this route and we will bring down the criminal gangs that facilitate these illegal crossings.’