ABOARD USS RONALD REAGAN (Reuters) – U.S. fighter jets darted over the Western Pacific on Saturday as the nuclear powered USS Ronald Reagan aircraft carrier joined Japanese destroyers and a Canadian warship for the biggest combat readiness war game ever staged in and around Japan. 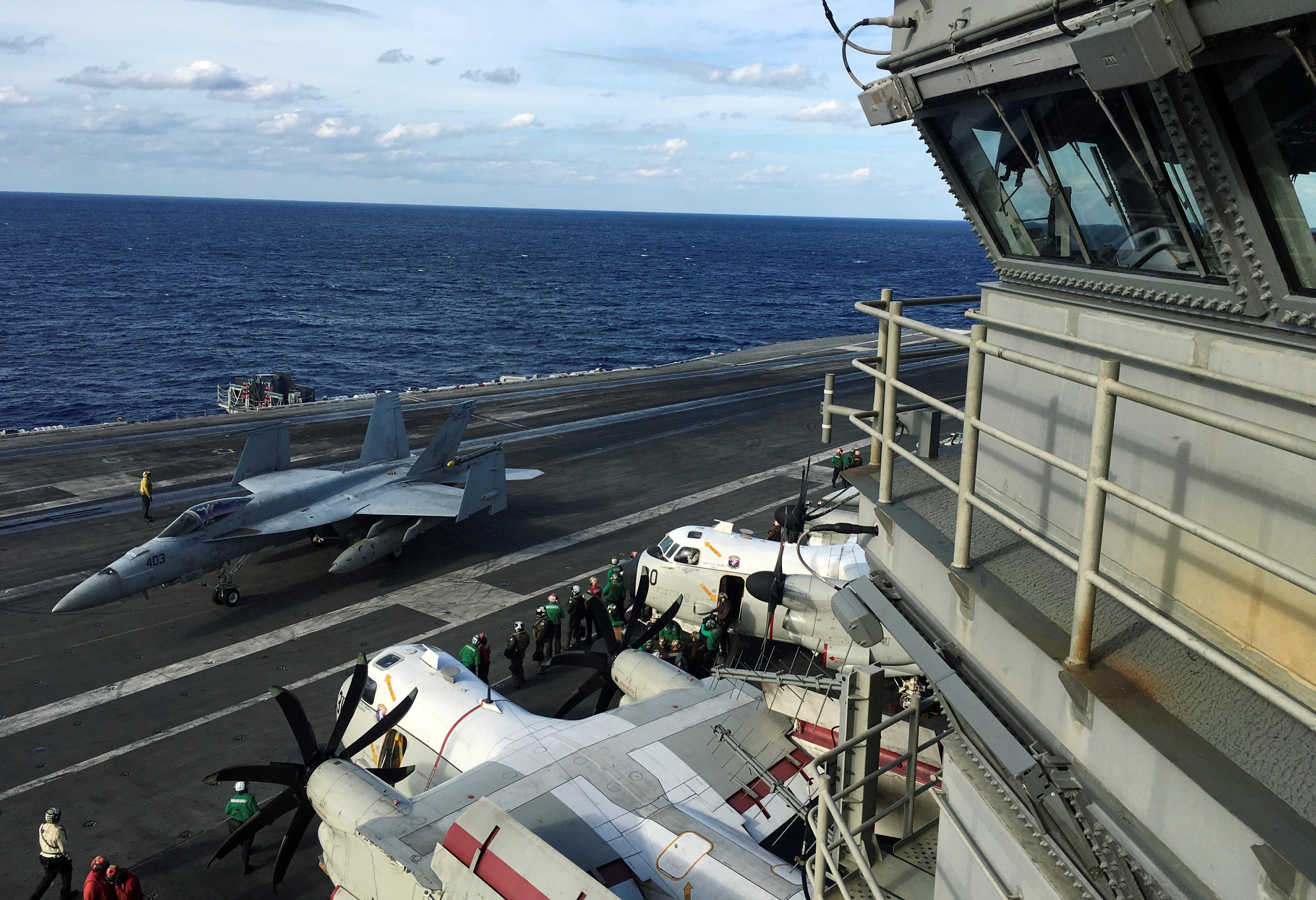 Japan and the United States have mobilized 57,000 sailors, marines and airmen for the biennial Keen Sword exercise, 11,000 more than in 2016, with simulated air combat, amphibious landings and ballistic missile defense drills. Japan’s contingent of 47,000 personnel represents a fifth of the nation’s armed forces.

“We are here to stabilize, and preserve our capability should it be needed. Exercises like Keen Sword are exactly the kind of thing we need to do,” Rear Admiral Karl Thomas, the commander of the carrier strike group, said during a press briefing in the Reagan’s focsle as F-18 fighter jets catapulted off the flight deck above him.

Eight other ships joined the carrier for anti-submarine warfare drills in a show of force in waters that Washington and Tokyo fear will increasingly come under Beijing’s influence.

“The U.S.-Japan alliance is essential for stability in this region and the wider Indo Pacific,” Rear Admiral Hiroshi Egawa, the commander of the Japanese ships said aboard the Reagan

Based in Yokosuka near Tokyo, it is the biggest U.S. warship in Asia, with a crew of 5,000 sailors and around 90 F-18 Super Hornets fighters.

A Canadian naval supply ship is also taking part in Keen Sword along with the frigate that sailed with the Reagan on Saturday.

Canadian participation is taking a bilateral drill which began in 1986 “into the realm of multilateral exercises,” Canada’s defense attache in Japan, Captain Hugues Canuel said in Tokyo. Participation in Keen Sword, he added, reflects Canada’s desire to have a military presence in Asia.

Canada isn’t the only western nation looking to take a bigger security role in the region. Britain and France are also sending more ships as China’s military presence in the South China Sea grows and its influence over the Indo Pacific and its key trade routes expands.

Growing foreign interest in Asian security, including North Korea’s development of nuclear weapons and ballistic missiles, coincides with greater Japanese willingness to back up its regional diplomacy with a show of military muscle.

Tokyo this year sent its biggest warship, the Kaga helicopter carrier, on a two-month tour of the Indo Pacific, including flag-waving stops in the Philippines, Indonesia, Sri Lanka, India and Singapore.

At the same time, Japanese Prime Minister Shinzo Abe has engaged China in dialogue to reduce tension between their militaries in the East China Sea and to increase economic cooperation between Asia’s two leading economies.

Amid a background of trade friction with Washington, Abe last month traveled to Beijing, the first such trip by a Japanese leader in seven years, for talks with President Xi Jinping and Premier Li Keqiang. Abe told them that China and Japan shared responsibility for regional security, including tackling North Korean.

Japan, however, still views China as a potentially much larger and more challenging foe than Pyongyang as its expanding navy consolidates control of the South China Sea and ventures deeper into the Western Pacific and Indian Ocean. 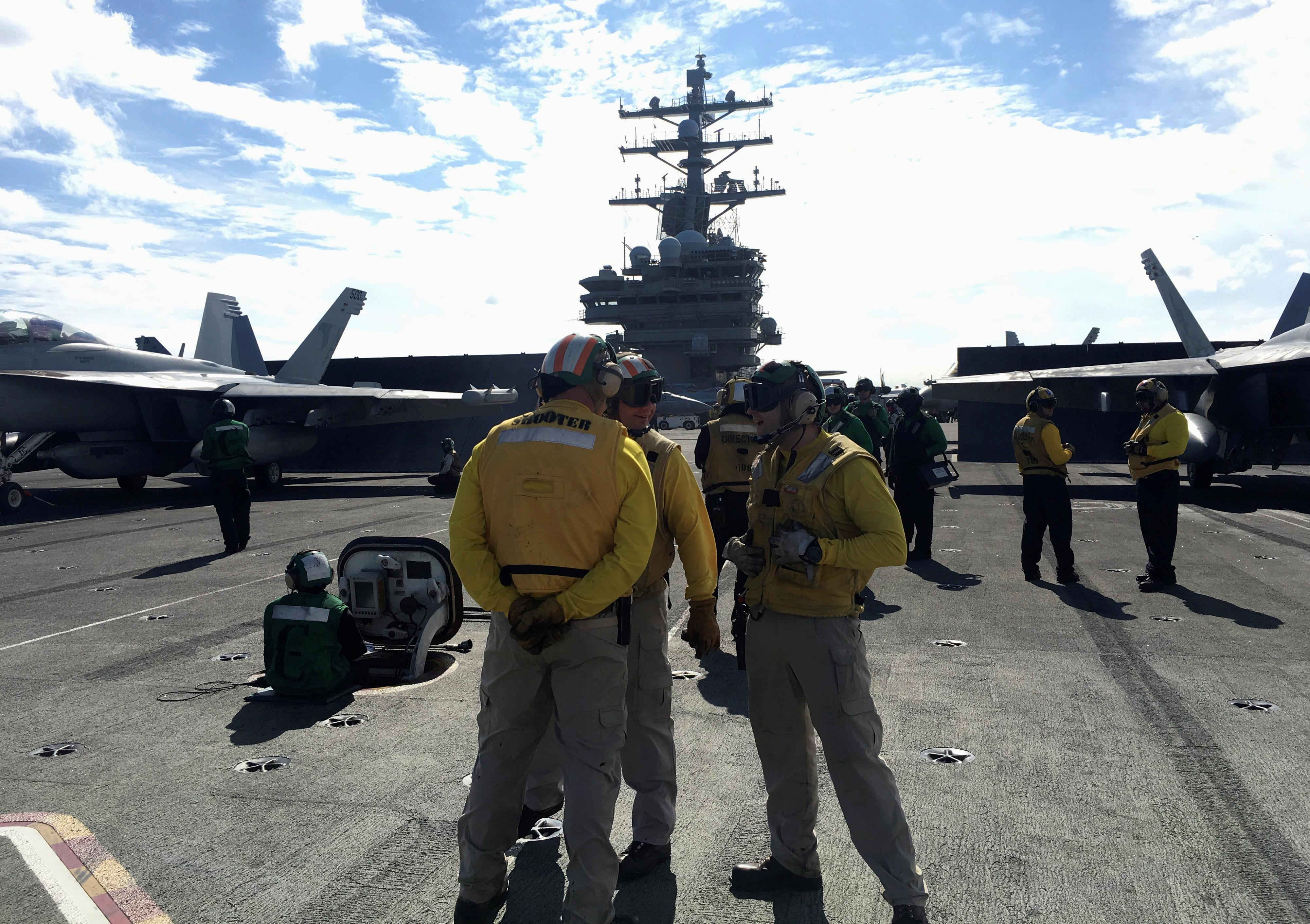 Beijing this year plans to spend 1.11 trillion yuan ($160 billion) on its armed forces, more than three times as much as Japan and about a third of what the U.S. pays for a military that helps defend the Japanese islands.

Keen Sword “remains an expression of the commitment of like minded allies and partners. To really see what we can do in terms of demonstrating advanced capabilities together to ensure peace and stability in the Indo Pacific,” Chief of U.S. Naval Operations Admiral John Richardson said on Thursday in Australia during a telephone press briefing.