Home » World News » ‘This is the moment’: European leaders’ push to shake off US and China dependence

‘This is the moment’: European leaders’ push to shake off US and China dependence

Brussels: European Union leaders are pushing for its industries to have greater independence from China and the United States, ensuring the 27-nation bloc can better confront futures issues after the coronavirus pandemic and its ensuing recession.

In her annual State of the Union address, European Commission President Ursula von der Leyen doubled down on the flagship goals she set out on taking office last December: urgent action to combat climate change and a digital revolution. 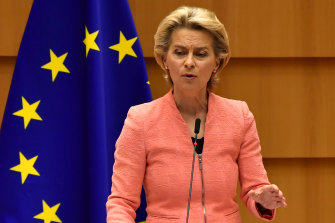 ‘This is the moment for Europe’ … European Commission President Ursula von der Leyen.Credit:Bloomberg

Von der Leyen, who wants Europe to become the world's first climate-neutral continent by mid-century, unveiled a plan to cut the EU's greenhouse gas emissions by at least 55 per cent from 1990 levels by 2030, up from an existing target of 40 per cent. She also pledged to use green bonds to finance those climate goals.

The bloc wants to finance the transformation of digital and green technologies by using much of its $1.215 trillion fund for kick-starting the economy after the pandemic.

The COVID-19 pandemic has highlighted the EU's dependence on Chinese components in the production of drugs, and concern is mounting that it is lagging the United States in the design and manufacture of batteries and in digital cloud storage.

The draft conclusions – which could still be subject to change – show leaders would name the European Battery Alliance, the Internet of Things and Clean Hydrogen Alliance as projects for the EU to focus on.

They will also call for the development of new industrial alliances, including on raw materials, micro-processors, telecommunication networks, low-carbon industries, and Industrial Clouds and Platforms.

The leaders will also declare they want "a significant part" of a fund that will be available to EU countries under the bloc's budget and recovery package over the next seven years to be invested in supercomputers and quantum computing, blockchain, human-centred artificial intelligence, microprocessors, 5G mobile networks or protection against cyber threats and secure communications.

Turning to the troubled talks with London on the future relationship between the world's fifth-largest economy and biggest trading bloc, von der Leyen said every passing day reduces chances for sealing a new trade deal.

She stressed that the EU and Britain negotiated and ratified their Brexit divorce deal and warned London the agreement "cannot be unilaterally changed, disregarded or dis-applied".