Home » World News » ‘This is not where he needs to be’: Kookaburra discovered for sale in US pet shop

‘This is not where he needs to be’: Kookaburra discovered for sale in US pet shop

An Australian woman who found a solitary kookaburra for sale in an American pet store says his conditions left her feeling sad.

Wendy Davidson, an expat living in Virginia, spotted the bird named Thunder in her local pet store listed for $US1199 ($1692). 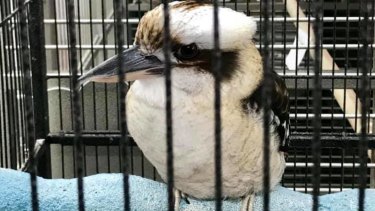 "He has only known solitude and that is what made me feel really quite sad for him," she told Channel Nine.

Ms Davison said she was surprised when she visited the pet store five minutes from her home and saw the bird in a cage.

"I thought this is really not where he needs to be so that's when I started contacting local and Australian authorities," she said.

The Australian woman said she was concerned about the conditions Thunder was being kept.

"I am just literally a concerned Australian who saw a bird which shouldn't be so far from home."

The kookaburra had been bred locally about four years ago, meaning the store was "not acting outside the law, Ms Davison said.

The pet shop, Birds of Pet Paradise, confirmed the bird was not taken from Australia but bred in captivity.

"Thunder's lineage comes from a line of kookaburra that were legally brought into the states and legally bred through our licensed breeder. He was hatched in captivity legally," the store's management wrote.

In NSW, kookaburras are listed under the Native Animal Keepers' Species List and can only be kept with a permit and under other restrictions.