Paris: Anger at France deepened in Muslim-majority countries on Wednesday after a new Charlie Hebdo cartoon showed Turkey's president holding a beer while lifting the skirt of a woman wearing a hijab to reveal her naked buttocks.

Recep Tayyip Erdogan called the cartoonists "scoundrels" and accused the West of wanting to "relaunch the Crusades". His office also vowed to take unspecified "legal and diplomatic actions" through Turkey's legal system. 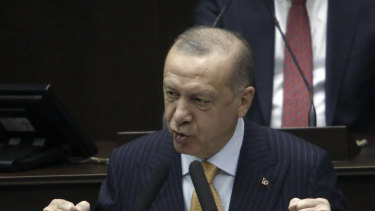 His row with France had initially erupted after Emmanuel Macron ordered a crackdown on Islamists following the beheading of a teacher who showed his class Charlie Hebdo cartoons of Mohammed.

Mr Erdogan claimed he had not seen the cartoon of him in the satirical weekly, "because I consider it wrong to even look at these immoral publications".

He said he was angry over disrespect to Mohammed rather than the "disgusting attack directed at me", adding that the West was "once again headed to a period of barbarity", and describing former colonial powers as "murderers" for their records in Africa and Asia.

He said: "They literally want to relaunch the Crusades. Since the Crusades, the seeds of evil and hatred have started falling on these [Muslim] lands and that's when peace was disrupted."

In response, France recalled its ambassador from Turkey and advised nationals to exercise caution in Muslim-majority countries, including Iran, where crowds protested outside the French embassy in Tehran. Hassan Rouhani, Iran's president, warned that insulting Mohammed would encourage "violence and bloodshed".

Bangladeshis burned effigies of Macron, chanting that he was an enemy of Islam. Imran Khan, Pakistan's prime minister, said if the West could restrict free speech by banning Holocaust denial, they should also outlaw blasphemy that offended Muslims.

Gabriel Attal, a French government spokesman, said: "France will never renounce its principles and values, notably the freedom of expression."