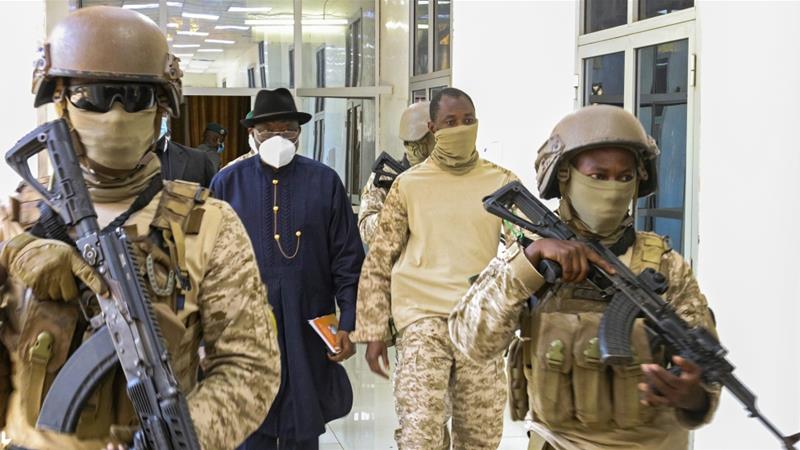 “The discussions are going very well,” Jonathan told journalists as he stepped out during a break, without elaborating.

A senior officer close to the coup leaders told Reuters news agency that the morning’s discussion had focused on the sanctions the bloc imposed on Mali, which include suspending trade and closing borders, following Tuesday’s coup.

Another officer said the delegation had made proposals which would be examined.

The two sides also met briefly, for about 20 minutes, on Saturday.

The overthrow of Keita, known as IBK, was welcomed by many in Mali, which had been rocked by months of protests calling for his resignation amid widespread discontent over alleged corruption and worsening security in large parts of the country where affiliates of al-Qaeda and ISIL (ISIS) are active.

“For more than three hours, the junta and the ECOWAS delegation have been discussing the fate of President IBK and the return to a normal constitutional order,” a member of the delegation said on Sunday, speaking to AFP news agency on condition of anonymity.

Neighbouring countries have called for Keita to be reinstated, saying the purpose of the visit by the 15-member ECOWAS delegation was to help “ensure the immediate return of constitutional order”.

Mali’s new military rulers have welcomed the visit but have not talked of restoring Keita to power.

Keita is being detained at a military camp in the town of Kati outside the capital, Bamako. Jonathan met him on Saturday, saying the 75-year-old is “very fine”.

Keita took office after winning a 2013 election, presenting himself as a unifying figure and promising to tackle corruption. He was re-elected in 2018 for another five-year term, but failed to make headway against the conflict that has rendered large parts of the country ungovernable.

The violence, in which armed groups affiliated with al-Qaeda and ISIL have stoked ethnic tensions while jockeying for power, has spilled into the neighbouring countries of Niger and Burkina Faso, destabilising the wider Sahel region and creating a serious humanitarian crisis.

In recent months, opposition supporters have staged mass rallies calling for Keita’s departure and his toppling prompted thousands of jubilant Malians to celebrate in the streets of Bamako.

The coup leaders said they “completed the work” of the protesters and have promised to quickly put a “transitional council” in place.