The Mediterranean country controls the city-state of Ceuta which is on the African mainland but technically Spanish soil. With Pedro Sanchez’s country being part of the EU this has made it an attractive prospect for thousands of desperate migrants in search of a better life in the EU.

Under rules enforced by Brussels, member states are obliged to take asylum seekers who arrive within their territory.

To counter these attempts Ceuta, along with the fellow Spanish city state Melilla, have built a 32-foot high fence to stop migrants crossing the border.

But by this morning around 6,000 people had successfully overcome the obstacle, the Spanish government said.

Around 1,500 are thought to be teenagers. 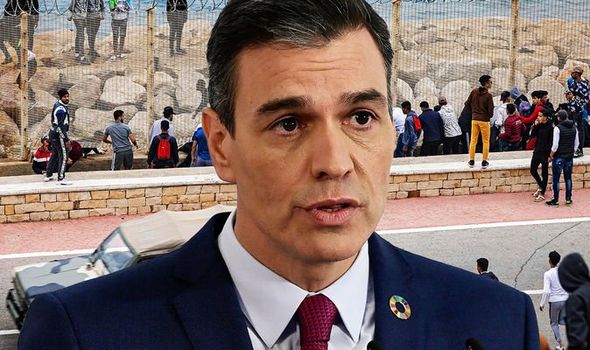 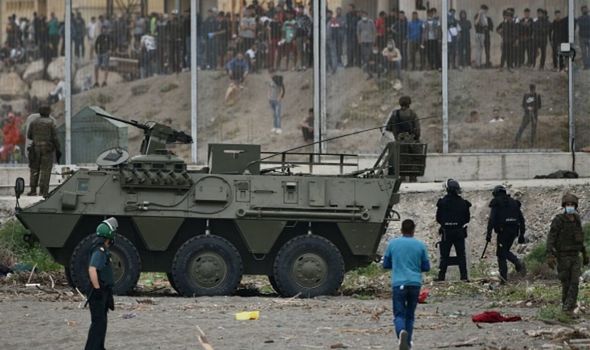 The city state’s president, Juan Jesus Vivas, blamed the Moroccan government in Rabat for allegedly allowing so many migrants to descend on Ceuta’s border.

He suggested it was in retaliation for Spain helping Brahim Ghali, the head of the Polisario Front that has fought Morocco over control of Western Sahara.

Morocco annexed the sprawling nation on the west coast of Africa in 1975 prompting a bloody 16-year war of independence.

He said: “It’s such a strong invasion that we are not able to calculate the number of people that have entered.

DON’T MISS:
EU crisis as recovery fund’s failings summed up by brutal analogy [ANALYSIS]
China forcing India, Australia and US to unite in preparation conflict [INSIGHT]
‘These are our lands and our waters!’ Putin issues warning to world [REVEALED] 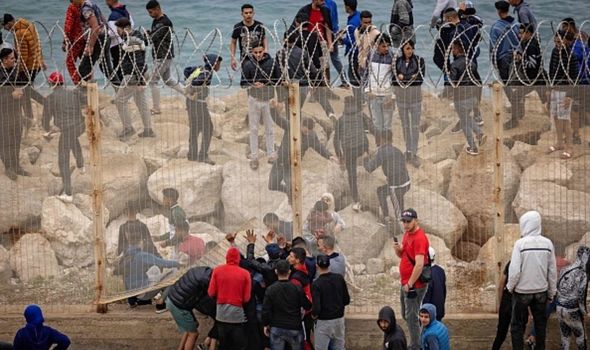 “The army is on the border in a deterrent role, but there are great quantities of people on the Moroccan side waiting to enter.”

The conservative politician said the residents of Ceuta were in a state of “anguish, concern and fear”.

The Spanish government distanced itself from his comments, firmly rejecting the notion that Morocco is punishing Spain for its humanitarian move.

Interior Minister Fernando Grande Marlaska said that authorities had processed the return of 1,600 migrants by this morning.

This is because Morocco and Spain signed an agreement 30 years ago to return anyone who swims into the territory.

But before being booted back to the North African state, video showed scores of migrants arriving on Spanish beaches.

They were greeted by a line of Spanish police and border guards before being returned to Morocco. 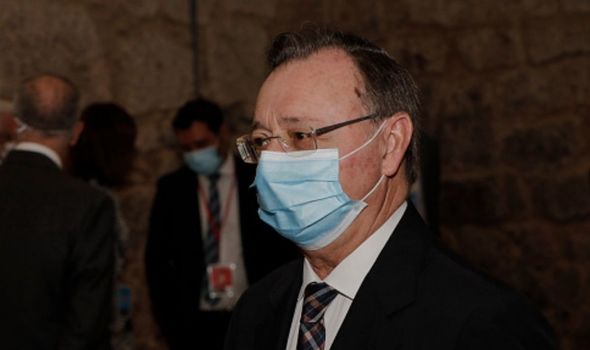 In Melilla another 80 migrants entered the city state by jumping over the enclave’s fence, authorities said.

This week’s figure is vastly more than the 2,228 migrants who successfully crossed into the two enclaves by sea or by land last year,