This is the shocking moment yobs launched a firework at an elderly man’s window in a ‘desirable’ street.

The midnight rocket blast was caught on camera by two different residents of Fortyfoot in Bridlington, East Yorkshire, at around 11.30pm on Sunday.

A horrified woman, who lives opposite, described hearing what sounded like an ‘explosion’ as her two young children slept.

‘We heard a big explosion and looked out and saw smoke so rang the fire brigade,’ she said.

‘They were on their way. We spoke to the police. We then looked at the footage and rang the fire brigade and said it’s a firework.’ 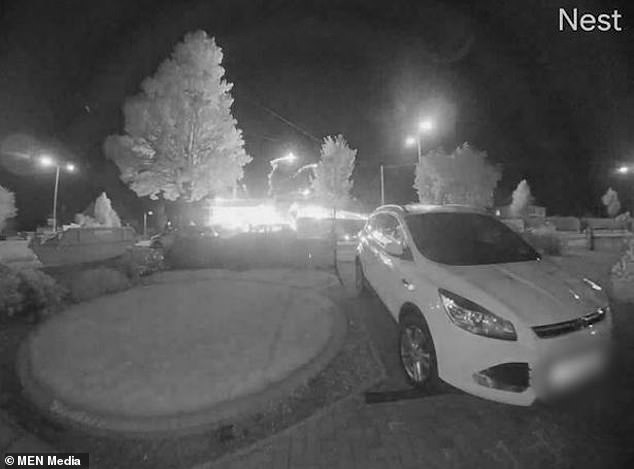 The woman, who wishes to remain anonymous, says that, about 10 minutes afterwards, she saw a ‘suspicious’ man lurking.

‘We watched this car circle up and down,’ she said. ‘It pulled up in the bus stop, the man got out and was looking through the back doors and opened his boot up. He saw us looking and got back in the car and drove off. I think he got scared off.’

The resident says that she thinks the car was white or silver and could have been a Renault Clio or a Mitsubishi Colt.

She described the man as middle aged, with dark hair. She says he was quite short but of a stocky build. 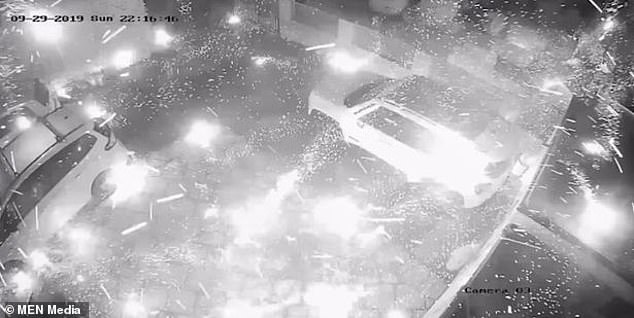 Pictured: The firework bursts at the home of the elderly man in Bridlington, East Yorkshire, on Sunday night

‘About five minutes later, the fire brigade turned up,’ she said. ‘The whole street was lit up.

‘They were aiming for his top window. The window might have been open a bit. It bounced off his top ledge. It was found on the floor in front of the garage.’

Everything was checked by us and the fire department. ‘Upon reviewing our CCTV, we saw it was a large firework aimed at the neighbours’ window, which ricocheted onto our garage roof and blew up there.

‘Police were contacted by the neighbour for his safety and the investigation is as far as being a man in his 40s who had circled the area three or more times before setting the firework off and the footage is from our home CCTV.’

A spokeswoman for Humberside Police urged anyone with information to contact them.

‘We were called at around 11.30pm on Sunday, September 29, with reports that a firework had gone off near to an address on Fortyfoot, Bridlington,’ she said.

‘No one was reported to have been injured in the incident, however, the resident of the house was left shaken.

‘A light-coloured car was allegedly seen in the area at the time and we ask its occupants or anyone that saw the incident to call us on 101 quoting log 594 of 29/09/19.’