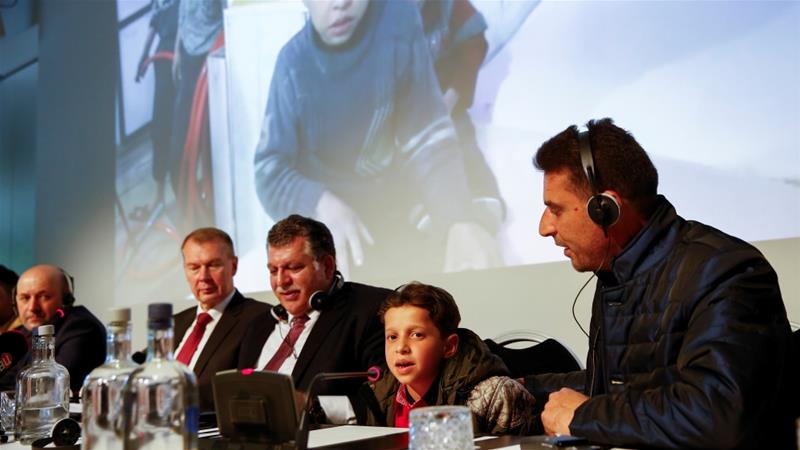 Russian officials have brought more than a dozen Syrians, including children, to the headquarters of the global chemical weapons watchdog to support their claim that a reported gas attack in Douma earlier this month was orchestrated.

The United States, Britain, France and their allies boycotted the event on Thursday at the Organisation for the Prohibition of Chemical Weapons in The Hague, Netherlands, branding it as “nothing more than a crude propaganda exercise” and an “obscene masquerade.”

The Syrians were flown to Europe to tell their stories at the OPCW, and then ushered into a room full of reporters at a nearby hotel where they all repeated nearly identical accounts. Russia said the statements prove that the alleged chemical attack on April 7 was staged.

Experts from OPCW are currently in Syria to investigate the alleged chlorine or sarin gas attack on Douma which, rescue workers and medics, said killed dozens of people.

The investigation was launched after videos of the apparent attack surfaced and prompted unprecedented Western attacks on Syrian military installations.

But Syria and Russia have accused volunteer rescue workers operating in Syria’s rebel-held territories, known as the White Helmets, of staging the footage.

In one of the videos, a young boy identified as Hassan Diab is seen being hosed down and shivering.

At the press conference in The Hague, Diab said that he did not know why people began pouring water on him in the hospital.

“We were in the basement. We heard cries on the street that we should go to the hospital. We got scared,” Diab said.

He was among a dozen people presented as victims or doctors or hospital workers, who all told similar stories – that someone had shouted out “chemical weapons” as hospital staff were treating injured people from a missile bombardment and panic spread.

“Unknown people started creating chaos, and pouring water on people. We were specialists and we could see there were no symptoms of the use of chemical weapons,” said physician Khalil, who said he was on duty in the emergency care unit.

He said “patients with choking symptoms” had begun coming to the hospital about 7:00pm, but it “was the result of people breathing in dust and smoke” from the bombardment.

Everyone was treated and sent home, Khalil added, denying reports from the Syrian American Medical Society (SAMS) and the White Helmets who jointly said dozens of people had died.

“After this briefing, no one would have a shadow of a doubt who distributes fake news and who is waging an information war,” said Russian Ambassador Alexander Shulgin.

Britain boycotted the group’s earlier briefing at the OPCW, saying it was a stunt, in a move followed by France, the United States and EU countries.

“The OPCW is not a theatre. Russia’s decision to misuse it is yet another Russian attempt to undermine the OPCW’s work,” Peter Wilson, Britain’s ambassador to the OPCW, said in a statement.

“This masquerade only betrays the huge nervousness of those who organised it and who have the most to fear from the OPCW investigation,” Lalliot said.

Al Jazeera’s Sonia Gallego, reporting from The Hague, said that there was no scientific evidence to support the eye witness reports and videos presented.

“We have absolutely no concrete evidence that these indeed are the people that were at the site and that there is truth to this,” Gallego said.

“The witnesses had very similar statements in how they described things, but no documentation was provided with reference to their identification at all.

“It’s quite difficult to see how this would have been intended to make anything clear because we’re really left with more questions than answers to this whole situation and that’s only something the OPCW can resolve with evidence from the ground.”

The OPCW also criticised the meeting in its headquarters, saying it had recommended to Russia that it should wait until its inspectors had completed their work.