A required Zoom lecture at a public university in New York City devolved into a pro-Palestinian protest, as many students and at least one professor “hijacked” the planned curriculum and read out what has been described as anti-Semitic tropes about the conflict in Israel and the Gaza Strip.

A group of Jewish students at the Silberman School of Social Work at Hunter College, CUNY described to Fox News now being fearful of returning to campus for in-person instruction in the fall.

During the organized intervention that some say resembled a “Zoom bombing,” many of the nearly 200 participants in the class changed their backgrounds to Palestinian flags and their names to “Free Palestine: Decolonize.” While protesters took turns reading out a manifesto, the chat section was also flooded with comments — one of which said that Israel uses the Holocaust as “a tool.”

“They were totally and completely demonizing Israel, and I was so horrified, I was sick to my stomach. I was so taken aback, and to be honest this is the most anti-Semitic I’ve ever seen with my own,” one Jewish student in the class, who wanted to remain anonymous, told Fox News. “There was absolutely no room for anyone to talk against what they were saying… There was absolutely no voice for anyone pro-Israel at all.”

“The horrifying thing is that there were professors that were expressing their opinions on it,” she added. “They’re supposed to be the mediators in the discussion, not the ones who are fueling the fire.”

“I’m very nervous about the anti-Semitism that I would face going back in person, so being on Zoom is one step farther from the anti-Semitism,” the student said, explaining that she constructed her schedule next semester to remain mostly online. But many courses will return to in-person instruction.

It happened on May 20 in the 9 a.m. session of a course titled “Practice Lab,” which students say is meant to address forms of oppression seen throughout history. Professors met with smaller groups of about 15-20 students throughout the semester until coming together for a final send-off.

Video reviewed by Fox News showed that those involved in the protest for the next 20 minutes took turns reading a lengthy, prepared statement that affirmed, “Anti-Zionism is not equivalent to Anti-Semitism.” Professors did not intervene as protesters praised recent remarks made by U.S. Rep Rashida Tlaib, D-Mich., in which she accused Israel of subjecting Palestinians to a racist, “apartheid” system. 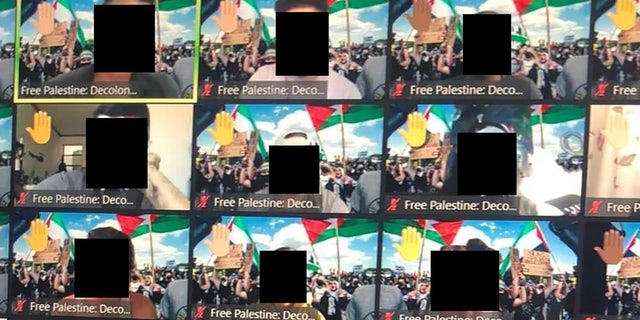 Screenshot taken from a video of the Practice Lab lecture on May 20 provided to Fox News. Students’ faces have been blocked out. The users changed their names on Zoom to "Free Palestine: Decolonize"

The statement read by some students also praised Black Lives Matter for “condemning the deadly, racist attacks from the Israeli state” and accused the U.S. of “colonization of Palestine through funding.”

“Israel has engaged in the ethnic cleansing of indigenous Palestinians from their land,” the protesters claimed in their prepared remarks. “This is not ‘two sides’ – it’s occupier and occupied. Like ‘All Lives Matter,’ talk about ‘two sides’ distracts from power imbalance and structural injustice.”

As discussion ensued in the chat section of the Zoom session, one user with the name changed to “Free Palestine: De-Colonize,” wrote, “The Holocaust has been used as a tool. The fear of anti-Semitism as the fear of ‘this could happen again’ is being used preemptively to oppress and kill others.”

That was one of the most blatant forms of anti-Semitism that happened during the required lecture, according to the several Jewish students who spoke to Fox News on the condition of anonymity. Six million Jews were systematically murdered by the Nazi regime in Europe during World War II.

“The comments on that thread were absolutely horrendous and really advocating for this mob mentality and this one side of a very complex issue,” a second student, a male who also preferred his name not be published out of fear of retaliation, told Fox News. “The fact that I don’t feel fully comfortable sharing my first and last name in an article, which is written about a fact that occurred, I think shows how Jewish students who feel strongly about the state of Israel are feeling at a public institution, which is funded by Jewish donors.”

“For professors who are the experts in this anti-oppression curriculum to not stand up or do anything or say anything to intervene was quite shocking,” a third Jewish student added. “What violence could have taken place if this happened in person? Because it really felt like a virtual mob.”

This comes as the NYPD has been investigating a series of separate anti-Semitic assaults and other hate crimes directed against Jews in the New York City area in recent weeks. The Anti-Defamation League detected a 70% rise in anti-Semitic incidents since the onset of renewed violence in Israel. 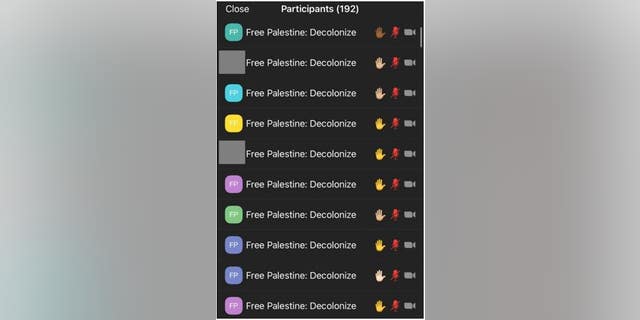 A second screenshot provided to Fox News shows that many of the 192 total participants on the Zoom call changed their names to "Free Palestine: Decolonize," therefore hiding their identities in the chat section.

“Hunter College is supposed to be a place of diversity and multiple opinions,” a fourth Jewish student in the lecture told Fox News. “I consider myself to be someone to be pretty progressive politically, and the fact that the same people who I’m sitting in class with and who are preaching ideas of acceptance have clearly made a point to shut out other voices in the room – for me, that’s extremely worrying. That’s concerning.”

A group of Jewish students and alumni who have met with the administration have accused the university of exhibiting a double standard when it comes to anti-Semitism – pointing out that the Silberman School of Social Work more boisterously condemned the rise in anti-Asian attacks seen nationwide earlier this year. And it also released its own statement separate from Hunter College’s version about the guilty verdict in April for former Minneapolis police officer Derek Chauvin convicted in the murder and manslaughter of George Floyd.

They say Hunter College released a statement about anti-Semitism – but the Silberman School of Social Work only separately addressed the issue when pressed and more quietly emailed its condemnation out to just those few who attended a meeting with members of the administration.

In a statement posted to the university’s website on May 26, Hunter College President Jennifer J. Raab denounced the outbreak of “hateful anti-Semitic speech” and “violent attacks explicitly targeting Jews on the streets of New York and around the country.”

“The age old threat of anti-Semitism has now escalated and sadly we are seeing an increase of such incidences,” the statement said. “We unequivocally condemn these verbal and physical assaults and reiterate our strong commitment to fairness, equity, and mutual respect.”

Fox News has reached out to the administration at Silberman School of Social Work and Hunter College for comment about the Practice Lab incident.

One Jewish student interviewed by Fox News pointed out that the Silberman School of Social Work is named after its founding dean, Dr. Paul Schreiber, who came to the U.S. in the early 1940s as a European Jewish refugee from central Europe who escaped before the borders were shutdown.

Another told Fox News he felt the need to speak out about what it’s like to be Jewish while attending Hunter College after the recent incident that happened at nearby Rutgers University. That public university located in New Jersey issued an apology to pro-Palestinian students after school officials first denounced anti-Semitism after a fraternity house was egged during a Holocaust remembrance event, then replaced the statement on the university’s website.