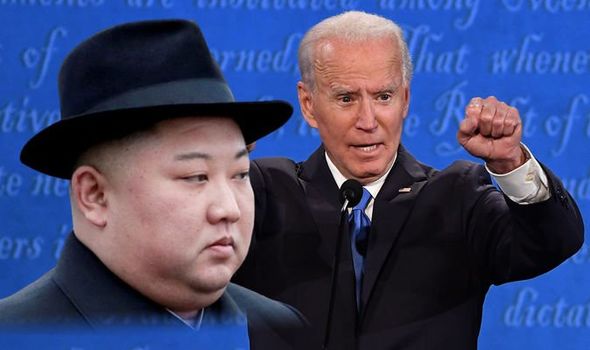 The President and former Vice President exchanged blows over Korean politics during tonight’s presidential debate in Nashville, Tennessee. Moderator Kristin Welker asked both candidates to discuss how they would tackle North Korea’s new intercontinental ballistic missiles and ensure peace with the country. Mr Trump also touted his administration’s record with Mr Kim over the last four years, blasting Barack Obama and Mr Biden for their stance on North Korea.

Mr Biden, responding to Mr Trump’s attacks on the Obama administrations relations with North Korea, hurled insults at Mr Kim and the President.

He said: “ He’s legitimised North Korea, he’s talked about his good buddy who is a thug, and he talks about how we’re better off.

“And they have much more capable missile, able to reach US territory much more easily than it ever did before.”

Mr Trump, at the end of the Democrats remarks, added: “Having a good relationship with leaders of other countries is a good thing.”

Mr Biden, in a brutal comparison, then said: “I understand we had a good relationship with Hitler before he in fact invaded Europe.”