Plumber tumbles into customer's flowerbed after tripping on plant pot

Watch your step! Hilarious moment plumber tumbles into a customer’s flowerbed after tripping over plant pot

This is the hilarious moment a plumber falls into a flowerbed outside a customer’s home after tripping on a plant pot.

Ricky Cooper, 42, from Stevenage, Hertfordshire, had arrived at a home to collect payment for an emergency job when he took a tumble on his customer’s doorstep.

A video doorbell filmed Ricky walking up the customer’s driveway and knocking on the door on June 9.

Plumber Ricky Cooper, 42, from Stevenage, Hertfordshire, knocks on the door at a customer’s house as he drops off keys and collects payment for an emergency job

As he steps away from the front door his left foot steps onto the rim of a plant pot which topples under his weight, taking him with it.

He reaches out to a nearby windowsill to catch himself but he doesn’t have enough grip to stop himself falling onto a low wall and then into a flowerbed.

Ricky is heard groaning as he lays in among the shrubbery with his legs dangling up in the air.

The homeowners come outside to answer the door and find Ricky still on the floor and ask if he is ok and he tells them that he smashed his head against their wall.

He escaped the fall with only minor cuts and bruising. 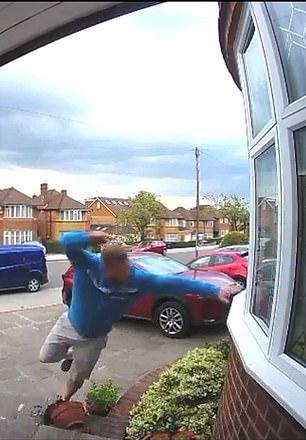 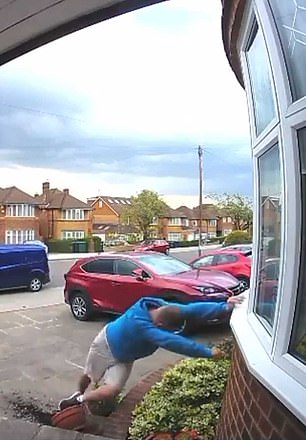 Ricky is heard groaning as he lies among the shrubbery with his legs dangling up in the air. He escaped with only minor cuts and bruising

Speaking about the clip Ricky said: ‘I was dropping off keys after doing an emergency plumbing job and picking up a cheque as well.

‘I was a little bruised and aching the next day but I will heal.’

Despite his minor injuries, Ricky saw the funny side in his fall and uploaded the doorbell footage to social media.

‘The reaction to it has been crazy,’ he said. ‘I thought 5000 by the end of the day if that and just hit a million, it’s blown my mind it really has.’

He uploaded the video, which has already been viewed more than 1million times, with the caption: ‘I had a little oops today at work.’

Rebecca Macdonald commented on the hilarious footage: ‘This made me giggle this morning.’

And Ella Noble replied: ‘I’ve watched this like 400 times hahaha.’ 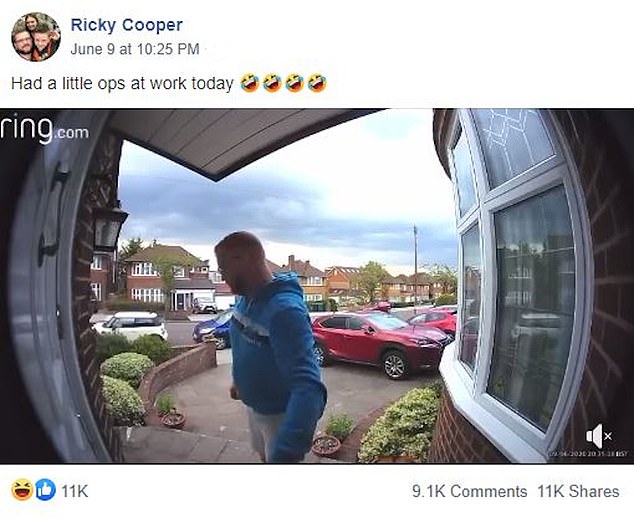 The plumber posted the clip on Facebook and people loved it. One person even said they’d watched the footage ‘like 400 times’